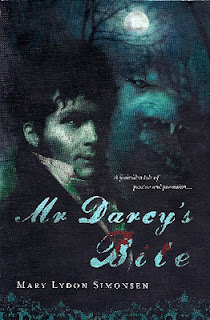 Here's a good read, and just in time for Halloween! Mr. Darcy's Bite is fun Pride and Prejudice werewolf story.  But this isn’t your typical werewolf story, it is a romance. Oh, Mr. Darcy is most definitely a werewolf, but this is not a gruesome story. In fact, Mary Simonsen made the whole werewolf thing to be very interesting and surprisingly organized!
After months of Mr. Darcy calling on Elizabeth, he still hasn’t proposed, and Elizabeth is getting annoyed by the whole business. Mr. Darcy is trying to figure out how tell Elizabeth that he is a werewolf. He takes her to Pemberley to tell her. While there she learns a lot about the werewolf community. She realizes the danger Darcy is in and how he needs someone next to him who can help him. She also discovers that he is not alone in the woods...there is a female wolf with him.
One of my favorite characters is Lord Fitzwilliam, the Colonel’s older brother. I love that he is a reoccurring character in Mary’s stories! He is such a lovable scoundrel! Another favorite of mine is Lady Marguerite, Darcy’s aunt on his father’s side.  She is a straight forward person, who tells it like it is. She's a hoot! I enjoy characters like that! Mr. Darcy has also surrounded himself with an incredible staff.
I could go on and talk about another scene in the story that I love but I don’t want to spoil it for you! Let’s just say I really liked this story!

I had a blast at my first AGM! It was four days of bliss, I mean what could be better than spending a long weekend with Jane Austen and friends! Let me tell you some of the highlights.
The first day was more than I thought it was going to be.  I was there much earlier than expected and was able to attend "The Mysterious Death of Jane Austen" given by Lindsay Ashford the author of a book with the same title. It was fascinating!  She gave a brief description of her background as a crime writer and how she came to live at Chawton and what led her to start investigating Jane's death. The book she has written is a fictional account of JA's death.
The next class "Managing Muslins" was not what I had hoped. There was a brief description about fabric but mostly on how to find things at thrift stores and making them work. She also touched on hats and accessories. I would have like to learn more about the fabric themselves and had swatches to look at.  It was still a good session and I did learn a few things. 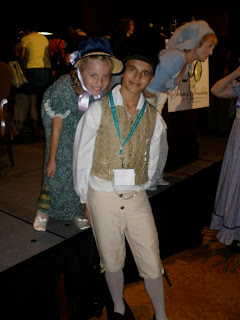 Here is a picture of the speaker's children modeling their regency attire.

I took an English Country Dance class, that was so much fun! I did better than I thought I would for the first three dances. The fourth dance I was totally confused, so I sat out the last!
The lectures by Dr. Joan Ray and Andrew Davies were fantastic!  Andrew Davies brought video clips from his movies and discussed them. 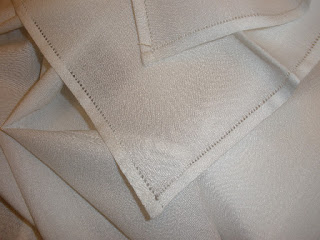 Isn't this picture of the stitching on this cravat beautiful? It is all hand stitched. 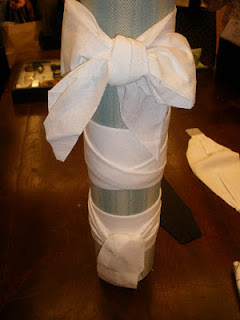 This was in the "Gentlemanly Pursuits" session, where I learn a little bit about snuff, tying a cravat and firearms. 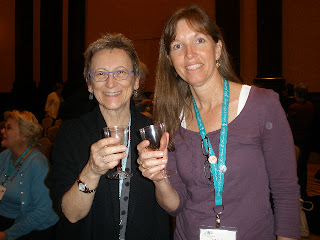 One of my favorite sessions was "Ports of the Period." Susan Mason-Milks and I went to this together. We sampled a couple of different ports.  Let me tell you they tasted smooth! It is something I'll be drinking again.  This was a fun session and all the women and gentlemen in the room seemed to have a good time...there was a lot of hooping and hollering going on! 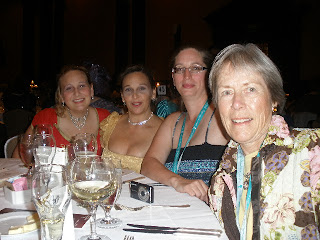 At the banquet I sat with these lovely ladies. Dinner and conversation was good! 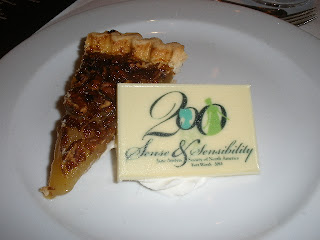 Look at this dessert! 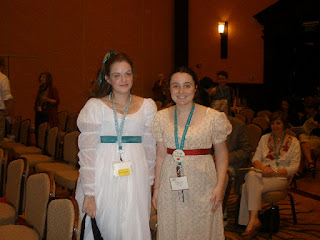 During "how to talk like Mrs. Palmer" these two young ladies demonstrated how girls can exaggerate speech. They did a great job! They weren't even part of the lecture! The speaker, Pat Michaelson, ask if anyone would like to come up and give a demonstration. They volunteered, unrehearsed and playacted, they sounded like two birds fluttering about.  Ms. Michaelson talked about exaggerated speech, using too many words like amazingly, horridly, monstrously, vastly, and the overuse of exclamation points. It totally reminded me of how I write on twitter!!! 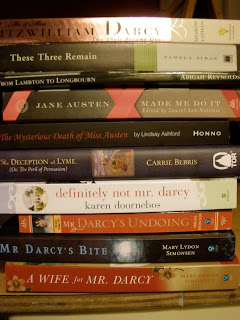 I went to a book launch and two book signings. I brought a stack of books home with me! 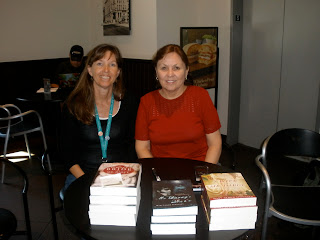 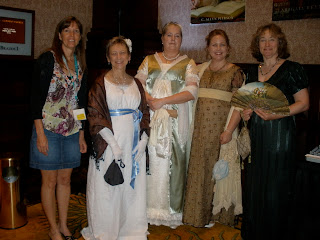 I spent sometime with some wonderful women!
All around I had a fantastic time!  I hope to do it again!  It was the perfect weekend! 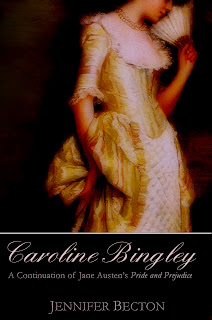 Caroline Bingley is a woman most people care little about...okay, dislike a lot. So why write a story about her?  Why indeed!  Jennifer Becton did a marvelous job writing this story.  We see Caroline for who she really is.  We see her struggle to get back what she lost or what she had hoped to gain, without having to admit doing anything wrong.
The story starts when Caroline is banished, by her brother Mr. Bingley, to the home of her mother and stepfather, Mr. and Mrs. Newton, in Northern England.  While in Kendal, Caroline forms a plan to get into the upper society, a place she has always wanted to be. An old school friend is back in the area with her brother, William Charlton, who, with the passing of his father, will become a baronet.  If she can marry him she can come back to London and not apologize for anything! Of course, every good plan has a few flaws.
Then there is Mr. Rushton, a person Caroline wants nothing to do with, but he is someone who stirs something inside her.
Before leaving London, Mr. Bingley has hires a companion for Caroline, Mrs. Rosemary Pickersgill. I love Mrs. Pickersgill!  She takes all of Caroline’s rude behavior with such dignity and in the end proves to be a great value.
Mrs. Pickersgill and Mr. Rushton were my favorites! They didn’t let Caroline get away with much and they helped her see things clearer.
Amazing! I actually came to care for Caroline Bingley!  This is a great story!
5 out of 5 stars!

Tell me what you think.  I would love to hear from you! 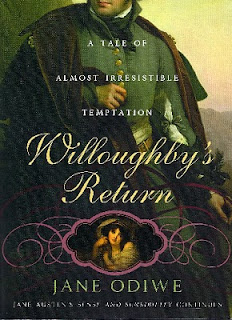 I’ve just finished reading Sense and Sensibility with IndieJane Book Club, so I decided I should read Willoughby’s Return (a sequel to S&S) right after. I am so glad I did!  The book was really good!
It’s roughly three years later, Marianne is very much in love with her husband Colonel Brandon.  Things are not always smooth sailing for the couple.  Whenever a letter arrives from Eliza, Colonel Brandon’s ward, the Colonel is off to Lyme to take care of whatever is ailing her or her daughter.  Marianne is jealous and resentful of the relationships his has with them.
Marianne hasn’t seen Willoughby in those three years. Suddenly he is back in there lives, showing up at functions that they are attending.  While Brandon is out of town, Willoughby tries to find opportunities to speak to Marianne. This creates more tension between Marianne and Colonel Brandon.
Margaret Dashwood is now of age and has a love interest, Henry Lawrence.  Unfortunately he is friends with Willoughby! There is also a mystery between Henry and Mademoiselle de Fontenay. To me, Margaret is a combination of Elinor and Marianne, doing somethings without thought of the consequence and then behaving sensibly at other times.
Mrs. Jennings is still her happy meddlesome self! Always assuming love matches and spreading gossip.
I really enjoyed reading this story. I give it 4 out of 5 stars.