Hello there, my friends! I was thrilled to be included in this blog tour! I have always wanted to read one of Stephanie Barron's Jane Austen mysteries, but never got around to it! Like my title and tagline say, "So little time... ...so much to read!"  It's so very true! 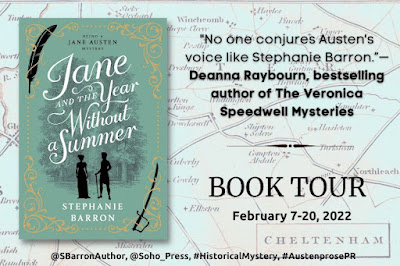 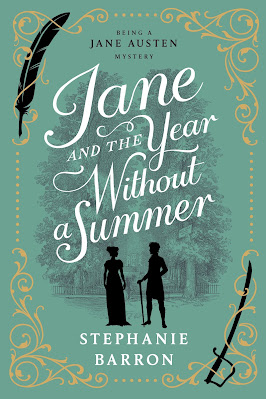 Jane and the Year Without a Summer
Being a Jane Austen Mystery, Book 14
by Stephanie Barron
Publication Date: February 8, 2022
Publisher: Soho Press
Pages: 336
Received: I received a paperback from the publisher for my honest review.
Rating: 4 stars.
Book Description
May 1816: Jane Austen is feeling unwell, with an uneasy stomach, constant fatigue, rashes, fevers and aches. She attributes her poor condition to the stress of family burdens, which even the drafting of her latest manuscript—about a baronet's daughter nursing a broken heart for a daring naval captain—cannot alleviate. Her apothecary recommends a trial of the curative waters at Cheltenham Spa, in Gloucestershire. Jane decides to use some of the profits earned from her last novel, Emma, and treat herself to a period of rest and reflection at the spa, in the company of her sister, Cassandra.
Cheltenham Spa hardly turns out to be the relaxing sojourn Jane and Cassandra envisaged, however. It is immediately obvious that other boarders at the guest house where the Misses Austen are staying have come to Cheltenham with stresses of their own—some of them deadly. But perhaps with Jane’s interference a terrible crime might be prevented. Set during the Year without a Summer, when the eruption of Mount Tambora in the South Pacific caused a volcanic winter that shrouded the entire planet for sixteen months, this fourteenth installment in Stephanie Barron’s critically acclaimed series brings a forgotten moment of Regency history to life.
My Review
Jane and the Year Without a Summer is the 14th book in Stephanie Barron’s Jane Austen Mysteries series and the first one I have read! Saying that I can tell you that I found this to be an excellent stand-alone. So don’t worry, you can read them in any order!
I was very impressed with Barron’s research into Jane Austen’s life and how she combines real and fictional to write a remarkable story. The mystery was well done with some nice twists.
Jane and her sister Cassandra take a trip to Cheltenham Spa to drink the waters and consult a doctor concerning Jane’s ill health. While there, they meet some interesting people and find a mystery to unravel! I love how tenacious Jane is - she notices the small details that seem to go unnoticed by everyone else.
I did find the first half of the book slow, but I loved the second half! I’m also a fan of footnotes and was happy to see them sprinkled throughout the story!
Knowing what we know about Jane’s health and that Barron follows Jane’s life pretty accurately makes the ending bittersweet.
Jane and the Year Without a Summer is a delightful read! If you love Jane Austen mixed with a bit of murder, masquerade, and intrigue, this is the book for you (and probably the series as well)!
FTC Disclaimer: I received a paperback of this novel from the publisher for my honest review.
Purchase Links
Amazon (paid link) • Barnes & Noble • Book Depository • Bookshop • Bookbub
Add to Goodreads
FTC Disclaimer: Link to Amazon. I am an Amazon Associate. Should you purchase a copy of the book through the link provided, I will receive a small commission. Thanks!
About the Author 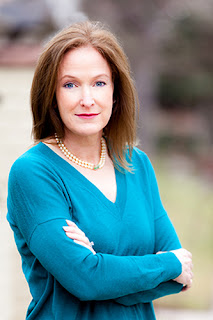 Francine Mathews was born in Binghamton, New York, the last
of six girls. She attended Princeton and Stanford Universities, where she studied history, before going on to work as an intelligence analyst at the CIA. She wrote her first book in 1992 and left the Agency a year later. Since then, she has written twenty-five books, including five novels in the Merry Folger series (Death in the Off-Season, Death in Rough Water, Death in a Mood Indigo, Death in a Cold Hard Light, and Death on Nantucket) as well as the nationally bestselling Being a Jane Austen mystery series, which she writes under the penname, Stephanie Barron. She lives and works in Denver, Colorado.
Connect with Stephanie Barron
Website • Twitter • Facebook • Instagram • Pinterest • Bookbub • Goodreads
Many thanks to Laurel Ann Nattress of Austenprose PR for organizing and including me in this tour!
Congratulations to Stephanie Barron on the release of Jane and the Year Without a Summer!
So friends, any thoughts? I'd love to hear from you!
Posted by Candy @ So little time... at 12:30 AM 4 comments: