Hello, my friends! Today I'm delighted to be part of the Kiss Me Good Night Major Darcy by Georgina Young-Ellis Blog Tour! I hope you enjoy the excerpt, and make sure to enter the giveaway! Details are on the bottom of the page! 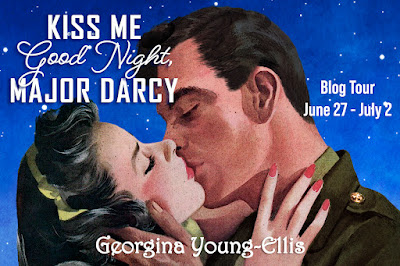 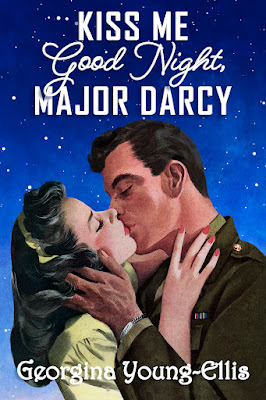 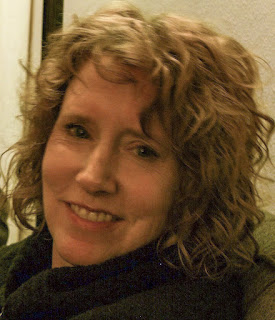 Georgina lives in Portland, Oregon with her husband, Jon, who
is an artist and professor of Media Arts. In 2015, they moved from New York City, where they lived for eighteen years, to Portland Oregon. Their son, a professional musician and sound engineer, still lives in Brooklyn. Georgina is a member of the Screen Actors Guild and was a stage actress for many years. Born and raised in the Southwest, she went to school in New York, graduating from New York University with a Bachelor of Fine Arts in Theater. She’s also a language professor and, of course, a writer, recently graduating from Portland State University with a master’s degree in Spanish Language and Literature. In 2022 she was awarded a Fulbright Fellowship to identify and connect with emerging female writers in Mexico and support them to free their literary voices.
Connect with Georgina
Facebook • Instagram • Twitter • Nerd Girls, Romantics, and Time Travelers (Blog)
Blog Tour Schedule 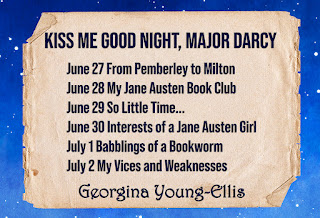 June 27 From Pemberley to Milton
June 28 My Jane Austen Book Club
June 29 So little time… - You're here!
June 30 Interests of a Jane Austen Girl
July 1 Babblings of a Bookworm
July 2 My Vices and Weaknesses
* * * Giveaway * * *
It's giveaway time! Meryton Press is giving away six eBooks of Kiss Me Good Night, Major Darcy by Georgina Young-Ellis. Enter through the Rafflecopter below.
Good luck!
a Rafflecopter giveaway
Congratulations to Georgina Young-Ellis on the release of her new book, Kiss Me Good Night, Major Darcy!
Many thanks to Janet Taylor @ More Agreeably Engaged for organizing and including me in this blog tour!
Wow! I really enjoyed that excerpt! I love to read about that time period. This looks like a book I would really like to read! What about you?
Posted by Candy @ So little time... at 12:30 AM 10 comments: