Alligators in the Trees By Cynthia Hamilton 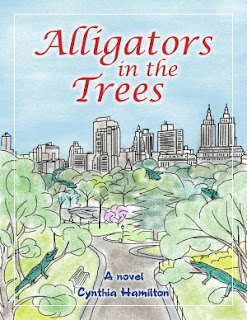 Priscilla is a waitress at Frank’s Coffee Shop, a dive in Manhattan. She is in her early 30’s and is going nowhere fast. Her track record with boyfriends is lousy, to say the least. She seems to only attract guys that are unable to find direction in their lives.
Enter Phillip and Tobias. Separately they both find their way into Frank’s Coffee Shop and into Priscilla’s life.
Phil has been eating breakfast, if you can call it that, at the coffee shop for months now. By the way he dresses, Priscilla knows he doesn't belong there. She suspects something must have gone terribly wrong in his life to bring him to a dump like Frank’s.
Priscilla recognizes Tobias Jordan, singer, songwriter and musician for the band Absent Among Us. She wonders what misfortunes have brought him to venture into Frank’s seedy coffee shop.
Three interesting characters whom fate has brought together.
Phil persuades Priscilla to go out to dinner with him. During the course of the evening, Priscilla learns about Phil’s troubles. He is a well known, award winning architect, whose building The Phoenix started to collapse and is scheduled to be demolished soon. His reputation is gone and now no one will hire him. He is in terrible financial trouble since he has invested all his money into this project. To top it off, his wife is divorcing him!
Tobias is trying to make a comeback but has lost his ability to write a meaningful song. The day he stumbles into the diner and meets Priscilla changes that as she inspires him to write more. Looking for more inspiration from her, he tracks her down to her apartment and learns she writes amazing lyrics. He convinces Priscilla to sell him stacks of journals, filled with her writings. After reading through them he goes back to her apartment but she has moved out. He feels lost with out her; she has become his muse.  Will fate bring them together again?
These two men feel like Priscilla is the answer to their problems. They persuade her to help them, but Priscilla has some issues she needs to work out in her life too. She is determined to start her life over and for once not take the easy way and cruise through life.
It was fun walking through the Manhattan, going into little dive bars to high class joints; seeing a variety of sides of life in the city.
This story was an interesting look at three very different lives. Each one of them has to look deep within themselves, which is not always easy.  I enjoyed reading it and was really into it, when I thought it was cut short. I didn’t feel like Tobias’s story was finished at all and I would have liked to have a little more closure with Priscilla’s story. The good news is there is a sequel in the works that starts up right where Alligators in the Trees leaves off!

Disclaimer: I was provided a copy of the book for review for my honest review.

Cynthia Hamilton has been writing for pleasure since 2000, when a series of bizarre physical problems forced her to find a creative outlet she could pursue from bed, if it came to that. Since then, she has written five novels and a memoir entitled “Once Upon a Lyme...” She loves the act of writing, of creating characters and setting them down in situations to see how they react. Most of her stories spring entirely from her overactive imagination, but “Lucky at Love” was inspired by meeting a man at a wedding who had been married and divorced seven times—seven or eight, he can’t remember which. Subtitled “Some guys just never give up…” Lucky tells the story of Allison Tyler-Wilcox, a journalist who meets Jake Sorenson at a wedding, a man who has been married and divorced seven times and has not foreclosed on the idea of tying the knot again. The relationship that springs up between the often combative duo makes for a true modern day love story.