Review: Still a Young Man: Darcy Is In Love By P. O. Dixon 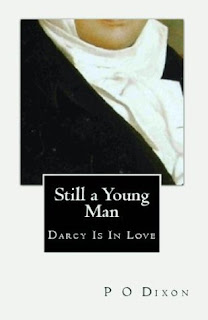 In this Pride and Prejudice variation, after being forced into a loveless marriage, Elizabeth, vows never to marry again. She has just come out of morning the loss of her late husband when she meets a young Mr. Darcy. After overhearing his disparaging words about her and her family Elizabeth thinks Darcy is overbearing, rude and pompous. As Darcy learns more about Elizabeth, he becomes intrigued by her. He sees a sadness in her that most don’t see and feels the need to protect her. Elizabeth however, is not willing to listen to him when he cautions her about the new friends she is  making.

Traveling to London with Jane and Bingley, Elizabeth is determined to enjoy the Season. She becomes friends with the widow Lady Marie Hargrove. Having received a nice settlement from her late husband, Lady Marie has money and independence, which she has no intention of giving up by re-marrying. Elizabeth is also receiving the attention of Lord Winthrop. Darcy, suspicious of both, tries to warn her but she is unwilling to listen to him.

I found Elizabeth to be a bit naive. She wants to have the freedom and fun she had before she married, but doesn’t realize the position she is in now. While she is dancing and enjoying the company of certain men, they on the other hand have entirely different ideas of what the company of a widow might bring. Also, I was not fond of the fact that Elizabeth is older than Darcy. It just didn't seem right with me, but I was able to ignore that and enjoy the rest of the story.

I always enjoy reading P O Dixon’s stories! Still a Young Man is a fun read with an interesting twist!

I purchased my own copy of Still a Young Man.

Buy a copy here.  (Disclaimer: Link to Amazon. Should you purchase a copy from link provided, I will receive a small commission. Thanks!)

P O Dixon writes Jane Austen Pride and Prejudice adaptations with one overriding purpose in mind—falling in love with Darcy and Elizabeth all over again. Her initial exposure to Pride and Prejudice was in 2007. After watching the 2005 film at least two times a day for as many weeks, she determined she needed to know much more of the story's hero. After reading the novel, along with several excellent ‘what-if’ books that told the story from Mr. Darcy’s perspective, she came across a link to the online Jane Austen Fan Fiction community. Her life has never been quite the same.

She lives in North Carolina with her husband and preteen daughter, Elizabeth.