Hey Everyone!! I'm so excited to be part of this fantastic announcement! Meryton Press is having this awesome short story contest!! Check out the information below! 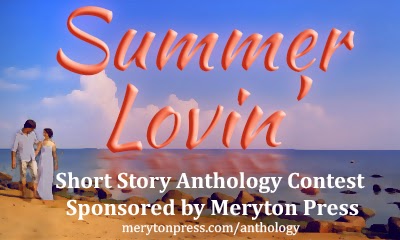 Meryton Press is conducting a contest to find the best short stories.

The theme of the contest, “Summer Lovin’,” represents the summer season. The interpretation of the theme is left to the writer’s imagination; the story may have summer as a backdrop or may convey a sense of happiness and light. It might be a romantic comedy set in the South Pacific, a thriller in the everglades of Florida, a romance in Queen Victoria’s summer court, an ode to the ocean and Elizabeth Bennet, or a mail -order bride in the Old West—anything your summer muse suggests.

Any genre is acceptable as long as there is ROMANCE. Austenesque is a plus, but is not required. In other words, so long as there is a commonly accepted or acceptable interpretation of the theme embedded in the plot, it works for us. However, this contest is not for children’s stories. Our target audience is readers over 18 years old.

The contest will be judged by a panel of independent judges, and the results will be announced by mid-April 2015.

In addition, all four winning entries will be published in an anthology planned for early summer 2015. The anthology will include not only the four winners but stories from Meryton Press’ popular and award-winning authors.

Contest Prizes: Prizes will be awarded as below. Payment will be through PayPal.

*Download the PDF file for detailed guidelines and rules at merytonpress.com/anthology.

*To receive email updates about this contest, sign up for the Anthology Contest Updates mailing list at merytonpress.com/mailing-list.
Posted by Candy @ So little time... at 12:30 AM