A Man of Genius by Janet Todd ~ My Review 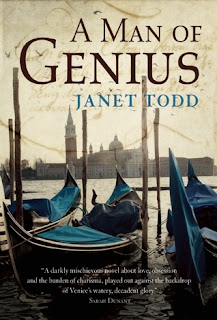 A Man of Genius by Janet Todd

A Man of Genius portrays a psychological journey from safety into obsession and secrecy. It mirrors a physical passage from flamboyant Regency England through a Europe conquered by Napoleon.

Ann, a successful writer of cheap Gothic novels, becomes obsessed with Robert James, regarded by many, including himself, as a genius, with his ideas, his talk, and his band of male followers. However, their relationship becomes tortuous, as Robert descends into violence and madness.

The pair leaves London for occupied Venice, where Ann tries to cope with the monstrous ego of her lover. Forced to flee with a stranger, she delves into her past, to be jolted by a series of revelations--about her lover, her parentage, the stranger, and herself. (blurb from Goodreads)

A Man of Genius is a dark and mysterious work of literary fiction. Set in the early 1800s London and Venice, the story has the tone of a book written in the same period, with a feel of a classic.

Ann St. Clair, a writer of Gothic novels, lives alone in London. She has no family except for a cousin she has recently become acquainted with and an estranged mother. Her childhood was not a happy one. Her mother did not approve of her and often called her stupid. She never knew her father except through bits and pieces her mother told her. After leaving her mother’s house,  Ann supported herself well enough writing her novels.

When Ann meets Robert James, she becomes infatuated with him. Robert James is a great thinker, a philosopher, a genius. Soon they become lovers. As their relationship goes on, Robert becomes moodier and physically abusive. Ann knows this is wrong but won’t leave him. The thought of losing him is unbearable. They travel together to Venice where things only become worse.

There are a few mysteries to be solved here. Who is Ann’s father? What happened to Robert James before she met him? Then there is the stranger who helps Ann in a most desperate moment. Who is he? And why did he help Ann? Was he somehow connected to Robert James or herself? Throughout the story, Ann wrestles with these questions.

I was fascinated by the fact that a woman could support and live by herself at that time in history. I always thought a woman had to be under the control of a man whether it be father, husband, relative or employer.  Also, the mention of passports and the documentation needed to travel during the early 1800s was very interesting to me - I didn't realize such things were necessary at that time.  Of course, they could not go together unmarried, so they needed false documents.

I did have a hard time at the beginning of the story, with Robert James. His views on politics and religion were a bit above me or just plain nonsense. Ann often described his ramblings as “rich nonsense” or “marble words” as they would just roll around not making sense.

A Man of Genius is a story of madness, obsession, and abuse, but also of reflection and personal growth.  If you like dark historical fiction, I think you will enjoy this one!

FTC Disclaimer: I received an ARC of the story from the publisher for my honest review.

Janet Margaret Todd is a Welsh-born academic and a well-respected author of many books on women in literature. Todd was educated at Cambridge University and the University of Florida, where she undertook a doctorate on the poet John Clare.

She is currently the Herbert JC Grierson Professor of English Literature at the University of Aberdeen. On 1 September 2008, Professor Todd took up the post of President of Lucy Cavendish College, Cambridge. She is the seventh President of the college.

Janet Todd's research concerns literature and culture of the Restoration and eighteenth and early nineteenth centuries. Over a long career, primarily in the US and the UK at Cambridge University, University of East Anglia, Glasgow University and University of Aberdeen, she has published and contributed to more than 38 books, mainly on women's writing, cultural history and the development of fiction. She also edited full scale editions of Mary Wollstonecraft (with Marilyn Butler) and Aphra Behn, as well as individual works of women such as Helen Maria Williams, Mary Shelley, Mary Carleton and Eliza Fenwick.

She is the General Editor of the nine-volume The Cambridge Edition of the Works of Jane Austen, editing the volume Jane Austen in Context and co-editing Persuasion and Later Manuscripts.