Hello, friends! I love a good western romance, and I'm thrilled to spotlight Knight on the Texas Plains by Linda Broday! I read this book about five years ago and really enjoyed it. Sourcebooks Casablanca is re-releasing it, and it has a beautiful new cover! 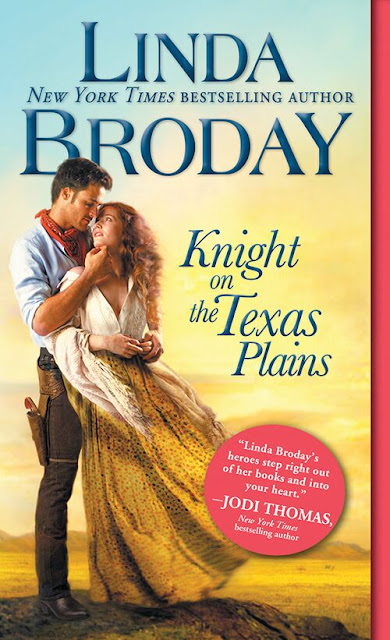 He’ll do whatever it takes
To keep them safe

Duel McClain has lost everything he’s ever loved: his wife, his son, his sense of self. But when a strange twist of fate—and a poker game he’ll never forget—leaves an innocent little girl in his care, Duel vows to defend his new family to his very last breath. If only he knew a single thing about taking care of babies…

Just as Duel swears his life can’t get any more complicated, a beautiful woman stumbles into the light of his campfire, desperate for help. Jessie Foltry is hungry, tired, and running for her life. She agrees to help Duel care for the child in exchange for his protection, even as she fights to guard her broken heart. But Duel will do whatever it takes to make Jessie see that the Texas plains have more than one kind of knight, and perhaps their salvation is closer than either of them could have dreamed…

Duel McClain lifted the whiskey glass and let the fiery elixir slide down his throat. The burning path brought an odd sort of relief, momentarily dulling the permanent ache in his belly. The dealer slapped three cards in front of him. Duel took his time picking them up. A baby, whimpering at the men’s feet, unraveled the tightly knit threads of his composure. How could he concentrate with that?

A glance at the first card revealed an ace of spades. He stuck it between the eight of hearts and the two of clubs in his hand. Then he turned over an eight of diamonds. A pair might take the hefty pot in the middle of the table—that is, if he cared enough to try. Shielding his last card from the curious eyes of his opponents, he lifted it slowly. An ace of clubs.

His blood turned to ice.

A resigned calm welled up. If lady luck rode with Duel tonight, the only space he’d take up would be on Boot Hill.

Something brushed the leg of his trousers. An animal must have sneaked under the swinging batwing doors and beneath the table. The baby’s sniffling grew louder. Tiny hands gripped his leg getting his attention. What in blue blazes? He leaned down. The baby had crawled to him and now tugged, trying to pull itself upright. Thin and dirty, the child stared up at him and he fought against the protective urge that rose at the sight of tears glistening in the kid’s big brown eyes.

The dealer broke his trance. Duel pitched two bits onto the pile. He just wanted to get this over with and leave. One by one each opponent around the table tossed down their cards in defeat until just two remained in the game—him and the stranger. The baby gurgled and played with the fringe running the length of Duel’s leg.

He shifted in his seat, feeling as if a gang of horse thieves had staked him out in a red-ant bed. If he had a lick of sense he’d fold and get the hell out. Deadman’s hand be damned.

A smug expression drifted across the face of the babe’s father when Duel closed up his cards, intending to lay them down. 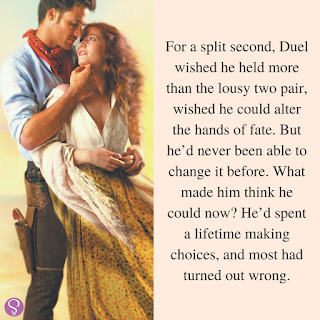 Revulsion made Duel ache to smash the stranger’s jaw. Instead, he reached into his pocket for six bits—all that he possessed. He hesitated for only a split second, glancing down at the filthy child who deserved more out of life than the sorry-assed father it had gotten. Then he shifted his gaze, savoring the look of surprise on his opponent’s face when he placed his bet.

The sour-faced weasel had been ready to reach for the pot, sure he’d won. His face colored. He was reduced to turning each of his pockets inside out for more coins. None came to light.

“Whatcha gonna do, Will? Either come up with more or Duel here wins.” The dealer’s impatience grew.

“Hold your horses.” The man named Will leaned down. “Gal, where’d you go? Git your useless hide over here to your pa. Don’t know why I didn’t drown you when you was born.”

So, the child was a girl. Duel reached down and drew her up.

The weasel snatched the girl by one fragile arm. “Tryin’ to steal my daughter?”

Ignoring the question and the loud wails that came from the child, Duel leaned forward to scoop up his winnings.

“Not so fast, mister.” Will sat the baby in the middle of the table. “I’m puttin’ up this here brat. She’s worth six bits, I reckon. You win an’ you got yourself a young’un.”

“I won’t gamble with a man’s flesh and blood,” Duel said.

The dealer frowned. “The bet’s proper, I say. Let’s get on with it. Show your cards, Will.”

Tears ran down the baby girl’s face leaving white trails amid the filth. For a split second, Duel wished he held more than the lousy two pair, wished he could alter the hands of fate. But he’d never been able to change it before. What made him think he could now? He’d spent a lifetime making choices, and most had turned out wrong.

“Quit your sniveling, you brat,” Will snapped at the child as he flipped his cards face up. Two pair also. Kings and deuces.

Quiet calm washed over Duel. He gave the group a wintry smile and revealed his hand.

“Aces n’ eights. Beats your pair, Will. Done in by the Deadman’s hand.” The dealer straightened his silk vest and poured himself a generous drink.

Duel stuffed the coins from the pot into his pockets. What on God’s earth did a man like him need with a babe? The girl had stuck a thumb in her mouth and sucked noisily on it between whimpers. He’d sooner grow wings and fly than take on the responsibility for another human being. The best thing would be to saunter out the door.

“Ain’t you forgettin’ something, mister?” Will’s nasty snarl whipped the stale air like a thin, razor-sharp piece of leather.

Much as he sympathized with the babe’s lot, he couldn’t accept her. “Take her home to her maw. Don’t have any need for a kid.”

Will grabbed his daughter’s sparse hair and pulled her small face next to his own. Ignoring her sharp cries, he yelled, “Ain’t got no maw. See there, Marley Rose. Ain’t no one wants you. You’re about as worthless as one of them Confederate greenbacks. Ain’t never goin’ to be any good for nothin’. Any o’ you cowpokes wanna buy a snot-nosed brat? Sell her cheap.”

Duel found himself reaching for the scared, helpless babe. “Changed my mind. Believe I’ll take what I won.” Tiny hands clung tightly to the neck of his collarless shirt as he strode for the door before he could backtrack.


At a young age, Linda Broday discovered a love for storytelling, history, and anything pertaining to the Old West. Cowboys fascinate her. There’s something about Stetsons, boots, and tall rugged cowboys that get her fired up. A New York Times and USA Today bestselling author, Linda has won many awards, including the prestigious National Readers’ Choice Award and the Texas Gold Award. She resides in the Texas Panhandle and is inspired every day.

It's giveaway time! Sourcebooks Casablanca is giving away a copy of Knight on the Texas Plains by Linda Broday! To enter, fill out the Rafflecopter below!


This is a group giveaway. So little time... is not responsible for books lost or damaged in shipping or any prizes shipped by publishers or authors.

Thank you to Sourcebooks Casablanca for including me in this blog tour!

Congratulations to Linda Broday for the re-release of this Knight on the Texas Plains!

Do you love western romances too? Share some of your thoughts below! :)
Posted by Candy @ So little time... at 12:30 AM