Hello, Friends! It's my stop at the A Most Handsome Gentleman Blog Tour! It's my pleasure to have Suzan Lauder here today, and she has a special treat for you! I hope you enjoy! 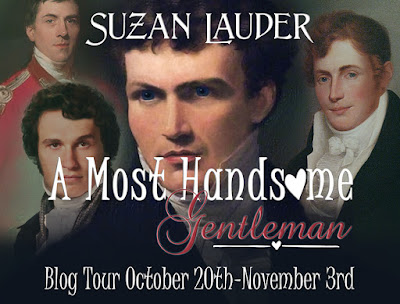 Mr. Bingley’s expected call did not come. Instead, a letter from Miss Bingley arrived for Jane. The missive stated that the entire Netherfield party had quit the county and departed for town and even implied that Mr. Bingley had a romantic interest in Miss Darcy. Miss Darcy? As I understood, she was but Lydia’s age, so I doubted Miss Bingley’s truthfulness—but maybe that was what Mr. Darcy meant to warn me of. Yet, on this point, I agree with Mr. Collins—neither is old enough for the seriousness of courtship. Mr. Darcy is unlikely to think much differently, and the match is undoubtedly the wish of Miss Bingley in order to get her clasping hooks closer to her prize: Mr. Darcy.

My cousin returned in time for dinner and did not give any indication of where he had been. Kitty and Lydia reported seeing him speaking to Mama shortly before we sat down. He was silent during the meal—that is, if one did not count the sighs and longing gazes at Jane and glares at my father.

In past evenings, my poor father had been left with the sullen man after dinner while the ladies withdrew, but tonight, Papa announced there would be no separation of the sexes, and he would go to his library alone. Mr. Collins dallied behind us; then he went back into the dining room, mumbling he forgot his watch. Why would he take his watch off its fob? My mother…

My mother! Oh no! Before they left the dining room, she had whispered to Jane that Cook had set aside an extra dish of pudding for her. The truth was now obvious: Mama had arranged for my poor sister to be left alone with Mr. Collins.

Jane would accept the baboon! She was far too kind and accommodating to hurt his feelings. And I was certain he chose this particular time because he knew Jane loved her pudding, and she would remain behind for another helping of this especially lovely dessert made with carrots, suet, treacle, currants, and the best spices in Cook’s kitchen steamed together and served with a sweet sauce. 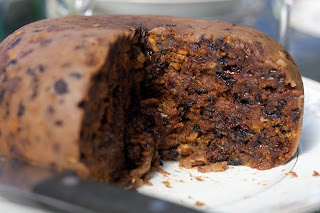 The instant my mother was no longer paying me notice, I sneaked back to spy on them, and I could not have been more correct. The large, heavy door was ajar, so I positioned myself at the corner to see through the crack between the brass hinges.

Jane was seated, dipping her spoon into the sweet, cake-like mound, swirling it around in the sugary sauce, and placing it on her tongue with an expression of pure ecstasy, completely disregarding every word Mr. Collins said. His form came in and out of my field of vision as he paced the room, droning on and on about marriage being a part of life.

I believe he must have stopped at one point because he was out of my sight. I knew him too well. The pause was to make an adjustment to his appearance—whether to twirl a lock of hair over his brow so it fell in exactly the right fashion, to brush the tiniest bit of dust from his shoe, or to examine his fingernails or the sleeves of his fine blue coat for inconsistencies. Mr. Collins was always taking a moment within his speeches to groom himself lest his appearance fall into that shady area of particular shame merely called tidy. Whilst he was out of my view, Jane stood and also moved out of sight. She shouted “Oh!” but the rest after that was muffled.

“Lizzy!” Mama was flapping her arm for me to move away from my spying position. Her glare chastised me for my curiosity, and I gave up my spot.

Less than two minutes later, Jane rushed into the drawing room where my sisters, Mama, and I were busy reading or doing needlework. “I may have killed him!”

Recipes from A Most Handsome Gentleman by Suzan Lauder

In a book where #HOTCollins declares the “biscuits too brown” and the “tea is too weak” (Chapter 2), some yummy treats are mentioned. Here they are as a special bonus from Suzan Lauder on her visit to So Little Time… today.

There’s no treacle (molasses) in my recipe for the pudding that Jane Bennet is indulging in when Mr. Collins becomes endangered by his own interference, but put that down to author embellishment of the ingredients for the story.

This dessert was what prairie farm women served instead of plum pudding at Christmas, since plums were harder to come by and too dear. Grandma Lauder was a Welsh-Scottish orphan brought up by an aunt who cared little to give her much of an education on the home arts. She learned to cook from her mother-in-law, and great-grandma Lauder was an American whose family was from England.

Be worried: this pudding is addictive!

~ Flaming with brandy is optional. Serve with your own sauce made from brown sugar and butter, caramel sauce, or a similar plum pudding sauce.


The “receipt” that Mr. Bennet insists be on the platter of treats when Lady Catherine visits Longbourn in Chapter 9 is from A New System of Domestic Cookery, formed upon Principles of Economy, and Adapted to the use of Private Families by Mary Eliza Ketelby Rundell, 1823. “Typos” are from the original.

Tea Cakes
Rub fine four ounces of butter into eight ounces of flour ; mix eight ounces of currants, and six of fine Lisbon sugar, two yolks and one white of eggs, and a spoonful of brandy. Roll the paste the thickness of an Oliver biscuit, and cut with a wine-glass. You may beat the other white, and wash over them ; and either dust sugar, or not, as you like.

Comments from Suzan Lauder on the Tea Cakes recipe:

~ I made this twice for my local JASNA meetings. It was fun weighing the ingredients on my kitchen scale and figuring out modern equivalents for what was not clear.

~ My adaptation for modern cookery: The first time I made these, I only had six ounces of currants, but that was plenty. I used regular granulated sugar and a tablespoon for the brandy. I had no idea how thick an Oliver biscuit was, so I rolled them about ⅜” thick and used a wine glass to cut them per directions. The recipe makes one dozen at this thickness and could be made thicker or thinner to taste. I baked them at 350ºF until the edges started to get golden, 25-30 minutes. They were quite sweet, and everyone declared them a success. The texture is like a chewy cookie. The second time I made them, I doubled the recipe, used the correct amount of currants, and rolled out half at a time, and they turned out just as well.

~ I like to imagine that Mrs. Hill of Longbourn could have written this cookbook once the girls were married off and she had more time on her hands.

~ The photo of currant biscuits or “Easter Biscuits” looks identical to the Tea Cakes I made from this recipe. Biscuits are cookies in the UK. It could be that this recipe evolved to be an Easter treat in the UK. I’ll eat them any time of year, as they are very yummy! 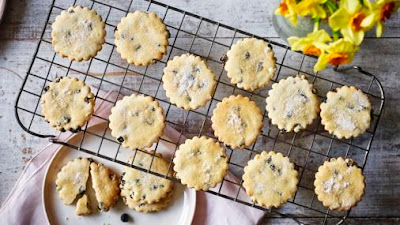 
Let us know if you enjoyed this post and intend to try the recipes by commenting below! 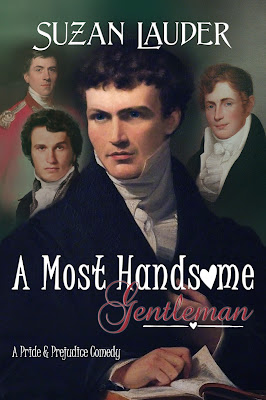 Elizabeth Bennet’s life is uncomplicated until she meets a quartet of new men: the haughty but handsome Mr. Darcy, the pert-with-a-pout Mr. Bingley, the confident and captivating Mr. Wickham—and then there is her father’s cousin, the happy man towards whom almost every female eye has turned.

Mr. Collins is HOT—well, incredibly handsome in Regency-speak—beautiful of face, fine of figure, elegant of air, his perfect clothing and hair matching his Greek god-like form. Unfortunately, when he opens his mouth, Elizabeth wishes he were mute. With affected servility and prideful self-conceit, he capitalizes upon his exquisite appearance and fixes on Jane Bennet as his bride.

Can Elizabeth and Mr. Darcy form an alliance to stop Jane’s suitors from issuing challenges—and will Elizabeth coax a smile from Mr. Darcy?

FTC Disclaimer: Links to Amazon US, paperback and Kindle. I am an Amazon Associate. Should you purchase a copy of the book through the link provided, I will receive a small commission. Thanks! 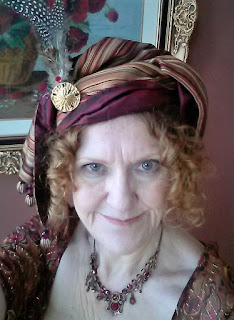 Her first effort at a comedy, A Most Handsome Gentleman is the fourth time Lauder has been published by Meryton Press. Her earlier works include a mature Regency romance with a mystery twist, Alias Thomas Bennet, a modern short romance Delivery Boy in the holiday anthology Then Comes Winter, and the dramatic tension filled Regency romance Letter from Ramsgate.

She and Mr. Suze split their time between a loft condo overlooking the Salish Sea and a 150-year-old Spanish colonial home near the sea in Mexico.


Suzan’s lively prose is also available to her readers on her blog, road trips with the redhead www.suzanlauder.merytonpress.com, on her Facebook author page https://www.facebook.com/SuzanLauder, and on Twitter @suzanlauder.

It's giveaway time! Meryton Press is giving away 8 (eight) E-copies of A Most Handsome Gentleman to 8 (eight) lucky winners! To enter, fill out the Rafflecopter below!

Many thanks to Meryton Press for this generous giveaway and to Janet Taylor of More Agreeably Engaged for organizing this blog tour!

Thanks so much to Suzan Lauder for stopping by today! Congratulations on the release of A Most Handsome Gentleman! And thank you for the yummy recipes! I enjoy cooking and especially love to make food from scratch. The Tea Cakes look delicious! I'm not sure about the Carrot Pudding though! ;)

Oh, my! What did you think about that excerpt?! Jane! What have you done?! Lol! And yes, let us know if you make the Carrot Pudding or Tea Cakes!