Hello, friends! Today I'm spotlighting a book that will be released in a few days, The Outlaw's Mail Order Bride by Linda Broday! I love mail order bride stories, and I was excited about the two in this story having an extra obstacle to overcome as they are both wanted! I've already read the story and loved it! I hope to post a review within the next couple of weeks.

Sourcebooks Casablanca is also giving away five copies of the book! Details are at the bottom of the page! 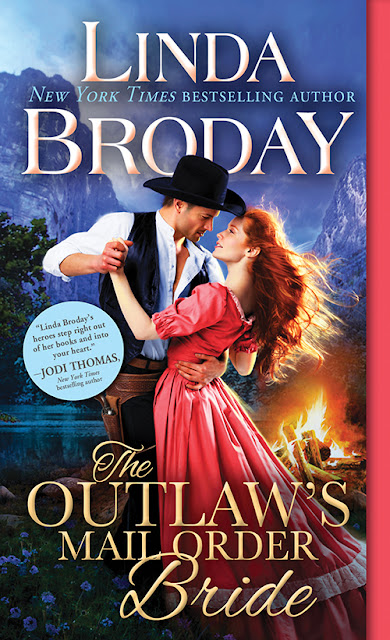 When the West was wild And man’s law favored the few These extraordinary women could be found… …in the heart of an outlaw.
Former outlaw Clay Colby is abuzz with his mail order bride’s expected arrival. He’s fought long and hard to drag Devil’s Crossing out of lawlessness…so when his homestead is set ablaze by a bitter rival, he’s heartbroken. There’s no woman in the world who’d stand by him now.

But Tally Shannon is no ordinary woman.

After escaping the psychiatric hospital in which she was wrongfully detained, Tally only wants someone to protect her and the little girl under her care. She doesn’t mind that Clay’s home is dang near burned to the ground—not when he makes her feel so safe. So cherished. But it’s only a matter of time before the ghosts of her past come calling…and her loving cowboy must defend his new bride—and the family they built together—to his very last breath.

Tally followed Clay into his dugout. She liked the strong set of his jaw and broad shoulders. He gave the impression that wouldn’t give under a heavy load. The two-inch scar down his face and the revolver swinging from his lean hip suggested he’d seen trouble too many times to count. His dark hair sported a few silver stands at the temples and curled possessively over his collarless shirt like a gunslinger’s hand around his gun.

She scanned the dim interior of the dugout, not caring that it was part of the hillside. She loved the scent of the earth and the safety Devil’s Crossing represented. A stack of uncut leather laid in a corner, and pink and yellow flowers on the table added an unexpected homey feel.

This outlaw was already surprising her in a lot of ways. Tally motioned to the leather. “What do you make?”

“Saddles, harnesses, boots, you name it.” Clay flicked her a nervous smile. “I know this doesn’t look like much, but it’s only temporary. As soon as I can, you’ll have a real house.”

Her mouth tried to turn up in a return smile but her nerves wouldn’t let it. She sat at the table in the chair Clay pulled out for her. “Don’t say anything you don’t mean. I’ve been lied to enough.”

Sunlight cast his shadow across the plank floor. “Look, Tally Shannon, I never waste words and what I say you can count on. I want something better for you, and already have the land picked out.”

Tally Shannon cleared her throat. “I have some things to ask of you, Clay. Refusal of any will be a deal-breaker.”

“Sounds fair enough. I’m sure you won’t need anything too difficult.”

“I’ll help build your town, share your bed, and raise your children.” She hardened her gaze. “In return, you promise never to put me back in the asylum and you’ll fight anyone who tries. Also extend that promise to Violet and if anything should happen to me, you’ll raise the child. You’ll never collect the reward that’s offered for me and I’ll never collect yours.” She paused before adding. “One last thing—you’ll release me next spring if this marriage doesn’t work.”

Clay brushed his fingers across her cheek that carried the mark. “You have my word on every stipulation.” His gaze shifted to the gun on her hip and she thought she saw admiration and some intimidation. “I only have one simple request. You have to promise never to shoot me, no matter how mad you get.”

“That depends on what you what do.” She leaned close, putting her lips next to his ear. “Hurt Violet and I’ll kill you in a heartbeat.”

He chuckled softly. “Trust me, I’d never be fool enough to cross you. Nor will I ever cause that little girl grief. That’s a vow I’ll never break.”

“Then we’re clear.” She straightened in her chair.

Clay leaned forward and lifted a tendril of hair, rubbed it between his thumb and forefinger. “Are you crazy, Tally?”

She allowed a smile. “Some would say that and at times I wonder. Back in Deliverance Canyon, I’d often wake in the dead of night and stand in the moonlight, letting the breeze brush my face. I needed the reassurance that I wasn’t back in that hellhole.”

“Do you mind if I ask why you were put there?”

“My stepmother put me there to get rid of me so she could steal what was mine. She told them that I was a sexual deviant and preyed on children.” She hated her strained voice.

“I can tell you’re not. I assume she had a ruthless plan.”

Tally’s voice turned cold and hardened. “When my father died, he had quite a large estate that included land, money, and other possessions. He left everything to me which angered my stepmother. She put something in my food that made me deathly ill and unable to fight her or speak. Some men loaded me into a wagon and Lucinda drove me to the Creedmore Lunatic Asylum.”

“I’ve heard of the place. Most never escape—except in a coffin. You were lucky, Tally.” 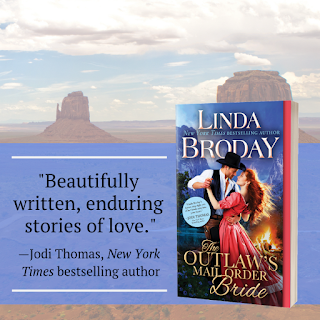 “A fierce determination helps. I was there a year and suffered—” her voice broke. She forced calm and continued. “Crimes you couldn’t imagine. But it only strengthened my resolve. I watched and waited for the right opportunity and when it came, I took it. Five of us broke out that moonless night. I’ve been back several times, once recently, for others like me.”

“Why do they want to imprison perfectly healthy women? What do they gain?”

“Money. Families pay a good deal to get rid of who they want. Men are getting rich off them and it’s become a big rotten business.” She watched his eyes darken, his anger build.

He let her strand of hair fall from his fingers. “Why was Violet there?” he asked, his voice tight.

“Her parents thought raising a blind child too much trouble.”

“Dear God! Such fools.” Clay rose to stand at the thick window.

She didn’t know what the tall, broad-shouldered outlaw was staring at, but the muscles of his jaw clenched tight, speaking of deep anger. He might convince himself that he was through dispensing justice but she could see that it continued to burn.

Could such a man love her?

An ache filled Tally. Could he make a little room in his heart for her?

She bit back a sob that tried to escape. Would she ever find someone who loved her fully and completely? Or would she have to settle for less as she’d always done? She was weary of settling. She wanted to be all of someone’s world, not just a part. She yearned to fill a man’s heart so full that his love for her spilled out all over the place.

At a young age, Linda Broday discovered a love for storytelling, history, and anything pertaining to the Old West. After years of writing romance, it’s still tall rugged cowboys that spark her imagination. A New York Times and USA Today bestselling author, Linda has won many awards, including the prestigious National Readers’ Choice Award and the Texas Gold. She resides in the Texas Panhandle where she’s inspired every day.

It's giveaway time! Sourcebooks Casablanca is giving away 5 copies of The Outlaw's Mail Order Bride! To enter, click on the Rafflecopter link below!


Congratulations to Linda Broday on the release of The Outlaw's Mail Order Bride!

And many thanks to Sourcebooks Casablanca for including me in this tour!


So, what did you think about that excerpt? Do you love mail order bride stories as much as I do?
Posted by Candy @ So little time... at 12:30 AM