Hello there, my friends! I'm delighted to be part of the Death Takes a Holiday at Pemberley Blog Tour! I have a lovely excerpt for you, and there's a chance to win an e-copy of the book! Details are at the bottom of the page. 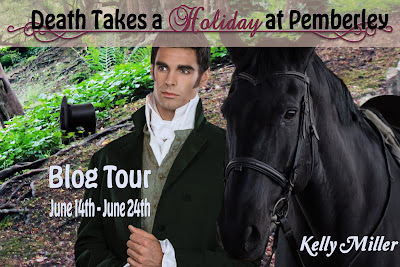 When Darcy arrived home, he instructed a servant to have water sent up for a bath. In the main hall, he spun on his heel to face Mrs. Reynolds, who approached at a brisk pace.

The housekeeper’s forehead was replete with lines, and her words were rushed. “Sir, I am glad you are back. An incident occurred with Mrs. Darcy while you were out. She has recovered now, but she fainted while outside in the rose garden.”

His breath hitched. Elizabeth had never fainted before! His words rushed out in a booming voice. “Where is she now?”

Informed of his wife’s location, Darcy darted down the corridor towards the library. He halted at the entrance, transfixed at the sight before him. Elizabeth sat in a large chair with Bennet in her lap, reading one of his son’s favourite books. His breathing slowed. It was apparent that she was fine—not just fine but lovely and serene. He took another moment to savour the picture of his two most precious people on earth.

She raised her eyes to him and grinned as he entered.

He strode across the room to her side. “I was told you had fainted. Pray, tell me: How are you feeling?”

She reached her hand towards him. He took it, held it between his two hands, and then rubbed it as he searched her countenance.

“I am well, I assure you.” Elizabeth gave him an abashed smile. “I believe I did not drink enough water today. I feel rather foolish now.”

With a taut attitude, Darcy swallowed the words of admonition he might have uttered. He would have been more at ease had he insisted that, at least for the next few days, she keep a servant with her at all times, but his wife was certain to disagree.

Bennet grabbed the pages of his book, and Elizabeth gently worked his tiny hand loose lest he tear them. “How was your ride?”

He twisted his lips into a half-smile. “I found it more stimulating than I might have preferred.”

She raised her eyebrows at him.

As if tired of being ignored, the toddler said in a demanding, yet endearing tone, “Papa!”

Darcy leaned down to kiss Bennet’s forehead and then Elizabeth’s as well. “How is my boy today?”

He curled his mouth into a pout. “Want biscuit!”

Elizabeth rolled her eyes. “He has been saying that for the past ten minutes.” She leaned next to Bennet’s ear. “You need to eat your dinner first, my love.”

“No! Biscuit!” Bennet’s forehead took on a crinkled appearance.

She pointed to the set of blocks set out for his use. “Bennet, there are your blocks. Would you not like to play with them?”

He climbed down from his mother’s lap and busied himself with his blocks. It seemed the biscuit had been forgotten.

Elizabeth’s fond smile was directed towards their son as he played. Turning, she raised an eyebrow at him. “Considering his parents, it is no surprise the boy has a sweet tooth.”

She was correct. Until he met Elizabeth, Darcy was of the mistaken belief that his own exorbitant fondness for desserts was unsurpassed.

Bennet put together a structure that could best be described as a trapezoid. When it was clear that his attention was engaged in this project, Elizabeth rose and pulled Darcy to a nearby sofa so they could sit together. “Please tell me of your ride today.”

With his gaze focused upon his son, Darcy endeavoured to keep his tone calm and unfettered though his breathing became shallow at the memory. “I had a close call on one of the steep trails along the northern hills. Regal was startled by a snake. I lost my balance and almost went off the side of the path into the ravine. I thought I was done for, but I managed to stop myself in time.”

Elizabeth lifted his hand to her mouth and kissed it. Her eyes perused him with a flickering lustre. “Thank God you did not fall. You do not appear hurt.”

“No, I am unharmed. It was providential. I have asked for bath water to be sent up. I hoped you would join me.” His shoulders were taut, and his breath halted as he awaited her answer. He needed her in a way that defied explanation.

Biting her lip, she smiled back at him. “That is the best offer I have had all day.” 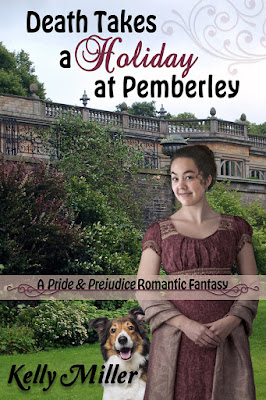 Death Takes a Holiday at Pemberley
by Kelly Miller

What will the master of Pemberley do when confronted with the mercurial whims of an all-powerful angel?

Fitzwilliam Darcy's well-ordered life is about to become a chaotic nightmare. A man of fortune, property, and social prominence, he has everything he could desire. Blissfully married to his wife, Elizabeth, they have a two-year-old son. With so much to live for, Darcy is shaken by a near-fatal riding accident. After a miraculous escape, he is visited by an otherworldly being: an angel of death named Graham. Threatening dire consequences, Graham compels Darcy to guide him on a sojourn in the world of mortals.

Darcy immediately questions the angel’s motives when he demands to be a guest at Pemberley. Can he trust Graham's assurance that no harm will come to his wife and child? And why does Graham insist on spending time with Elizabeth? How can Darcy possibly protect his family from an angel with power over life and death?

In this romantic fantasy, the beloved couple from Jane Austen's Pride and Prejudice must contend with both human and unearthly challenges. Are the fates against them? Or will their extraordinary love conquer all?
Buy: Amazon US • Amazon UK
Add to Goodreads

FTC Disclaimer: Link to Amazon US. I am an Amazon Associate. Should you purchase a copy through the link provided, I will receive a small commission. Thanks! 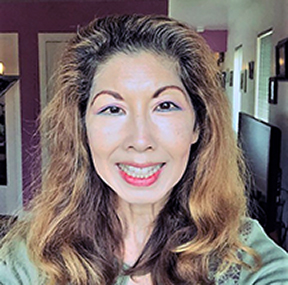 Kelly Miller discovered her appreciation for Jane Austen late in life, and her love of writing even later.  It was the 1995 miniseries of Pride and Prejudice that made her take notice and want to read the actual book.  It was many years later that she discovered the world of JAFF.  After reading a slew of wildly inventive stories featuring the beloved characters created by Jane Austen, she was inspired to write one of her own.  Now, writing is one of her favorite pastimes.  When not writing, she spends her free time singing, playing the piano, and working out.  (Yes, like Elizabeth Bennet, she is an excellent walker.)  Kelly Miller lives in Silicon Valley with her husband, daughter and their many pets.

It's giveaway time! Meryton Press is giving away 8 eBooks of Death Takes a Holiday at Pemberley! To enter, fill out the Rafflecopter below. 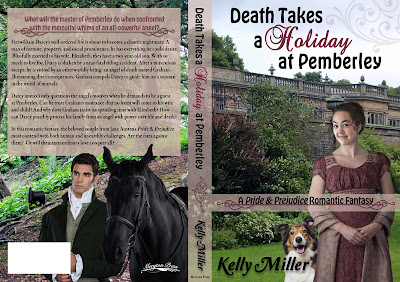 
Congratulations to Kelly Miller on her debut novel, Death Takes a Holiday at Pemberley!

Many thanks to Janet Taylor @ More Agreeably Engaged for organizing and having me on this blog tour!

So, friends, what do you think? An angel of death at Pemberley?? Wow! I'm all curious as to why this angel wants to spend time with Elizabeth. Hmmm...

Please, leave a comment or question for Kelly! We would love to hear from you!