Hello, my friends! Are you watching the Sanditon series on Masterpiece PBS?! Are you enjoying it? I've watched a few episodes, but I wanted to get my review of the book posted first. 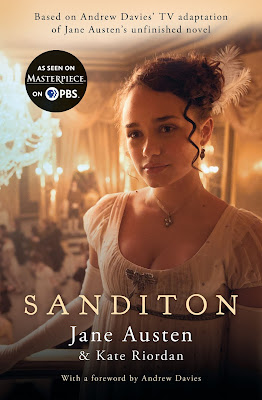 In the vein of Downton Abbey, Jane Austen's beloved but unfinished masterpiece-often considered her most modern and exciting novel-gets a spectacular second act in this tie-in to a major new limited television series.

Written only months before Austen's death in 1817, Sanditon tells the story of the joyously impulsive, spirited and unconventional Charlotte Heywood and her spiky relationship with the humorous, charming (and slightly wild!) Sidney Parker. When a chance accident transports her from her rural hometown of Willingden to the would-be coastal resort of the eponymous title, it exposes Charlotte to the intrigues and dalliances of a seaside town on the make, and the characters whose fortunes depend on its commercial success. The twists and turns of the plot, which takes viewers from the West Indies to the rotting alleys of London, exposes the hidden agendas of each character and sees Charlotte discover herself... and ultimately find love.

Jane Austen started writing Sanditon shortly before her death, and the story was never completed. Andrew Davies wrote an adaptation for British television, and Kate Riodan wrote this book, Sanditon, based on Andrew Davies' version.

Having read Austen's work, I had formed my own thoughts on what would happen in the story. (Jane only got as far as to introduce the town and the characters.) And this story was going along differently than the way I thought Jane’s would go. Sure, I thought the people in Sanditon were full of self-interest, but they didn’t seem as outwardly cruel. So I was having a bit of a hard time at first, but once I let that go, the story started moving for me, and I began to enjoy it!

And there is much to enjoy! There is an assortment of characters - some are charming, some are deceitful scoundrels, and some are downright cruel. There’s scandal, near financial ruin, and outlandish behavior. Sanditon has it all!

Of course, I loved Charlotte! She seemed to be the only one with a good head on her shoulders. Sidney started out very self-absorbed, but his hardshell started to crack with the help of Charlotte.  Mr. and Mrs. Tom Parker are charming! And I thought the hypochondriacs, Diana and Arthur Parker (brother and sister) were very amusing!

My thoughts on the ending… I wasn’t satisfied with it. I would assume they have plans on continuing the series. But I have not heard anything for sure. But if they wanted to hook you into watching the second season, or reading the next book, then they did an excellent job with the ending!

Altogether, Sanditon was an entertaining read! I enjoyed it, and I hope to see it continued!  - 4 stars

Kate Riordan is a writer and journalist from England. Her first job was as an editorial assistant at the Guardian newspaper, followed by a stint as deputy editor for the lifestyle section of London bible, Time Out magazine. There she had assignments that saw her racing reindeers in Lapland, going undercover in London's premier department store and gleaning writing tips (none-too-subtly) during interviews with some of her favorite authors. After becoming a freelancer, she left London behind and moved to the beautiful Cotswolds in order to write her first novel.

To read more reviews for Sanditon, check out the schedule below!

Many thanks to Laurel Ann Nattress of Austenprose for organizing this Review Roundup Blog Tour and for having me along!

Also a huge thanks to Grand Central Publishing for my paperback copy of Sanditon and for the beautiful copy of The World of Sanditon! Wow! Thank you!! 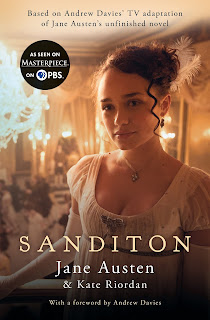 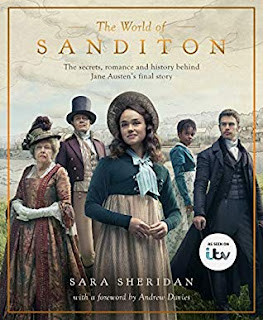 So, friends, what do you think? Have you read the book or watching the series? Let me know in the comments!
Posted by Candy @ So little time... at 12:30 AM 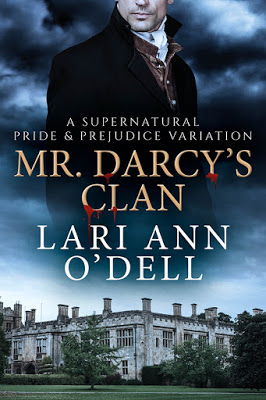