Hello, my friends! Today I have the lovely Mary Smythe visiting here with an excerpt from her new book, Dare to Refuse Such a Man! 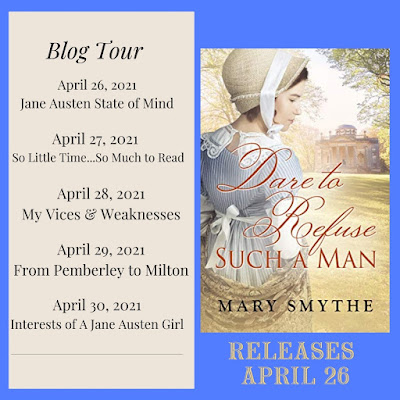 Thanks for having me on your blog today, Candy. It’s wonderful to be here!

This excerpt takes place during the earlier portion of Dare to Refuse Such a Man, while Darcy and Elizabeth are still in Derbyshire and busy falling in love with one another. They've had a few minor bumps so far—mostly due to Darcy’s pride and Elizabeth's wariness over his intentions—but Darcy’s on the verge of a proposal (one he'd hoped to tender a month prior) and Elizabeth on the verge of accepting him. Until...well, you'll see. The next scene after this one is where the bottom falls out.

Elizabeth sat in dazed happiness as she and the Gardiners trundled back to the parsonage from the dinner party at Pemberley, thinking fondly—more than fondly—of the master of that great estate.

What kept the irrepressible delight upon her face was the suspicion Mr Darcy—her sweet Fitzwilliam, as she referred to him when no one else was around to hear—might offer the proposal she had waited for these last weeks. As their party had donned their overcoats for the journey to Lambton, Darcy had very gently touched her elbow and led her to the side of the great hall.

“Miss Bennet,” he had said in a voice loud enough to be heard by the company around them. Eyes darting to see who might be listening before resting back upon her face, he had then continued in a much softer tone. “Elizabeth, might I…that is, would you grant me the honour of a private interview tomorrow?”

Elizabeth felt the same jolt of excitement pierce low in her belly as she recalled how pleasantly surprised she had been by the request and what it must mean. His earnest expression betrayed an endearing apprehension as he awaited her reply, and she had been charmed by his guileless eagerness.

“Yes.” The single word rushed out of her as it clung to her exhalation. “I would be happy to grant you a private interview, Mr Darcy. Fitzwilliam.” She had whispered his name at a register low enough for only him to hear.

Their gazes locked as Darcy lifted one of her hands and brushed his lips gently across her gloved fingers. “Until tomorrow, then.”

“Yes,” she repeated, her heart beating so rapidly it felt as if it would burst free of her chest and submit itself directly into his possession. He already owned it, after all.

Elizabeth broke from her reverie at the sudden intrusion of her aunt’s voice. Much the same had happened earlier when her family had reminded the couple, with indulgent amusement, it was time to depart.

Elizabeth turned her head to her teasing aunt, whose lips were curved upward in that knowing fashion she sometimes utilised when she suspected one of her nieces had a secret. Laughing, as she could hold it in no longer, Elizabeth replied, “Oh, yes, very well, indeed!”

Mr Burns, sitting directly across from her, snorted in his sleep at the sharp bark of her mirth and resettled into another position, his head lolled back against the seat cushions and mouth drooped open. Beside him, her uncle Gardiner’s attention turned towards his niece with an expression similar to his wife’s. “This would not be in any way related to Mr Darcy, would it?”

Elizabeth, though hardly ashamed of her feelings for the gentleman in question, could not help but blush. “Perhaps.”

Aunt Gardiner nudged her lightly with her elbow. “What has he done to make you glow in such a way, Lizzy?”

“He…” Elizabeth paused, biting her lip as she tamped down the excitement which threatened to bubble forth without filter. “He has requested a private audience with me. In the morning.”

As Mrs Gardiner exclaimed with joy and embraced her niece, Mr Gardiner asked, “He did, did he?”

Elizabeth, over her aunt’s shoulder, glanced towards her uncle to see him smiling at her with wry indulgence. He did not seem in any way perturbed by Elizabeth’s news but rather jovial.

“He did.” As Aunt Gardiner released her and settled back, Elizabeth asked, “Is aught the matter?”

Mr Gardiner chuckled. “No, no. I am simply amazed he was patient enough to wait so long.”

“It might not be a proposal,” she reminded them all, cautioning her own heart to rein in its expectations lest she be disappointed in the morning if he simply wished to discuss a book or his sister. She could not imagine why he would require a private meeting for such a conversation, but it would not do to inflate her hopes just yet.

Mr Gardiner guffawed. “Nonsense! He has been wanting to make his offer since he first approached me a month ago. I suspect he has been growing impatient awaiting Bennet’s response to the letter I sent a month ago. Honestly, it is much to the credit of his honour that he did not simply ignore my caution and propose already. I am much impressed with his fortitude.”

Elizabeth’s heart again fluttered rapidly as if it were ready to take flight and return to Pemberley. She hardly dared to believe her uncle. “Truly?”

“Truly.” The corners of Uncle Gardiner’s eyes crinkled fondly. “Can I assume you are inclined to respond favourably to him when he asks you this most important question?”

Elizabeth’s cheeks began to ache as her grin strained them. “You may.”

In the middle of her aunt’s renewed felicitations, the carriage lurched to a stop in front of the parsonage. Elderly Mr Burns was nearly pitched to the floor as he came awake with an exclamation—“I say!”—but was luckily kept in his seat by his diligent son-in-law’s quick, steadying hand. As this was occurring, the door of their conveyance was pulled open and a hand thrust inside to assist the passengers out.

Elizabeth, as the closest lady to the exit, placed her gloved palm upon it and exclaimed, “Papa!” 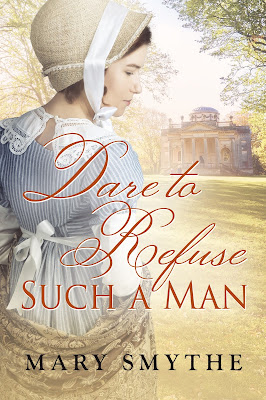 Dare to Refuse Such A Man
by Mary Smythe
“He is the kind of man, indeed, to whom I should never dare refuse anything which he condescended to ask.”
– Mr Bennet, Pride and Prejudice Volume III, Chapter 17
It had never occurred to Fitzwilliam Darcy that, once he had chosen a bride, her father might dare to refuse his consent. When his dearest, loveliest Elizabeth is taken from him with only a curt note of explanation, he determines that, far from accepting her father’s rejection of his suit, he must instead find her again and make his case. After all, a woman worthy of being pleased is also worth fighting for.
Several months shy of her majority, it is not so simple a thing to defy Mr Bennet’s will, but Elizabeth, for the sake of her future happiness, must try. With various allies in her corner, as well as foes standing against her, Elizabeth’s courage must rise against all attempts at intimidation. Even from her own, much beloved father.
Buy: Amazon
Add to Goodreads
FTC Disclaimer: Link to Amazon. I am an Amazon Associate. Should you purchase a copy of the book through the link provided, I will receive a small commission. Thanks!
About the Author 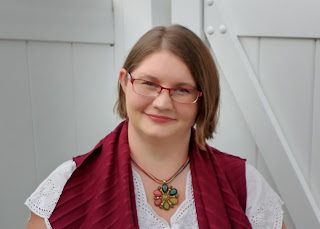 Mary Smythe is a homemaker living in South Carolina with a
rather useless BA in English collecting dust in a closet somewhere. Mrs Smythe discovered the works of Jane Austen as a teenager thanks to the 1995 BBC Pride and Prejudice miniseries featuring Colin Firth and Jennifer Ehle and has since gone on to read everything written by Ms Austen at least once yearly, always wishing that there were more. She has been writing since 2001, but only discovered Jane Austen Fanfiction in the summer of 2018. Dare to Refuse Such a Man is the first full-length novel she has ever completed, though she can boast a few shorter works in her library, as well.
Blog Tour Schedule
April 26, 2021 - Jane Austen State of Mind
April 27, 2021 - So Little Time...
April 28, 2021 - My Vices & Weaknesses
April 30, 2021 - From Pemberley to Milton
April 30, 2021 - Interests of A Jane Austen Girl
* * * GIVEAWAY * * *
Quills & Quartos Publishing will choose a lucky reader to receive a free eBook copy. To enter, all you have to do is comment on one or more blog tour posts. 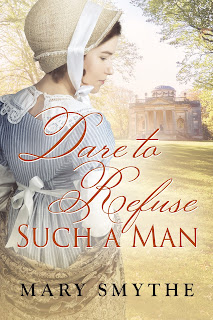 Congratulations to Mary Smythe on her debut novel, Dare to Refuse Such a Man!
Many thanks to Kristi with Quills and Quartos Publishing for organizing and including me on this tour.
So, friends, what did you think of that excerpt?? It looks like Elizabeth is in for some major heartbreak!
Posted by Candy @ So little time... at 12:30 AM