"Fitzwilliam Darcy, in His Own Words" by Shannon Winslow ~ Blog Tour ~ Guest Post

Hello, my friends! Shannon Winslow joins us today! She has a new book out, Fitzwilliam Darcy, in His Own Words. Very exciting!

Shannon shares with us how she, in her new book, fills in the blanks with "missing scenes" - I hope you enjoy it! 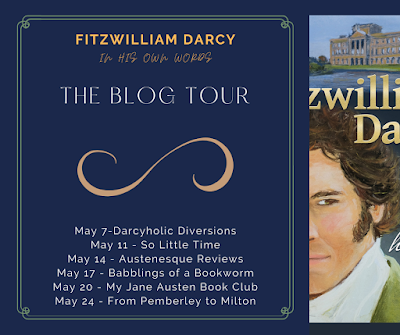 Filling in the Blanks

I’ve always enjoyed writing “missing scenes.” Perhaps Jane Austen has given us a clue to something but not described it in any detail. Perhaps she’s told us that something has occurred but hasn’t shown us, or she’s left a period of time altogether blank. These gaps are “missing scene” opportunities just begging to be written!

There’s a lot of that in this new book, Fitzwilliam Darcy in His Own Words – lots of blanks in Austen’s most beloved story that I was more than happy to fill in – some before the timeline of the original novel and others during it. Since Pride and Prejudice primarily follows Elizabeth’s activities, Darcy’s words and actions (except when he’s with her) are not shown. And as I started investigating, I discovered that a lot of his time is unaccounted for.

All those blanks gave generous scope for my imagination with this new book – even room for new characters and a brand new supplemental storyline, all without changing what Jane Austen wrote in her masterpiece.

The biggest single addition I made to the story is something Jane Austen never alluded to; it is a previously unknown character by the name of Amelia Lambright. But it seems perfectly reasonable to me that she (or someone very like her) existed. After all, Darcy would have known plenty of women before he met Elizabeth. And he was at the point in his life when he would likely have begun contemplating marriage. So according to my theory, his mind very naturally turned to Amelia: the daughter of an old family friend, and an entirely suitable choice. All his interactions with her fit neatly into the blanks in the P&P record.

As for a more classic example of a “missing scene,” how about the business at Ramsgate, which was a very big deal in Darcy’s life. Austen gives us (through Darcy’s letter) the bare bones, but she doesn’t show us the whole picture. For example, how did Georgiana get permission from her over-protective brother to travel there with Mrs. Younge in the first place? Then what prompted Darcy to follow, just in time to break up Wickham’s dastardly plan? And what about the emotional fallout afterward? How badly did Georgiana suffer, and how did Darcy deal with it?

Now, Darcy gets the chance to tell us …In His Own Words. There’s also Bingley deciding to take Netherfield, Darcy’s efforts to separate him from Jane, and later his discovering of Lydia and Wickham’s London hideaway, and his showdown with Lady Catherine de Bourgh – “it taught me to hope.” These are all “missing” from the original novel, along with several critical letters.

Even a small omission – like a bit of missing dialogue – makes me itch to fill in what belongs there, as with the two proposal scenes. In the first one, Darcy famously declares to Elizabeth, “In vain have I struggled. It will not do. My feelings will not be repressed. You must allow me to tell you how ardently I admire and love you.” Great beginning! But the rest of what he says in his proposal – the part where it all goes so horribly wrong – is only described, not written out. In the second proposal, it’s Elizabeth’s words that are missing. JA only tells us she immediately, though not very fluently, gave him to understand, that her sentiments had undergone so material a change… as to make her receive with gratitude and pleasure, his present assurances. I enjoyed adding those missing words of dialogue too!

Perhaps the thing P&P fans miss most, though, is more of what happens after the wedding. For Jane Austen to have written a wedding-night scene would have been unthinkable, of course. But now I’m able to fill in at least a portion of that blank as well, in a very PG fashion. (Then for much more of their married life, read my sequel The Darcys of Pemberley).

I said before that Amelia was the biggest thing I added to the P&P story with this book. But when I reconsider, that’s not really true. The biggest previously missing element I added has to be Darcy’s thoughts. In this novel, he tells his own story. And so we see everything through his eyes – through his perspective and particular frame of reference, which as you know, is vastly different from Elizabeth’s, especially in the beginning. To understand a complex love story, both parties need to be heard from! Don’t you agree?

I hope you will enjoy reading Fitzwilliam Darcy in His Own Words as it expands the Pride and Prejudice saga, adding textured layers while preserving the original story we all love so much! 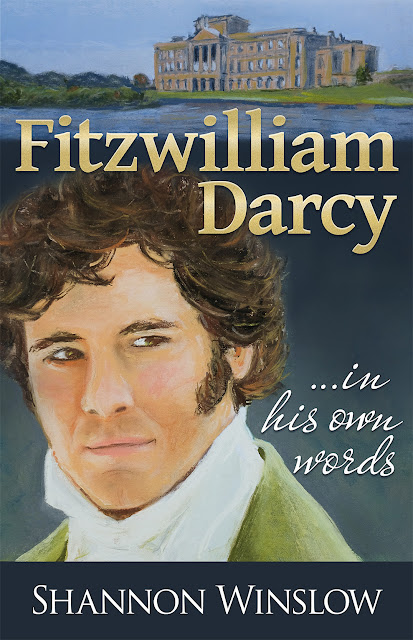 Fitzwilliam Darcy ...in His Own Words
by Shannon Winslow
What was Mr. Darcy’s life like before he met Elizabeth Bennet? – before he stepped onto the Pride and Prejudice stage at the Meryton assembly? More importantly, where is he and what is he doing all the time he’s absent from the page thereafter? And what is his relationship to a woman named Amelia?
With Fitzwilliam Darcy, in His Own Words, the iconic literary hero finally tells his own story, from the traumas of his early life to the consummation of his love for Elizabeth and everything in between.
This is not a variation but a supplement to the original story, chronicled in Darcy’s point of view – a behind-the-scenes look at the things Jane Austen didn’t tell us. As it happens, Darcy’s journey was more tortuous than she let on, his happy ending with Elizabeth in jeopardy at every turn in his struggle between duty and his heart’s desire, between the suitable lady he has promised to marry and the woman he can’t stop thinking about.
Buy: Amazon
Add to Goodreads.
FTC Disclaimer: Link to Amazon. I am an Amazon Associate. Should you purchase a copy of the book through the link provided, I will receive a small commission. Thanks!
Connect with Shannon Winslow
Twitter • Facebook • Website
Congratulations, Shannon, on the release of your new book, Fitzwilliam Darcy, in His Own Words! And thank you so much for visiting us here at So Little Time...!
So, friends, let us know what you think! Have you ever wondered what Darcy was doing or thinking while not on the pages of Pride and Prejudice?
Posted by Candy @ So little time... at 12:30 AM