Hello, my friends! It's my pleasure to have Alice McVeigh, author of Susan: A Jane Austen Prequel, on the blog today! She has brought with her a fun guest post and quiz! Plus, she giving away a signed paperback! Details at the bottom of the page.

It is a truth universally acknowledged… that some lines of Austen are quoted far more often than others.

Yes, the opening of Pride and Prejudice is wittily, slyly, and exquisitely turned. Correct, it surfaces—as it deserves to—in every list of “great novel openings”. But there are lots of tiny flowerings of Jane Austen’s particular genius that deserve more attention than they receive. A few of these just might even give us insights into Austen herself.

It is my modest intention to explore a handful of these.

First, a few impertinences from her letters (mostly to her sister Cassandra):

We are to have a tiny party here tonight. I hate tiny parties, they force one into constant exertion.

Another stupid party last night; perhaps if larger they might be less intolerable, but here there were only just enough to make one card-table, with six people to look on and talk nonsense to each other.

I do not want people to be very agreeable, as it saves me the trouble of liking them a great deal.

These excerpts from her letters suggest that Austen could find society a bore—at least her local society of the time. But it could also suggest that she could get simply exasperated at being torn from her gleeful creative escape, upstairs at her desk.

Imagine, for example, Jane Austen attempting to express the maelstrom of emotions Anne Elliott experiences in that Bath hotel – she was speaking feelingly to Captain Harville while Captain Wentworth – unbeknownst to her – was inscribing that incandescent love letter to her in another part of that same room.

And then imagine her being summoned to attend, as a duty, some heavy local event, where she would be obliged to endure ‘everyday remarks, dull repetitions, old news and heavy jokes.’ (This quote from Emma, of course.)

But while sympathizing with Austen’s annoyance, I somehow can’t imagine her sulking in a corner of the squire’s house during the occasion. No, I’m sure that—especially if the party really was “tiny—she would have impelled herself to the “constant exertion” she mentioned, if only to prevent herself from utter boredom. She would have injected some hint of spice into the proceedings, I’m convinced, however keen she might have felt to get back to grips with Persuasion’s culminating scene. I’m sure that the other five people (“looking on at the card table while talking nonsense”) would have been very much duller without her.

As for the comment about “not wanting to like people a great deal” – that seems rather more mysterious. It could be anything from a throwaway line to amuse her sister to a genuine hope that no man at some upcoming event might be capable of arousing her admiration—lest she suffer rejection or even pain. It’s hard not to suspect that someone so deep and so feeling must have suffered both at various times.

However, most of the little gems scattered amongst her correspondence reflect both philosophy and that irresistible humour:

“Next week I shall begin my operations on my hat, on which you know my principal hopes of happiness depend.”

“Expect a most agreeable letter; for not being overburdened with subject (having nothing at all to say) I shall have no check to my Genius from beginning to end.”

“Single women have a dreadful propensity for being poor, which is one very strong argument in favour of matrimony.”

There is not, in the letters, very much about the writings, but what exists is delightful:

“I could not sit seriously down to write a serious romance under any other motive than to save my life; and if it were indispensable for me to keep it up and never relax into laughing at myself or other people, I am sure I should be hung before I had finished the first chapter. No, I must keep to my own style and go on in my own way; and though I may never succeed again in that, I am convinced that I should totally fail in any other.”

And now for the quiz.

How well do YOU know Jane Austen?

P&P by heart, the rest not at all?

Or have you got every phrase of The Watsons at your fingertips? (Kudos!)

Below you will find ten quotes, of which SIX are Jane Austen’s (from the major works) and FOUR are from my brand-new Susan: A Jane Austen Prequel instead. (I borrowed characters from both Emma and P&P for Susan.)

1)  Nothing is more deceitful than the appearance of humility. It is often only carelessness of opinion, and sometimes an indirect boast.

2)  “Her ladyship is not always as discerning as, with her air of command, one might suppose her to be. That situation of Darcy’s – she ought never to have interfered. Had she been content to be still and be silent, nothing would have happened, and Darcy’s infatuation would simply have passed.”

3)  Where youth and diffidence are united, it requires uncommon steadiness of reason to resist the attraction of being called the most charming girl in the world.

4)  Lady Catherine said, ‘In my opinion, every gentlewoman should be able to ride, to embroider, and to play tolerably on the pianoforte. To play too well on the pianoforte, however, might be considered vulgar.’

5)  How quick come the reasons for approving what we like!

6)  ‘I have had such good luck in getting my own children off my hands, that she will think me a very fit person to have the charge of you; and if I don’t get one of you at least well married before I have done with you, it shall not be my fault.”

7)  ‘Your nerves, at least, do not appear to have been shattered,’ said Mr Churchill softly, at her elbow.

8)  “I have nothing to say against him; he is a most interesting young man; and if he had the fortune he ought to have, I should think you could not do better. But as it is, you must not let your fancy run away with you. You have sense, and we all expect you to use it.”

9)  “Love might be delightful, but it is not for us. We cannot afford it. For neither of us is in the least likely to have our wedding settlements become the matter of newspaper announcements, or of earnest disputes between City lawyers. Instead, it is up to us—to our own wits—to avoid our likeliest fate, which is, either to marry someone we dislike, from motives of prudence—or never to marry at all.”

10)  “One half of the world cannot understand the pleasures of the other.”

3)  From Northanger Abbey (regarding Catherine Morland)

4)  From my Susan, A Jane Austen Prequel

6)  From Sense and Sensibility. Mrs Jennings is delighted to have secured Elinor and Marianne to accompany her to town.

7)  From my Susan, A Jane Austen Prequel

9)  Susan advises her cousin Alicia in my Susan, A Jane Austen Prequel

10)  From Austen’s immortal Emma. Emma is speaking to her father, Mr Woodhouse.

Happy reading, from your fellow Janeite, 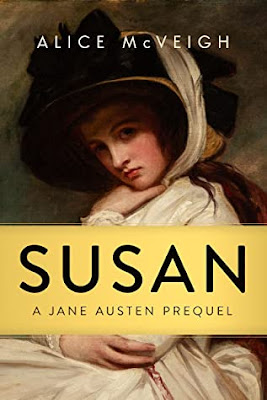 Susan
A Jane Austen Prequel
by Alice McVeigh
“She possesses an uncommon union of symmetry, brilliancy, and grace. One is apt to expect that an impudent address will naturally attend an impudent mind – but her countenance is absolutely sweet. I am sorry it is so, for what is this but deceit?" (from Lady Susan, by Jane Austen)
Sixteen-year-old Susan Smithson – pretty but poor, clever but capricious – has just been expelled from a school for young ladies in London.
At the mansion of the formidable Lady Catherine de Bourgh, she attracts a raffish young nobleman. But at the first hint of scandal, her guardian dispatches her to her uncle Collins’ rectory in Kent, where her sensible cousin Alicia lives and “where nothing ever happens.”
Here Susan inspires the local squire to put on a play, with consequences no one could possibly have foreseen. What with the unexpected arrival of Frank Churchill, Alicia’s falling in love and a shocking elopement, rural Kent will surely never seem quite so safe again.
AUTHOR'S NOTE: This book is a prequel to Jane Austen's Lady Susan, in which a beautiful and manipulative young widow of 35 descends on her sister-in-law to escape the wrath of her lover’s wife, and almost succeeds in marrying the young heir of the household.
The idea first occurred when I began to wonder what Lady Susan might have been like when she was only sixteen.
I have set it five years after Pride and Prejudice and have – possibly rashly! – dared to ‘borrow’ several characters from P&P, including Lady Catherine and Mr Collins, plus Frank Churchill from Emma, which I hope is forgivable!
I was frankly pretty overwhelmed to have received a rating of 10/10 stars for this book in Publisher's Weekly's BookLife Award competition.
It has also been VERY kindly "recommended" by the US Review of Books, Indies Today and by all three editorial reviewers for Readers Favorite (all five stars). Susan will be released on June 30th. Grateful thanks to all of you here who have read it as an ARC, in advance of publication.
AM
Buy: Amazon US  (paid link) • Amazon UK
Add to Goodreads.
FTC Disclaimer: Link to Amazon US. I am an Amazon Associate. Should you purchase a copy of the book through the link provided, I will receive a small commission. Thanks!
About the Author
Alice McVeigh, a Londoner by way of Seoul, Bangkok, Singapore, Myanmar, and McLean, VA, has also been published by Orion/Hachette, in contemporary fiction. Having trained as a professional cellist, she spent fifteen years touring the world with the Royal Philharmonic Orchestra. She has been a life member of the UK’s Jane Austen Society since she was 21, and knows most of her works by heart. 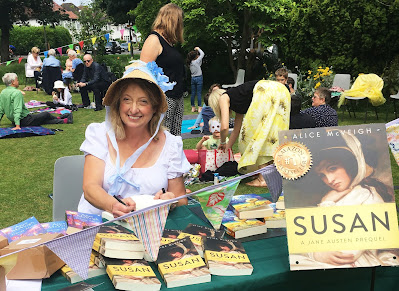 Connect with Alice McVeigh
Website • Facebook • Instagram • Twitter • Goodreads
* * * GIVEAWAY * * *
It's giveaway time! Alice is generously giving away a signed paperback of Susan: A Jane Austen Prequel, to one of my lucky readers! This giveaway is open Internationally! Woot! Thank you, Alice!
Enter through the Rafflecopter below!
And be sure to leave a comment below! 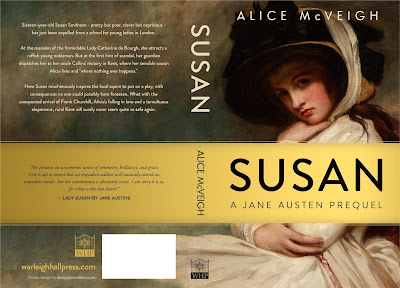 a Rafflecopter giveaway
Many thanks to Alice McVeigh for joining us today! I enjoyed the quotes and quiz! Also, for her generous giveaway!
I hope you enjoyed this post! How did you do on the quiz? Do you have a favorite Austen quote? Let us know!
Posted by Candy @ So little time... at 12:30 AM