Happy Tuesday, my friends! It's my pleasure to be part of the A Long Way from Clare Blog Tour! Robert W. Smith has stopped by to share an excerpt from his new book! Plus, Meryton Press is giving away an eCopy of the book. Details are at the bottom of this post. 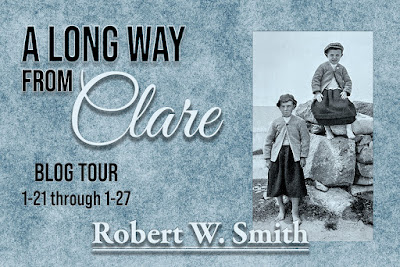 First of all, thank you to Candy for hosting me. If you like an off-beat love story sprinkled with a mystery and wrapped in history with a dash of social commentary, this book might be for you. I picked an excerpt that gives you a window into my Conor Dolan. He’s a bright, young immigrant lawyer, a bit socially inept with limited experience in matters of the heart, the kind who would flash you puppy eyes in a bar but freeze up when you smile back. Conor’s visit to Chicago has morphed into a mystery he’s determined to unravel. The lawyer has allied himself with an alluring, middle-aged widow named Rebecca Fletcher and Father Brendan White, a politically savvy Catholic priest. Rebecca is “tutoring” the young man in the ways of life and love and Father Brendan guides him through the labyrinth that is Chicago politics. Maureen Brogan is young, Irish firebrand of a single mother, herself involved up to her ears in Conor’s mystery. Both were Father Brendan’s unescorted guests for dinner at the rectory earlier tonight and Conor has been tasked by Brendan to escort young Maureen home safely. The sometimes thick-headed young man is trying to dissect the evening’s dynamics…
Excerpt
Late fall, 1903, Chicago

On the trolley back south, Conor wondered whether Maureen’s presence at the dinner, the seating arrangements, even this trolley ride home were coincidence or some sort of sinister plot by his devious friend, Father Brendan. He never thought of his relationship with Maureen Brogan as a courtship, nor had he harbored any desire to court the girl. Still, his initial opinion of Maureen had been unfair, unkind even. There was substance in Maureen Brogan, intelligence to spare, and the kind of independence he so much admired in Rebecca Fletcher. And make no mistake, he thought, Maureen was an attractive woman. There was no denying the fact.

Out of nowhere, Maureen asked from the seat beside him, “So what did ye think of Father Brendan’s matchmaking then?”

He laughed. “Yes, I noticed. It was a little embarrassing, I suppose, you and I being more or less business acquaintances—I mean in the matter of my brother.”

She kept her eyes trained straight ahead. “Of course, in the matter of yeer brother…and all.”

His attempt at humor flopped. “’Tis a myth, if ye ask me. Father Brendan is a complicated pairson. He feels guilty about being a priest, t’inks he has it too easy. He doesn’t want people to see him as marally superior, so he makes up sins about himself, sins he never committed. It makes him feel more like the rest of us poor fools. Besides, you already have a garlfriend, and, if you ask me, she’s too old far ye, no matter how nice she is. I t’ink the garlfriend is in his fookin’ head.”

Conor knew better, but Maureen Brogan had effectively shut the lawyer’s mouth. Brendan must have told her about Rebecca, but who told Brendan? Outside Maureen’s flat, he stopped at the exterior door of the house and tipped his trademark homburg, “Goodnight, Maureen. It was a very pleasant day.”

Still holding little Patrick’s hand in hers, she took a step toward Conor, raised herself up on dainty tiptoes and kissed him gently on the lips. “Goodnight, Conor Dolan, and t’ank ye for a wonderful day.”

On the streetcar ride east, it occurred to him how complicated his life had become in the last two months. He had learned much about women, about sex, even about the basest proclivities of human nature. And that was only his personal life. The more he learned, the more confused he became. He recalled a paraphrased quote from Oscar Wilde to the effect that, “Experience is the name men give to their biggest mistakes.”

He hopped off the streetcar at LaSalle and caught a southbound transfer with no wait. The car was empty but for a shabbily dressed woman with a young boy playing a harmonica. He sat facing them in the open car, and he was struck by the woman’s uncanny resemblance to his own mother. For the first time since his arrival, Conor thought consciously about his mother, about Ireland, the little white cottage, and the road down to the bog. He remembered the music that filled the family’s evenings as the turf fire cast its shadows along the stone wall. In that moment, he could almost smell the fire and the song of the kettle on the hearthstone.

Pa was proud of the stone house he and his brother had built; the people in their village, most of whom lived in cottages, lauded him for his craftsmanship.

On rare occasions these days, Conor would still dream about his little dog and the incident at the Cliffs of Moher, but that was more a nightmare than a memory, banished to the whim of his unconsciousness.

He passed Murph’s place on the walk home but fought the urge to stop for a nightcap. He would need his rest for the coming days. 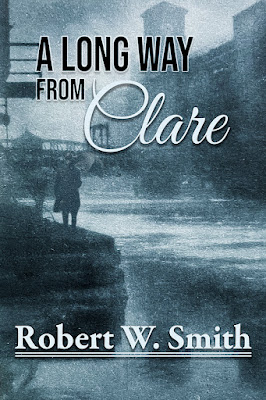 A Long Way from Clare
by Robert W. Smith
Blurb: Romance, Kidnapping, and Murder…
Will a young Irish lawyer unravel the secrets or die trying?
Conor Dolan, a young Irishman, travels to Chicago in 1903 to visit his older brother; instead, he finds a mystery. His journey sparks a quest to peel away secrets and rediscover a dead sibling he idolized but never really knew as he strives to learn the true meaning of brotherhood.
His search reveals an Irish Republican plot to assassinate a visiting British royal. In the process, he is drawn into an alliance with two women: a mesmerizing Jewish widow and a struggling young Irishwoman. Each teaches Conor existential truths of life and love in her own way.
But the brother he finds may not be the brother he remembers. A Long Way from Clare is a story of Chicago's early twentieth century immigrants and one man’s struggle with both bigotry and justice in an unforgiving city where no good deed goes unpunished.
Will Conor find the answers he desperately craves? Or will this trip punch a one-way ticket?
Buy: Amazon US (paid link) • Amazon Universal Link
Add to Goodreads
FTC Disclaimer: Link to Amazon US. I am an Amazon Associate. I will receive a small commission if you purchase a book through the link provided. Thanks!
About the Author 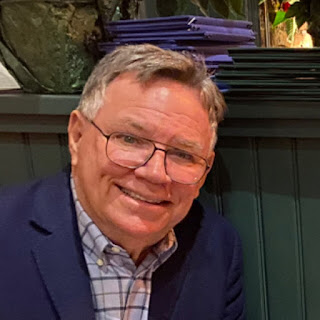 Bob was raised in Chicago, enlisting in the Air Force at age
eighteen during the Vietnam War. Following a year of language training at Syracuse University, he served four years as a Russian Linguist in Security Service Command, a branch of the NSA. He attended DePaul University and The John Marshall Law School in Chicago on the G.I. Bill while working as a Chicago Transit Authority Police Officer. Thirty-odd years as a criminal defense lawyer in Chicago followed. His first book was Immoral Authority (Echelon Press, 2002) followed by Catch a Falling Lawyer (New Leaf Books, 2005) and The Sakhalin Collection (New Leaf Books, 2007, hardcover). In February of 2022, Between the Lines Publishing released Bob’s newest novel, Running with Cannibals, a historical/military thriller based on actual events of the Philippine-American War.
Connect with Robert W. Smith
Facebook Author Page • Amazon Author Page • Goodreads • Website
Blog Tour Schedule
January 21 My Vices and Weaknesses
January 23 Celticlady's Reviews
January 24 So Little time…  You're here!
January 25 Meryton Press Blog
January 26 From Pemberley to Milton
January 27 Elza Reads 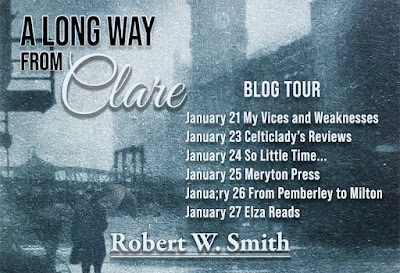 * * * GIVEAWAY * * *
Meryton Press will be giving away one eBook for each stop on the Blog Tour, for a total of six eBooks! For my stop, please leave a comment with a way to contact you, or check back here, where I will announce the winner. 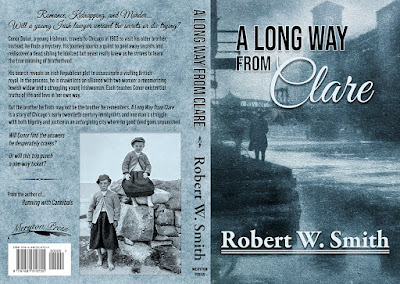 Many thanks to Robert W. Smith for stopping by and sharing an excerpt with us! Congratulations on the release of A Long Way from Clare.
Thanks to Meryton Press for the giveaway! And a big thanks to Janet Taylor @ More Agreeably Engaged for organizing and including me in this blog tour!
Posted by Candy @ So little time... at 11:30 PM