Pride and Prejudice: A Royal Disposition By Amy Cecil 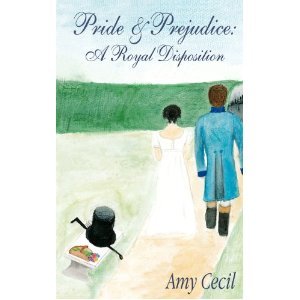 What if Elizabeth listens to Lady Catherine’s tirade about how Elizabeth’s low rank and connections would disgrace the Darcy name, and they would be shunned by family and friends? Would Elizabeth break their engagement to protect Darcy and Georgiana from disgrace?

That is what happen’s in Pride and Prejudice: A Royal Disposition. Early on in the story, we learn that Elizabeth is not a Bennet, but the daughter of Prince Fredrick, the Duke of York. She is of royalty and out ranks Darcy.  Elizabeth doesn't know this, and she thinks she is the daughter of Mr. Bennet’s deceased sister. Mr. Bennet has kept this secret even from his wife.

Elizabeth, fearing that Darcy will come to resent her, believes she is doing the right thing by breaking their engagement. When Darcy learns the secret of Elizabeth’s true identity, he patiently waits to reveal the truth for the right time. The question is, will the truth bring them back together or will it drive them further apart?

I liked how the first time Elizabeth sees Darcy at the Meryton Assembly she is drawn to him. She is able to discern that underneath that proud, disagreeable surface is a strong and honorable man. She was also able to see right through Wickham’s lies.

I liked the Duke, and his story with Lady Sophia, Elizabeth’s biological mother. Lady Sophia was the Duke’s true love, but to build an alliance with Prussia, King George commanded that the Duke marry his cousin Charlotte. That was a decision the Duke would regret the rest of his life.

The storyline was enjoyable. I liked Elizabeth being royalty, and the obstacles that Darcy and Elizabeth face, but, unfortunately, I felt the story lacked emotion, and obstacles that Elizabeth and Darcy faced were removed too easily. I would have like to see Mr. Bennet or the Duke get mad at Darcy for interfering. Everything just went along at an even keel.

I did enjoy the story. There are some interesting twists and turns. I look forward to reading Amy Cecil’s next novel, Relentless Considerations -- A Tale of Pride and Prejudice.

I won my copy of this book from Darcyholic Diversions.