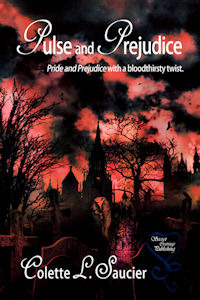 When the haughty and wealthy Fitzwilliam Darcy arrives in the rural county of Hertfordshire, he finds he cannot control his attraction to Elizabeth Bennet – a horrifying thought because, as she is too far below his social standing to ignite his heart, he fears she must appeal to the dark impulses he struggles to suppress.

Set against the vivid backdrop of historical Regency England, this adaptation of Pride and Prejudice follows the cursed Mr. Darcy as he endeavours to overcome both his love and his bloodlust for Miss Elizabeth Bennet. Although Pulse and Prejudice adheres to the original plot and style of the Jane Austen classic, it is not a “mash-up” but an imaginative, thrilling variation told primarily from Darcy’s point of view as he descends into the seedier side of London and introduces Elizabeth to a world of passion and the paranormal she never knew existed.


Halloween is not my favorite holiday, but I needed to read a paranormal for the Jane Austen Spinoff Challenge, and I thought this would be the perfect time of the year to do that! And Wow! Colette Saucier’s Pulse and Prejudice was just the right book! This is the second book of Saucier’s that I’ve read, and I’ve loved both of them! You can read my review for that book, All My Tomorrows, soon on Indie Jane.

Pulse and Prejudice is not only a paranormal, but it’s also a Pride and Prejudice retelling. It is told mostly from Darcy’s point-of-view in the beginning but does switch back and forth between Darcy and Elizabeth towards the end.

In this story, Mr. Darcy is a vampire, but he is ashamed of his affliction. I love that he is still a good and honorable man. (I’m not so fond of a dark/evil Darcy.) He tries to resist his need to feed on human blood and feeds on animal blood instead. Because of his curse, he vows never to marry, but when he meets Elizabeth he is drawn to her in a way he has never experienced before. At first, he confuses his feelings for her as an intense bloodlust and tries to sedate himself with more blood, even human blood, but that can’t fill his desire for her.

One thing I really liked about the story is how Saucier slowly gave us information about Darcy’s affliction, for example, we are told much later in the story about when Darcy became a vampire. I also liked how Darcy would contemplate eternity, with all the pain he has suffered in his twenty-eight years, to him eternity is daunting.

Although we are told when and why, we are not told how Darcy became a vampire (unless I missed something, which is entirely possible). Apparently it is not from a vampire bite, because we see a couple of people bitten that don’t become cursed. Maybe we will learn more about that in the sequel!

I liked finding out why Mr. Gardiner is more of a gentleman, and a person of fashion, when his two sisters are so vulgar, and how Jane and Elizabeth are genteel compared to their younger sisters.

Pulse and Prejudice held me mesmerized! I enjoy Saucier’s writing, and I’m looking forward to the sequel to Pulse and Prejudice, Dearest, Bloodiest Elizabeth, where Darcy and Elizabeth will be traveling to New Orleans to look for Wickham! Sounds exciting!

I would give this a mature rating for some sexual scenes.

I won my copy of Pulse and Prejudice on Indie Jane.

Colette Saucier has been writing poems, short stories, and novellas since grade school and experienced early success in having several of her poems published in her junior high school newspaper. Her interest in literature led her to marry her college English professor, but eventually a love of history encouraged her to trade up to a British historian. Technical writing has dominated Colette’s career for the past twenty years; but finding little room for creativity in that genre, she has spent the last several years traveling to Europe and Britain, researching Regency England and vampire lore and literature, to complete her first full-length novel, Pulse and Prejudice. She is currently researching and writing a sequel to Pulse and Prejudice set in Antebellum New Orleans.

Colette is also the author of the new release All My Tomorrows, a modern tale of Pride & Prejudice for the new millennium.

Colette lives in South Louisiana with her historian husband and their two dogs.

This completes my paranormal category of the Jane Austen Spinoffs 2012 Reading Challenge.

>>>If you would like to listen to an excerpt of Pulse and Prejudice, head over to Leatherbound Reviews and watch Jakki's vlog.<<<