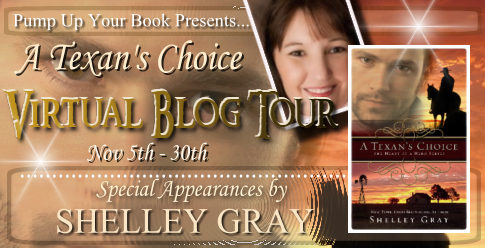 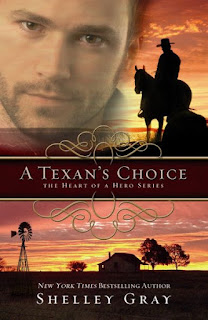 About A Texan's Choice

When notorious outlaw Scout Proffitt wins a rundown ranch in west Texas, he expects to find the home he’s never had. Instead, he finds a run-down shack, a barn in dire straits…and a lovely woman who’s in no hurry to give up her ranch.
When Scout discovers that Rosemarie has nowhere else to go, he   reluctantly allows her to stay with him for two weeks until she can find another home. But soon the locals get involved and insist they marry.
Determined to do at least one thing right in his life, he marries Rose. Then people from his past come back and give him an offer he can’t refuse. If things go well, he can make a fresh start. If not, he’ll be even worse off than before.
Which was something he never thought possible…

Next to Regency, Historical Romance stories set in the American West are one of my favorite to read. I was very happy to get a chance to read A Texan’s Choice. I was intrigued to see how Gray would turn a gunslinger into a hero, and I was delighted with the results!

Rosemarie has always felt like an outsider in her own home. Her mother has never forgiven her for the death of her little brother. It was an accident, but that doesn’t matter. Now, her father was dead, and her mother was leaving her to go to live with her sister and brother-in-law, leaving her at the mercy of a killer.

Scout Proffit was a gunfighter who had run with the Walton Gang. Men feared him. He had come to claim the ranch he had won in a card game a couple of months back. What he found when he got there was a run down ranch and Rosemarie. With no place to go, Rosemarie asks if she can stay on at the ranch until she can find another place to go. Reluctantly, Scout agrees. When the town folks find out they are alone on the ranch, they insist that Scout and Rosemarie marry.

Deep down Scout is a decent man. He didn’t start out wanting to be a killer, but out of desperation he had become one, and he found he was good at it - real good. He was surprised how easy it was to shut off his feelings, and walk away from those he killed. When he realizes Rosemarie’s family is abandoning her, Scout feels a strong need to protect her. I love Scout and how he softens up to Rosemarie.

Another man who also ran with the Walton Gang is Russell Champion. Russell was tired of an outlaw’s life. He wanted to be able to walk the streets without worrying about the law coming after him. Then there is Miles Grant, owner of Circle Z ranch, he too struggled with low self-esteem. He worked hard to earn the trust of his hands at the ranch, but he still felt as if he needed to prove himself worthy of that trust and have their respect. When trouble comes to call, can these three men come together and break free of their pasts?

I liked Scout and Rosemarie's story. I love that whole damsel in distress and the strong, handsome,...gunslinger, in this case, who comes along and saves the day! I also enjoyed Mile's story. I really liked his feisty housekeeper, Annebeth. I liked how she bosses Miles around and always knows what's going on around town and at the ranch.

Even though, this is the third book of the series, and I have not read the first two, I didn’t feel as if I were missing anything. So, I would say this story can stand alone. But now I want to read A Texan’s Promise and A Texan’s Honor!

I received a copy of this book for my honest review. 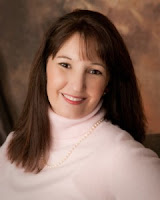 Shelley Gray’s first Amish novel, Hidden, was nominated for the Inspirational Readers Choice award. Her bookSimple Gifts won the Reviewers Choice Award. Shelley’s novel, The Protector, recently made the New York Timesbestseller list.  Her novels have won the prestigious HOLT Medallion Award, the Reviewers Choice Award, and been highlighted in the Philadelphia Enquirer, Time Magazine, and USA Today. She’s also been interviewed on NPR as well as numerous regional radio stations. In addition, her novels have made both the USA Today and New York Times Bestsellers lists.
Before writing romances, Shelley lived in Texas and Colorado, where she taught school and earned both her bachelor’s degree in English literature and elementary education and later obtained her master’s degrees in educational administration. She now lives in southern Ohio and writes full time.
Her latest book is the Christian historical fiction, A Texan’s Choice.
You can visit Shelley’s website at www.shelleyshepardgray.com.
Connect with Shelley: Facebook | Goodreads
Purchase A Texan’s Choice: Amazon | Barnes & Noble |  ChristianBook.com | Abingdon Press