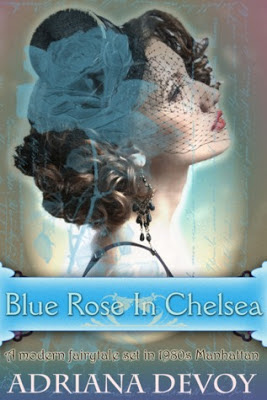 Wow! I loved this story! Blue Rose in Chelsea was so much more than I thought it was going to be! From the magical connection between Evan and Haley, and the deep friendships that are everlasting, to brotherly love.

The story begins September of 1988. Haley and her brother Dylan are on their way to a friend’s house when Haley spots a blue rose that she believes is a sign of a miracle to come. Soon after, she meets Evan Candelier.

Haley wants to experience life, not just read about it in books, so she drops out of Princeton. Her plan is to one day write “The Great American Novel”. Her brother, Dylan, who she spends a lot of time with, pesters her to get a job. With her genius IQ, he can’t believe she dropped out of college.

Evan was formerly a dancer with the American Ballet Theatre and is now trying to break into acting. He is slow to reveal himself to people, and it takes a while for Haley to get to know him, but the connection between them is palpable. There were so many times they would get close then he would pull away and leave. Haley was good at sabotaging the relationship too, by saying something totally opposite of what she felt.

I love that Dylan and Haley spend so much time together! She goes out with him and his friends, and he watches over her, but at times he can be a little overbearing. Dylan recognizes the strong energy between Haley and Evan, but he doesn’t understand it. He thinks Evan will only hurt Haley, and tries to keep them apart. I like that he is protective of Haley. What can I say? ...I just love Dylan! He’s smart, a hard worker, knows what he wants and goes after it. He has a strong presence that makes people respect him.

Another character I loved was Sinclair! He is a costume designer and makes amazing outfits for Haley to wear. Haley tells him everything that is going on with her and Evan. He gives her advice and is always there for her. I love that he quotes the Red Queen from Alice Through the Looking Glass. It always fits in to the conversation!

There is so much about this story I liked. I love the fashion of the 80s, and the sights and culture of the city. I love that Careen (Haley’s cousin) calls her husband Mr. Palmer, from Sense and Sensibility “due to his affinity for dry and amusing commentary", and that Haley is a Jane Austen fan! I found myself laughing out loud often as I was reading Blue Rose in Chelsea and getting choked up a few times too. It was more than a romance, and I really liked the relationship between Dylan and Haley and the deep friendship she had with Sinclair. From the beginning of the story, I was hooked!

I would highly recommend this modern fairytale set in Manhattan.

I received a copy of this book from the author for my honest review.

Adriana Devoy is the author of four novels, including Blue Rose in Chelsea (2004), a Cinderella story set in 1980s Manhattan, and The Pollen Path (1996), which follows the lives and loves of three young women in a seaside town. Forthcoming are The Theory of Faeries (2010), and the middle grade novel, In the Garden of Goodwill.

Adriana credits her love of books to her mother, who took her to the Brooklyn Public Library as a little girl and encouraged her to roam the stacks to choose her own stories. Adriana studied English literature, classical ballet, and classical piano. She also enjoys yoga, organic gardening, reading mystical literature, and rescuing cats.