Book Tour/Review: Out of the Blue by Lisa Maliga 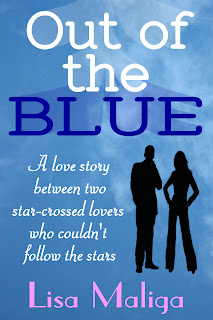 Sylvia Gardner is a naïve cashier who lives with her mother in Richport, Illinois. Upset with being dumped by her first boyfriend; she later falls in love with an English actor after watching him on a TV show. For two years she researches Alexander Thorpe's life and career, saving her money to travel to his Cotswolds village, intent on meeting him. Staying in the village's only hotel, she gets room and board in exchange for working at the Windrush Arms Hotel. Complications ensue when the drunken hotelier, Harry Livingstone, takes a fancy to Sylvia. As in her fantasies, Sylvia and Alexander get together—but with unexpected results.

Sylvia Gardner leads a pretty mundane life. At 19, after breaking up with her boyfriend, she becomes infatuated with a British actor, Alexander Thorpe. As a result, Sylvia learns everything she can about him. She knows that he lives in a little village in England, and decides to save her money so she can meet him. Two years later, in 1981, Sylvia leaves her home in Illinois, boards a plane, and goes to England to find Alex.

I found the story to be a little melancholy for me. Sylvia is lost. She has dropped out of college and is working in a library. She doesn’t really know what she wants to do with her life. She sees some of the kids she went to school with, from the jock, with a promising career ahead of him, who loses it all when he goes to jail, to the good Christian girl, who has an unplanned pregnancy, all going down paths they didn’t intend to go down. She wants more from life than that, but what? One thing, she feels she needs to meet Alexander Thorpe. Some how that will make her life complete.

I liked the quaint little village Sylvia is at in England, and the interesting characters at Windrush Arms Hotel, but they all seemed to be struggling with their own misfortunes. One of them is Harry Livingstone, the hotel owner, his wife ran off years before, now he is overweight and is drunk most of the time. Then there is Phoebe, with a degree from Bristol University she Is much too qualified to be working as the barmaid. My favorite and the one person I would have liked to see more of was Peter O’Neill, I loved his Irish accent, and he was much more of Sylvia’s age. Still, he, like the other men in this story, only seem to have one thing on their minds - sex.

I admire that Sylvia wants more out of life and takes the initiative to do something about it, even if it’s to travel to England and meet the man of her dreams. It did kind of creeped me out with how much older Alex is than Sylvia. I'm not sure, but I think he is about 20 or 30 years older than Sylvia. I did get used to the age difference, and Alex grew on me. Sylvia and Alex do have some sort of psychic connection that draws them to one another.

I liked how at the end of the story Maliga jumped ahead many years ahead, to tell what some of the characters are doing at the exact time and day. A quick snap shot of what they are doing with their lives. From Sylvia’s old boyfriend in high school, to Phoebe, the girl who worked at the Windrush Arms Hotel when Sylvia was there.

Out of the Blue does have a happy ending, and I was so happy it did!

I received a copy of Out of the Blue for my honest review.


Lisa Maliga has been writing ever since she learned how to put crayon to paper back in kindergarten. Since then, she has learned to type and uses a laptop, citing it as way more convenient.
A fan of taking digital photos, you will find some of them on her website and in her nonfiction books. The masthead is a shot of the Pacific Ocean taken at sundown. Variations of this photo are seen on the covers of North of Sunset and her short story collection, South of Sunset. As an avid squirrel-watcher, all photos in Squirrels in the Hood were taken by the author.