Hey Everyone! I'm so pleased to have Lory Lilian visiting us! She has written and published a new Pride and Prejudice novella, The Perfect Match. 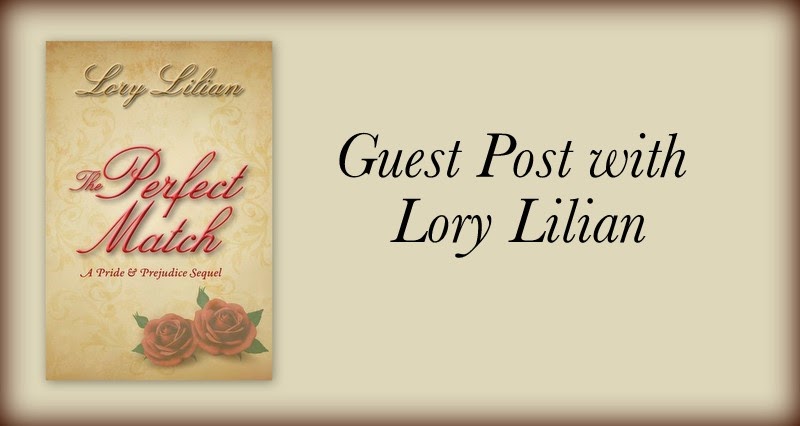 The Perfect Match : where did the short sequel came from?
About eight ago – when I used to be much more active on JAFF sites – I entered into a short story contest and wrote this ‘mini sequel’ called The Perfect Match. The original was focused on Jane and Charles’s marriage, and it started from the premise that, despite their happily ever after, neither of them changed much during the course of Pride and Prejudice events, and the problems that occurred from their lack of understanding of each other’s feelings might appear again.
This small story was long forgotten in a folder, until a couple of months ago when I discovered that it was still posted online on two sites.
At the same time, I was working very hard on a long and much more complex story, called “My Husband, Mr. Fitzwilliam Darcy.” As I used to do every time I work on a new story, I started re-reading (for the 100th time!) Pride and Prejudice. I need to have the characters fresh in my mind, especially when I write difficult scenes ☺. Anyway, once I got to the end of our beloved book, the inspiration struck me so intensely that I put the WIP aside and I started to write the sequel.
The last two pages of Pride and Prejudice offered so many clues, so many small details, such clear indications of the happily ever after that the sequel practically wrote itself. So I kept the old title, as I found it very adequate, but I changed almost everything else. The focus turned to Elizabeth and Darcy, although Jane and Charles still had their fair share of attention.  So in less than a month, the story was up online – a true record in quickness for me.
Since the genius Jane Austen indicated nothing about any problems, sufferings, major conflicts or other similar issues in ODC’s marriage, I thought it would be best to follow her description, with humble respect; after all, nobody knows Elizabeth and Darcy better than she does, right? ☺
The first major problem with this sequel was that the Regency rules completely ruined the idea of a ball for me; as a married couple, especially if they were hosting the ball, Elizabeth and Darcy were essentially not allowed to dance together. Darn! How can that be? Well, it was – and I had no other choice but to have Darcy and Bingley express my frustration by their words. ☺

The ballroom was decorated with floral arrangements and garlands, and Elizabeth required that some arrangements be redone three times as she was not satisfied with them. The servants only smiled and obeyed her orders; it was the first time the mistress had been displeased with anything, but her distress was easily understood.
In the library, Darcy, Mr. Bennet, Mr. Gardiner, Bingley and the colonel were discussing the day, savouring a glass of wine.
“So Darcy, may I ask Elizabeth to dance, since you are not allowed to dance with her?” asked the colonel in good humour. Oh, and Bingley—I will surely dance with Mrs. Bingley, too.”
“You know, I have always loathed this arrangement; who invented the rule that I cannot dance with my own wife as much as I like? Forgive me, but this is nonsense,” Bingley said, visibly distressed. “What is the point for a married couple to go to a ball if they are not allowed to dance together as they like? I would find it more logical that, since I am married, I do not have to count how many times I dance with my wife without raising gossip.”
“You may dance, Bingley; I allow you to do what you want,” Darcy said in conciliation.
“I beg to differ!” the colonel intervened. Mother instructed all of us for about two hours yesterday; you know that very well, Darcy. She specifically insisted that it is your job—and Bingley’s—to make certain everyone is feeling comfortable and entertained, that every lady has a dance partner, that everything is beyond reproach. She said she will be very upset if there are ladies without partners and if either of you do not comply with the duty of dancing.” The colonel could hardly restrain his laughter, joined by Mr. Gardiner, while Darcy rolled his eyes.

The second major challenge was to keep the story pretty “clean” – considerably less steamy than I would like to make it! ☺ It was so tempting to go on writing hot sex scenes – as the story itself was offering generous opportunities for that.  However, I succeed (at least I hope so) to convey the passion and sensuality without any explicit intimate scenes. It was like a small gift for all the readers who, during the years, complained about the mature content of my books.  However, the biggest surprise was that I got quite a lot of messages, asking why I did not “enhance” the story more.
(Well, well – this is quite a dilemma, right? How much hot sex is too little or too much? ;-). Anyway, the dilemma will be easily solved in my next story, where the intimacy will be a major issue and will be thoroughly explored. )
Returning to The Perfect Match – here is a short excerpt from it – hopefully enough to raise your curiously about my interpretation of Elizabeth and Darcy – the happiest couple in the world.

She stopped and looked at him, a smile lighting her face. “You know very well that I am teasing you now. I will be happy to receive my family’s visits and to have Georgiana with us, but I could never be bored with you, nor can I wish or need any other company but yours. How could I want anyone else around when I have the fortune of marrying the most worthy and most handsome gentleman? The most perfect husband, indeed.” She continued to tease him, though her loving eyes proved the seriousness of her words.
“I am not perfect, by no means. As I told you some time ago, I have faults enough. If I am a good husband to you, it is only because you made me this way; your love for me and my love for you made me a better man—you made me a better man, Elizabeth. I cannot forget that, in my mind and in my heart, I had been waiting for you for so many years, and when I found you, I almost lost you because I could not see how perfect you were for me.”
“Oh, but it is I who failed to see how perfect you were for me, William. Had I been wiser and less hasty in my judgments, I would have known better than to refuse you so harshly. I often think that we lost eight months; had I accepted your first proposal, we would have had eight more months of happiness.”

“Those eight months were not lost; they helped me to understand what true love and passion mean, to become the man I am now, the one who will do everything to give you a lifetime of happiness. So, my beloved Elizabeth, I can say without a doubt that you accepted me at the right moment.”

Oh, isn't that lovely! I'm looking forward to reading this! Not only has Lory Lilian incited us with a peak into The Perfect Match, she comes bearing gifts! See below. 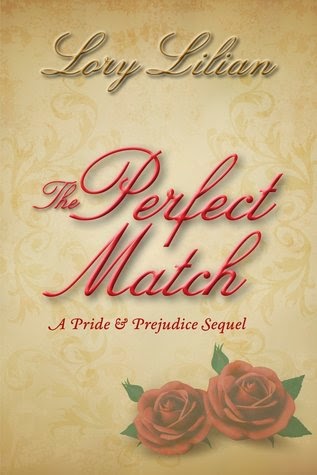 
“The Perfect Match” is a sequel to “Pride and Prejudice” that takes place a year after the events of Jane Austen’s novel. Her beloved characters are approaching their first wedding anniversary as the Darcys and Bingleys experience somewhat different marriages.
In addition, Elizabeth Darcy has the burden of organizing her first ball while she encounters the challenges of the high circles of Regency London, not to mention a mysterious “affliction” that has Mr. Darcy in a panic . . .
This novella is light and sensual, with several scenes suggested for a mature audience. There is no explicit sexual content.

Now's your chance to enter to win to copy! Lory Lilian is generously giving away one paperback and one e-copy of The Perfect Match! To win, just fill out the Rafflecopter below and leave a comment! Last day to enter is July 7th, 2014.

We'd love to hear from you! Please, leave a comment! Remember, to enter the giveaway, you MUST fill out the Rafflecopter above. If you need any help entering, email me! Just click on the icon at the top of the sidebar. Thanks!
Posted by Candy @ So little time... at 12:30 AM