Some Boys by Patty Blount ~ My Review 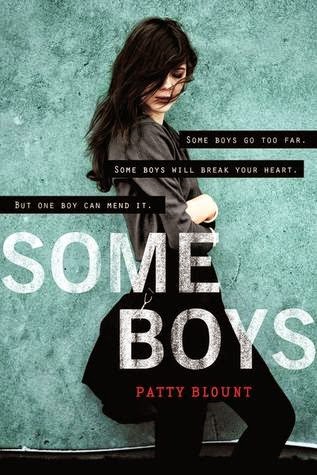 Some Boys by Patty Blount

Some boys go too far.
Some boys will break your heart.
But one boy can make you whole.

I really enjoyed this fast-paced, edgy young adult novel. It deals with the tough subject of rape; rape by a friend, and because you were friends, no one believes you. They think you asked for it, that you wanted it, that you said, “yes.” Everyone takes his side, because he's the golden boy, star of the lacrosse team ...he is Zac. Suddenly, you’re the school slut, and your so-called friends desert you. Grace finds herself in this position. Every day is a challenge to get through, but she's not going to let them beat her. I loved that about Grace: her strength.

When Grace gets in trouble at school, she receives detention and finds herself serving time with Zac’s best friend, Ian.

Ian has had a crush on Grace for a long time, but now, because of Zac, she is off limits, and the last thing he wants to do is spend time with her.  They are put to work while serving detention, cleaning lockers over spring break. Awkward at first, they agree not to talk about what happen with Zac, but as the week wears on and the more he gets to know Grace, Ian can’t help but find out the truth.

What I didn't like about this story, or found unbelievable, is a video posted on FB by the accused, Zac. The video is of Grace during the sexual encounter. She is intoxicated and incoherent (not fighting him) and this is his proof that it was consensual. I have a hard time believing a video like that would be allowed to stay up. And why wasn't Grace receiving any counseling other than one call to the Rape Crisis Hotline?

To me, the writing felt a little choppy in the beginning.  I think the reason for this is that the author slowly released the information of what happened at the time of the rape. As the picture became clearer the flow of the story was much better, and I was drawn in and couldn’t put it down. I practically read it straight through!

I love a story with a strong protagonist. Grace kept her head up, but there came a point when she wanted to give up, and I cried with Grace. I really love Ian, too, even though I wanted to shake some sense into him for blindly following Zac.  I also liked Ian’s father, who seems like a jerk at first, but says some nice things to Ian about Grace and gives him a few reasons to not think so highly of Zac.

Although this story deals with rape and the aftermath, the actual rape is not recalled, just the parts leading up to and after. But there is plenty of cussing, especially the use of GD and JC.

I truly enjoyed Some Boys!

FTC Disclaimer: Link to Amazon - I am an Amazon Associate. Should you purchase a copy of the book through the link provided, I will receive a small commission. Thanks!

Back in September, I was part of the Some Boys Blog Blitz. The book intrigued me so much, I bought my own copy! You can check out that post here and read an excerpt.