It's my great pleasure to be part of the Undeceived Blog Tour! Today, Karen Cox is here with an excerpt from her newest book, Undeceived! 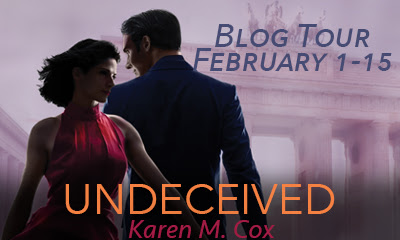 Hello, everyone! Thanks, Candy, for your invitation to post an excerpt on “So Little Time...”!

Undeceived takes place during the latter part of the Cold War. Roles for women in the U.S. continued to change during the 1970s and 1980s, but some embraced those changes more readily than others, as seen in this scene between Elizabeth Bennet and her mother, from Chapter 1:

It is a truth, universally acknowledged that, when a young woman decides to follow her late father’s career path, especially when her father died in pursuit of said career, her mother will be vehemently opposed to that plan of action.
“Lizzy, I don’t understand your thinking. You were at the top of your high school class. You left for college to be an UN interpreter. I thought you’d move to New York City, meet some dashing diplomat with a ton of money. You’d get married, quit your job, and give me a passel of smart, dashing grandchildren. Not be some kind of…career girl!”
“Mama.” Elizabeth Bennet rolled her eyes and gritted her teeth with the effort of being patient. “This is 1980. Women aren’t just entering the work force; they’re changing it. There was a Women’s Liberation Movement a few years back. Maybe you read about it? There was a song, ‘I Am Woman.’ It was on the radio, remember?”
“Pfft. That agency is a man’s world.”
“There is nothing mannish about the CIA. Lots of women work there.”
“If you have to be a career woman then, why can’t you work somewhere else? Anywhere else! That agency sent your father away, and I never saw him again. I was left all alone—with a baby girl to raise by myself.”

“Jim helped you a lot with that.”
“Your step-father isn’t the issue here! The CIA robbed me of my husband. Now they want to take my baby, too.”
“They didn’t rob you of him. My father was a hero. He died in the line of duty.”
“And you want to do the same?”
“Don’t be ridiculous. Of course I don’t want to die in the line of duty. I just…well, I would want him to be proud of me, but that isn’t all there is to it. I’ve wanted to join the CIA since I was fourteen and toured the headquarters building. Since I saw the stars on the Memorial Wall, and knew one of them stood for my father.”
Not for the first time, Elizabeth wished for her father, her real father. As a CIA man, she knew Tom Bennet would have supported her need to pursue this path. At least, she assumed he would have. She was only three years old when he died, and she remembered almost nothing of him. Until her mother married the affable, perpetual newspaper-reading Jim, the word “father” meant a handsome photograph in a frame—one that was put away in a drawer after Jim arrived on the scene.
“Besides,” Elizabeth went on, “I’m not working in clandestine operations. I’m applying for a linguistics position. It’s not the same thing as my father’s job. Not at all.”
“You’ve always idolized him, but he wasn’t that larger than life man you’ve constructed in your imagination. He was a real man, with real faults like any other.”
“And real principles, and a real need to find the truth. Serving my country by working at the CIA is an honor. It’s a family tradition, Mama. I’m proud to continue it, and proud to be my father’s daughter.”
“I brought you back here to Charleston to keep you away from that nonsense. It’s all politics—the crazy assignments, the weird, hushed phone calls in the middle of the night—and not worth the pittance they pay you. I wanted a better life for my daughter, something normal. When you got that scholarship, I let you go to Duke to learn all those languages. I thought you were learning Hungarian to please your great-grandma!”
“Yes, that was a big part of it. Dédi taught me so much, and she was proud when I wanted to learn more of her native tongue.”
“But instead of studying to be a secretary or learning to do hair, or something else you could do until it was time to raise a family, you go and do this crazy thing!”
“I don’t want to be a secretary or do hair! There’s nothing wrong with doing those things, but it’s not what I want.”
“But then you could go back to work later, if you felt like you had to.”
“The first step to having a family is finding a man to make one with. That’s certainly not happening here in West Virginia. And a family isn’t high on my priority list right now. The decision’s made, Mom. I’ve applied for the job, been accepted into the training program, and I start right after New Year’s.”
Francine Bennet Langdon shook her head. “I will never understand you.”
Truer words were never spoken.

Is Elizabeth being an “obstinate, headstrong girl”? Or does she have the right of it? (I think most of us will side with Elizabeth on this one.)

To read where this path will lead Miss Bennet, check out Undeceived, the new novel from award-winning Meryton Press author, Karen M Cox. 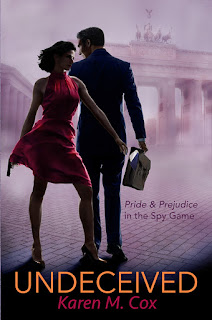 During the last gasp of the Cold War, Elizabeth Bennet, a young, forthright counterintelligence officer, embarks on an exciting assignment that would make her late father, a fallen CIA officer, proud. She transfers to Europe to investigate the legendary and elusive William Darcy, an officer in line for the coveted Soviet station chief position who’s suspected of being a double agent.

William Darcy appears to lead a charmed existence, but now he finds himself fighting for his career and against his growing feelings for the young woman he doesn’t know is watching his every move.

Elizabeth wants to throw the book at him, but the facts don’t match her preconceptions. Is Darcy being set up? Are there darker forces at work? Or is William Darcy a skilled double agent after all? Nothing is as it seems, however, and the closer Elizabeth gets to the truth about Darcy, the more she spirals into danger.

Karen M Cox writes novels accented with romance and history. All three of her published novels: 1932, Find Wonder in All Things, and At the Edge of the Sea, have garnered awards from the independent publishing industry, taking top honors three out of the five times they were recognized. Last year, she also participated in Meryton Press’s inaugural anthology, Sun-Kissed: Effusions of Summer, with her short story, “Northanger Revisited 2015.” Her fourth full-length novel, Undeceived: Pride and Prejudice in the Spy Game, will be released in early 2016.

Karen was born in Everett WA, which was the result of coming into the world as the daughter of a United States Air Force Officer. She had a slightly nomadic childhood, with stints in North Dakota, Tennessee and New York State before moving to her family’s home state of Kentucky when she was almost twelve. She lives in a small, quiet Kentucky town with her husband and children, and works as a pediatric speech pathologist. She spends her off hours reading, writing, and being a wife and mom—and spoiling her new granddaughter.

Thanks to Jakki @ Leatherbound Reviews for organizing this blog tour, and Meryton Press for the lovely giveaway!

Be sure to visit other stops on the tour!

It's giveaway time!! Meryton Press is doing a group giveaway! There are FOUR paperbacks and FOUR e-copies up for grabs, and EIGHT different people will win! Giveaway is open Internationally! To enter, just fill out the Rafflecopter below and leave a comment.


Many thanks to Karen Cox for stopping by today! I love the sound of this story, and I love the cover! I can't wait to get my hands on a copy! How about you?