The Coming of Age of Elizabeth Bennet Blog Tour ~ Excerpt and Giveaway!

Hello, Everyone! Today, I'm excited to be part of The Coming of Age of Elizabeth Bennet Blog Tour! I have an excerpt for my stop on the tour. I hope you enjoy! Be sure to read to the bottom of the post for more tour stops and giveaway details! 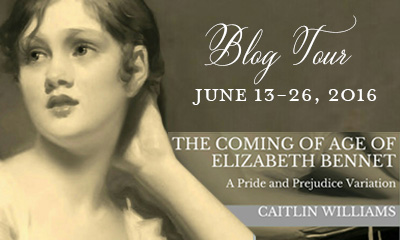 A coming-of-age story told in four volumes between Austen’s infamous couple; savor the story of the prideful man and the girl prejudiced against him, as they meet much earlier in this rethinking of Jane Austen’s masterpiece, Pride & Prejudice. Could this ‘disobedient little hellion’ one day become mistress of Pemberley and the keeper of his heart?

Elizabeth hugged herself when they had gone. Exhausted, filthy, and itchy in the rough hessian trousers and shirt, she longed for a bath and familiar food. She wanted to sit in front of a roaring fire with one of her father’s books open on her lap and not to have Mr Darcy berating her. She could see now how foolish and ridiculous she had been in running off. She did not need him to keep reminding her about her lack of judgement. She had defied her elders, lied to almost everyone and stolen clothes. Her father would have been mightily ashamed of her.

There were physical as well as emotional reminders of her folly too; her knees hurt from where she had been pulled over in the barn, and there was a stinging about her neck where her necklace had been ripped from her.

Mr Darcy’s friend returned after a little more than ten minutes, with a gown thrown over one arm and a bonnet and cloak over the other. “Now, I am sure they are not as fine as you are used to, but needs must.”

Constance had a friendly smile and Elizabeth found herself returning it.

“You are very kind, you do not know me.”

“But I know Mr Darcy, and he has asked for my help,” Constance said. “You are to go to Pemberley, I understand?”

“You will like it, you know, it is very lovely.”

“No doubt, you are going to tell me how grateful I should be; how lucky I am, as everyone else does?”

“I will not presume to tell you how you must feel, but there are worse situations a young lady could find herself in than to be a ward of the Darcys, such as the one you have just come from.” Constance paused. “How old are you, thirteen, fourteen?”

“Fifteen,” Elizabeth replied proudly, rankling a little that Constance thought she might be as young as thirteen.

“Oh that is terrible. Fifteen is quite terrible.” Constance made a face and Elizabeth laughed, instantly liking her again. “Who knows what to think or feel, or who we are supposed to be at fifteen? Shouldn’t it just be abolished and we go from fourteen to sixteen in one jump? Though you will get there, I promise. Spring, you see, always becomes summer eventually and all that seems confusing and unbearable now will not be so hard at sixteen, or seventeen or eighteen.” She squeezed Elizabeth’s hand. “You know, you are far too pretty to pass for a boy.”

“Oh, I am very ordinary looking next to Jane; my elder sister is the pretty one in our family. She is very handsome.”

There was a rap on the door and a maid brought in fresh water. Once she had washed the grime from her face and hands, Elizabeth allowed Constance to help her dress. Though she had only been without them for two days, it felt odd to be in skirts again. There was no corset to be had, but truthfully, she did not much regret the absence of that particular garment. Her mother insisted, but Elizabeth had always struggled and itched and pulled at hers, seeing it as an evil without necessity - after all, she had nothing that required holding in and very little to be pushing up. The gown hung loosely about her body, despite the string ties being pulled in as far as they would go, but Constance’s maid must have been as short of stature as she, for it was the right length and once the cloak was put around her and the bonnet pulled down low, she felt almost like a young lady of Longbourn again.

Try as he might, Darcy could not find a private coach or driver for hire. Some of the passengers from the northbound stage, which had been delayed due to the driver having fled after the confrontation in the barn, had secured the services of what seemed to be the only rentable barouche in town. He paced and fumed. Money, in this case, could not help. He could not buy something that was simply not available and time was of the essence. The facts were that he was a single man with a strangely attired, very young girl, sequestered in a room he had stupidly taken under his real name. They needed to leave and very soon. Darcy felt the threat of scandal breathing down his neck and was not inclined to let it catch up with him.

He cursed and did something that made him shudder. He did not know how he would bear the smells, the hot breath and the course manners he would encounter, but feeling he had no other choice, he went to the pay the coachman for two seats on the London bound stage. Once this was done, he secured a glass of wine and climbed the stairs again. He knocked on the door and admittance was granted. He blinked a little at the sight of Elizabeth Bennet in cloak and bonnet; such was the alteration in her appearance and stood stupidly, with the door open behind him for several moments, before coming to his senses and shutting it.

“Do you have relatives in London, Miss Bennet?”

“Yes, he is married and has two children.”

“And does he keep a respectable house?”

She looked offended, but Darcy had no time to spare on her sensibilities. “Good, then I believe the best course of action will be to take you there. We must go by stage, ‘tis unavoidable. It leaves at half-past the hour, I will expect you downstairs at five and twenty past.” He put the wine on a table, nodded curtly, bowed deeply towards Constance and went to quit the room again. In great haste, he threw the door wide open and sheer bad luck brought Emma Balcombe passing by. They both started in surprise at the sight of one another. 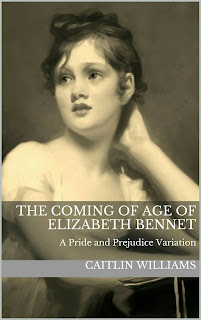 The very worst has happened. Mr Bennet has died, leaving his wife and five young daughters bereft. The family estate, Longbourn, is now lost, entailed away and fifteen-year-old Elizabeth Bennet is to go two hundred miles away to live with strangers. George Darcy, repaying a debt of gratitude, has offered to take her to Pemberley, to live under the mantle of his care and be raised alongside his own daughter, Georgiana.

But on the day she is to leave Longbourn forever, young Elizabeth, grieving and confused, runs off into the Hertfordshire countryside. Fitzwilliam Darcy gives chase, telling his father he will have her back in an hour or two. Luck and fate, however, are not on his side and capturing Elizabeth Bennet turns out not only to be more difficult than he could ever have imagined, but events conspire to turn her little adventure into his worst nightmare.

The prideful man and the girl prejudiced against him, meet much earlier in this rethinking of Jane Austen’s masterpiece. Elizabeth grows up under the ever-watchful eye of Mr Darcy, from fifteen to twenty-one. She errs and falters, there are stumbles and trips, but could this ‘disobedient little hellion’ one day become mistress of Pemberley and the keeper of his heart? 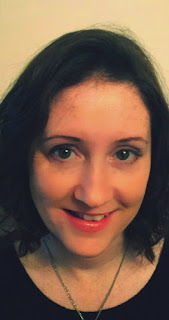 Caitlin Williams lives in Kent, England, with her family. She fell in love with all things Regency as a teenager, but particularly admires the work of Jane Austen and the way she masterfully combines humour and romance, while weaving them through such wonderful stories and characters.

Pride and Prejudice is Caitlin’s favourite novel and she finds Mr Darcy and Elizabeth Bennet so deliciously entertaining that she likes to borrow them from Ms Austen and enjoys the challenge of putting them in different places and situations.

Her debut novel, Ardently, was written as a hobby, usually with her laptop balanced on the kitchen worktop, typing with one hand, a glass of wine in the other, while she also attempted to cook dinner and keep her children from killing each other. The success of Ardently was as much a surprise to her, as it was to anyone else, and she has been thrilled and genuinely thankful for the positive responses and reviews it generated.

Her second novel, The Coming of Age of Elizabeth Bennet, is a portrait of a much younger Elizabeth, who is thrown into an extraordinary set of circumstances due to the premature death of Mr Bennet, and she hopes you all enjoy it very much.

It's giveaway time! Ms. Williams is kindly giving away eight e-copy of The Coming of Age of Elizabeth Bennet to eight lucky winners! To enter just fill out the Rafflecopter below and leave a comment, please! Open Internationally!


Many thanks to Claudine Pepe @ JustJane1813 for organizing this blog tour, and to Caitin Williams for providing us with this lovely excerpt and generous giveaway! Thanks, Ladies!

What did you think about the excerpt?