Hello, my friends! It's October, and you know what that means! Scary reads, or maybe a paranormal will do! I have one some of you might enjoy, Dearest Bloodiest Elizabeth by Colette Saucier! I haven't read it yet, but I did read the first Pulse and Prejudice (you can read my review here) and enjoyed it. But be forewarned! Dearest Bloodiest Elizabeth is a darker, sexier and more violent than your typical Austen retelling. In fact, I have been told this is NOT Austen. 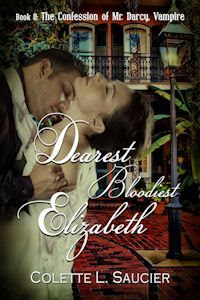 His story continues in Dearest Bloodiest Elizabeth, the lurid, lusty sequel to Pulse and Prejudice, as death shadows the newlywed Darcys from Pemberley to the parlors of Regency London to the courtyards of Antebellum New Orleans. As Elizabeth discovers the trials and travails of marriage to a vampire, can Darcy ever believe that she loves him as he is? Or will his jealousy tear them apart?


FTC Disclaimer: Link to Amazon. I am an Amazon Associate. Should you purchase a copy of the book through the link provided, I will receive a small commission. Thanks!

Crimson drops fell onto the white snow, staining it pink.

Darcy had not intended this—to drink from his wife—when he claimed his prize of a kiss after catching her as they raced through the hedge maze at Pemberley. Elizabeth had actually done surprisingly well in evading him, considering his intuitive abilities; but, of course, he caught her—laughing in his arms, eyes ablaze, cheeks chafed from the cold.

“And now my prize!” As had so often occurred in the span of their brief marriage, his tender kiss had escalated quickly into fervent ardour. The laughter then in her eyes, his wife had taken hold of the lapels of his greatcoat and, falling back onto the snow, pulled him down with her. As their kisses deepened, so, too, had his hunger and desire. He pulled off his gloves and trailed his cold fingers down her face. Untying her bonnet and unfastening her cape, he exposed her neck for his lips and his teeth.

She moaned softly as he drew the blood from her throat, sharing her warmth and her pulse, savouring the rich, metallic taste. He pulled back to watch her, only then noticing that a few precious drops of lifeblood had escaped his embrace and fallen onto the snow.

“William,” she whispered in a half-plea, her hand running over the front of his trousers to convey her intent.

He gazed into her eyes. “Should we not go in? Are not you cold?”

“Cover me to keep me warm.” She wrapped her arms around his neck and pulled his mouth onto hers, sharing the taste of her blood as their tongues intertwined.


Darcy pulled at her skirts and brought the hem to her knees. He reached his hand up between her cold thighs to the hot core that drew him in. She gasped against his mouth as he touched her there, but he wasted little time in freeing himself from his trousers and thrusting deep within her. 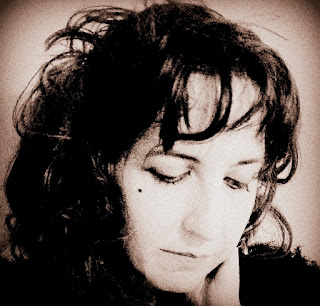 Colette Saucier began writing poems, short stories, and novellas in grade school. Her interest in literature led her to marry her college English professor, but eventually a love of history encouraged her to trade up to a British historian.

Technical writing dominated her career for twenty years, but finding little room for creativity in that genre, she is now a full-time author of fiction.

Pulse and Prejudice was named “A Most Inventive Adaptation” by Elle Magazine (April, 2016). It was the 1st Place Winner in its category in the 2013 Chatelaine Awards Romantic Fiction Contest and is listed in Chanticleer’s 2013 Best Book Listing. Colette dedicated 15 months traveling to Europe and Britain, researching Regency England and vampire lore and literature, to complete for historical accuracy. It remains faithful to nineteenth century literary conventions and Jane Austen’s narrative to create a compelling, thrilling paranormal adaptation.

Colette was selected a “2013 Amazon Breakthrough Novel Award” Semi-finalist and named “Debut Author of the Year” by Austenprose for All My Tomorrows—now expanded and republished as The Proud and the Prejudiced—which was also chosen Austenesque Reviews “Favorite Modern Adaptation” 2013.

Colette’s latest novel—Book II: The Confession of Mr. Darcy, Vampire—entitled Dearest Bloodiest Elizabeth, follows the newlywed Vampire Darcy and his bride Elizabeth from Britain to Antebellum New Orleans. Due to her devotion to historical accuracy, she spent two years researching Creole Society and Nouvelle Orleans in the years following the War of 1812.

A bestselling and award-winning author under multiple pseudonyms, she is currently working on multiple projects including a parody of Wuthering Heights and a children’s book based on the inspiration for the dog Amadeus from Pulse and Prejudice and Dearest Bloodiest Elizabeth.

Colette lives in a lakeside community in South Louisiana with her historian husband and their two dogs.

Thanks for stopping by! I hope you enjoyed the excerpt! Do you like vampire stories?