Hello, Friends! I'm delighted to be part of Sophie Turner's Mistress Blog Tour! At this stop, Sophie brings us an excerpt that certainly left me hanging...wanting to read more!! I hope you enjoy! 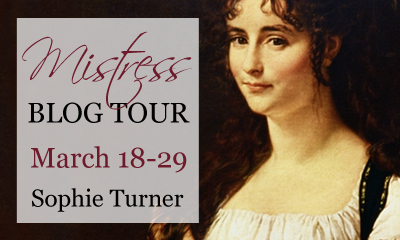 Good morning, Candy. It’s such a pleasure to be here with you and your readers to share this excerpt from my latest release, “Mistress.” In this story, Elizabeth is a young widow. One of the interesting things about writing Elizabeth as a widow was that she was allowed to do different things in her courtship with Mr. Darcy than an unmarried Elizabeth could. Various circumstances, including a troublesome tenant, lead to her going for daily drives with Darcy in his phaeton, for at this time it is not safe for her to go out walking by herself.

Mason dressed him, and then Darcy left the man tidying up the room, himself going down to breakfast. If there was any advantage to his rising even earlier than he usually did, it was that he was easily the first to arrive for the meal, and could usually break his fast well before the later-rising, more unpleasant members of the house party made their way in. On this morning, he breakfasted with no-one, as it turned out, although Netherfield’s servants had learned his ways and had a pot of coffee at the ready when he walked in. This suited Darcy quite well, and he slipped out of the house and down to the stables; he would go for a brief ride to pass the time, then make the drive to Longbourn.

Elizabeth was ready for him when he completed the latter; she came out wearing an exceedingly fetching bonnet, although Darcy suspected his opinion of the bonnet had everything to do with the countenance it framed. He assisted her up into the phaeton and then climbed in himself, quietly checking the case beside him on the seat before he took up the ribbons and told his horses to walk on.

“Where do you wish to go today? Out toward Oakham Mount, perhaps?” Darcy asked. Yesterday she had asked him if he would drive her into Meryton in a tone of some embarrassment, as she was of the hope that a book she had ordered had come in.

Darcy set his horses trotting down the lane thither, then asked, “And how do you find Waverley, so far?”

Elizabeth’s embarrassment, he had learned, was in exposing herself as a novel reader, but it had been alleviated by his assuring her that he very much enjoyed novels as well, and while he had not yet read Waverley, he intended to, and would be interested to learn her opinion.

“I have not progressed very far, but I am enjoying it. It is much easier to be stuck indoors when one is absorbed in a good book.”

“I entirely agree, and it should not be too much longer now, before Boyce may be arrested.”

“I hope so – even with my books, I hardly know what I should have done if not for our drives. I believe I would have gone crazy, trapped inside that house. I cannot thank you enough for giving me so much of your time.”

There was something peculiar in her tone, when she spoke of being trapped inside that house, and Darcy glanced over at her sharply. He could not make out anything more of her meaning by her countenance, however, and when he spoke, he endeavoured to do so lightly. “It is nothing. You may repay me by loaning me Waverley when you are done.”

“If I can loan you a book, I shall consider that quite an accomplishment.”

“I fear someone has been telling you tales of the library at Pemberley. It is larger than that of Netherfield, certainly, but it – ”

“No, no, you must not demean your library. I have imagined it as a most delightful room indeed, and I do not wish to have my imagination contradicted. And I have heard it said that you are always buying books.”

“I should not say always.”

“Well, then, make your confession – how many books have you purchased this year?”

Darcy began a count, lost track at three and twenty, and finally said, “Upwards of twenty, I believe.”

She laughed heartily. “And still the other half of the year remaining. No, sir, I will not allow you to demean your library.”

“I was going on a long sea voyage,” said he, defensively.

“Oh, if I feel trapped inside a house, I fear I should have gone mad on board a ship. I know you could walk about on the deck, but still, I do not know how you bore it.”

“The same way one bears any journey, I think – for the promise of what is to come.”

“Yes, of course, to see your sister. And then to return to your library at Pemberley,” she said, with a teasing smile.

No, Elizabeth, it was to return to you – to finally have my second chance after those painful years of heartache, he thought, but did not say.

Darcy’s lack of a response brought a lull in their conversation, but they had long since reached a point of comfort in each other’s presence that precluded the need to be constantly talking. They reached Oakham Mount, a sight Darcy found rather underwhelming, having been reared on childhood tours of his native county. He did not share this with Elizabeth, however, and instead listened sympathetically to her lamentations on how she would have liked to walk to the top as he turned the phaeton.

They returned quietly as well – it was a beautiful morning, and Darcy could see she was enjoying it as much as he was. Her enjoyment must have been greater, though, for Darcy’s opportunities to be out of doors were not so limited as hers were presently. He kept his team trotting on at a steady pace, until he was shocked to feel Elizabeth’s hand clap down upon his knee, as she gasped, “My God, it’s him!” 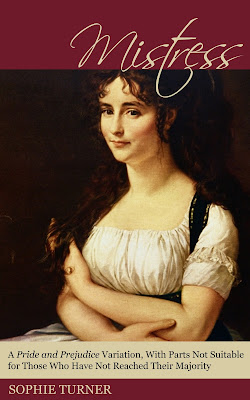 One night, to decide his entire life's happiness.

Chastened by Charles Bingley following Mr. Bennet’s untimely death, Fitzwilliam Darcy determines he will offer marriage to Elizabeth Bennet, but she marries another.

Years later, a widowed Elizabeth is mistress of Longbourn, and has vowed she will never marry again. A house party at Netherfield brings them back together, but Darcy will have to win more than her heart if he is to have any chance at making her mistress of Pemberley.

Readers of Sophie Turner's more chaste Constant Love series should be aware that this novel contains decidedly adult content at certain parts of the story. 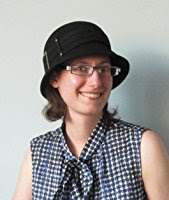 Sophie Turner worked as an online editor before delving even more fully into the tech world. Writing, researching the Regency era, and occasionally dreaming about living in Britain are her escapes from her day job.

She was afraid of long series until she ventured upon Patrick O’Brian’s 20-book Aubrey-Maturin masterpiece, something she might have repeated five times through.

Alas, her Constant Love series is only planned to be seven books right now, and consists of A Constant Love, A Change of Legacies, and the in-progress A Season Lost.

She blogs about her writing endeavours at sophie-turner-acl.blogspot.com, where readers can find direction for the various social drawing-rooms across the Internet where she may be called upon.

It's giveaway time! Woot! Sophie Turner is giving away two e-copies of Mistress to two lucky readers at each of her blog stops!

Many thanks to Sophie Turner for stopping by with a lovely and enticing excerpt, and for generously offering two of my readers a chance to win an e-copy of her book!

Also, a BIG thanks to Claudine Pepe @ JustJane1813 for all the work she puts into organizing these blog tours.

Oh my gosh! Did that excerpt drop a bomb there at the end, or what?! Lol! What did you think? Please leave a comment and show some love to Sophie!
Posted by Candy @ So little time... at 12:30 AM