Hello, friends! Today I have Virginia Kohl visiting with an excerpt from her book, True Love Comes to Delaford! She is also giving away one e-copy of her book to one of my lucky readers! Details for the giveaway can be found at the bottom of the page. 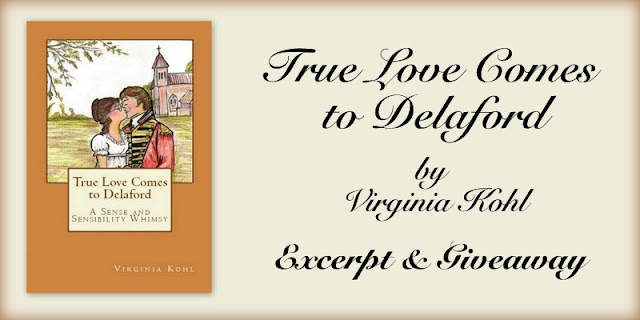 My introduction to Jane Austen and the Regency era was through her first novel Sense and Sensibility. From the beginning, my favorite characters were Colonel Brandon and Elinor Dashwood. I loved the genuine respect and esteem they had for one another. It was easy to imagine this devoted friendship developing into a lasting love match. True Love Comes to Delaford is their story.

In this excerpt, Elinor Dashwood has an unwelcome encounter while at a Ball in London:

When the final dance began, Elinor stood near the doorway that led out to one of the corridors. She was approached by a man she had not seen since her first Season.

“Good evening, Miss Dashwood. It has been a long time since I have had the pleasure of seeing you at a ball. Instead of dancing, we shall take a stroll through the gardens. Where this time, we will finish what we started.”

He grabbed her wrists before she could turn and leave. When she asked him to let go, he leaned close enough for her to smell the foul stench of liquor on his breath.

“That was not a request. I intend to collect what I am due.”

The demand sent chills up her back. He dragged her halfway down the passageway before realizing it did not lead to the terrace. Cursing under his breath, he opened the door to the nearest room.

“This will have to suffice. Now get in there, you hussy.”

When he faced her once again, Elinor knew this was her last chance. She kicked him in his groin with all her might. He dropped to his knees. Letting go of her, his hands reached for the inflicted area.

Not wasting a second, the young woman raced towards the safety of the ballroom. Chancing a look behind her, she did not notice the decorative rug before tripping over it. As she righted herself, the man caught up with her. He took hold of her left wrist and forcefully pulled her to face him. When she involuntarily swung around, he grabbed her right one before she had a chance to react.

“I will teach you to run away from me, you damn trollop. Your little act has earned you an especially painful experience,” he growled, digging his fingers into her skin.

Her eyes darted up to him. She expected to be dragged back down the hallway, however, to her astonishment the drunkard suddenly let go completely.

A strong, male hand grabbed his shoulder, forcing him to turn. A fist collided with his nose, sending him to the ground. He looked up in anger, blood covering his face.

“What in damnation? Find your own bit of muslin, this one is mine!”

His expression turned to one of genuine fear when the taller stranger took a firm hold of his lapels and pulled him up quite easily. The newcomer’s eyes darkened with a look of absolute fury, as he slammed the other man against the opposite wall.

“The lady is not yours. If you so much as touch a hair on her head ever again, I will hunt you down, not only in this life, but in the next. Do I make myself perfectly clear?”

He was fully Colonel Brandon now. His usual warm tone was replaced by the militaristic one he had used so often in his army days. He loosened his grip, following several seconds of the libertine’s fervent nods. Dropping down to the floor, Elinor’s attacker quickly scrambled to his feet and ran off without looking back.

After making sure the man was truly gone, the soldier turned to Miss Dashwood. When he suggested going to the terrace for some fresh air, the fiercely independent woman stiffly nodded without saying a word. Christopher had seen the same look numerous times on the battlefield—she was visibly shaken by the confrontation.


If you enjoyed this excerpt, True Love Comes to Delaford is available in both Kindle and trade paperback. 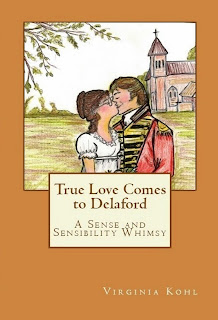 Elinor Dashwood’s father dies, leaving the fate of his family in the hands of two self-serving vultures. With diminished chances of making a respectable match and several uneventful Seasons behind her, the fiercely independent, bibliophile focuses on helping her family adjust to their new life. However, as her friendship with an honorable gentleman grows, the twenty-year-old begins experiencing feelings she never thought possible.

When Colonel Brandon resigned from the army to become the master of his family’s estate, he thought his best days were behind him. For years, the bachelor of five-and-thirty has successfully avoided every attempt of his well-meaning friends to find him a suitable wife. Although, he soon finds himself questioning his long-held beliefs regarding his single status, when Miss Dashwood strolls into his life.

In this refreshing whimsy, Virginia Kohl explores the possibility of Elinor Dashwood and Colonel Brandon’s devoted friendship turning into more.

Virginia Kohl has been fascinated with the regency era since discovering Jane Austen’s works at the age of eleven. While others dreamt of Willoughby, it was Colonel Brandon who stole Virginia’s heart from the very beginning. Originally from Germany, she shares her Texas home with her illustrator mother and faithful rescue dog. When not passing her love of learning on to her students, this college math professor enjoys reading, writing, and being an active member of her local writer’s guild.

The accompanying tea blend can be found at www.adagio.com/signature_blend/blend.html?blend=127735

It's giveaway time! Virginia is generously giving away one Kindle e-copy of True Love Comes to Delaford to one lucky So Little Time... reader!  To enter, please leave a comment below!

Congratulations, Virginia, on the release of your debut novel! That's awesome! And many thanks for stopping by today and for offering one of my readers a chance to win an e-copy of the book!

Wow! What did you think of that excerpt! Pretty exciting! Poor Elinor being man-handled by that scoundrel! And Colonel Brandon to the rescue! *sigh*