The Ladies of Rosings Park by Shannon Winslow ~ Excerpt & Giveaway!

Hello, friends! I'm delighted to have Shannon Winslow visiting with us today! She's brought with her an excerpt from her new book, The Ladies of Rosing Park. She also poses an interesting question. Read further to find out!

Also, there's a chance to win a copy of The Ladies of Rosing Park! Details are at the bottom of the post! 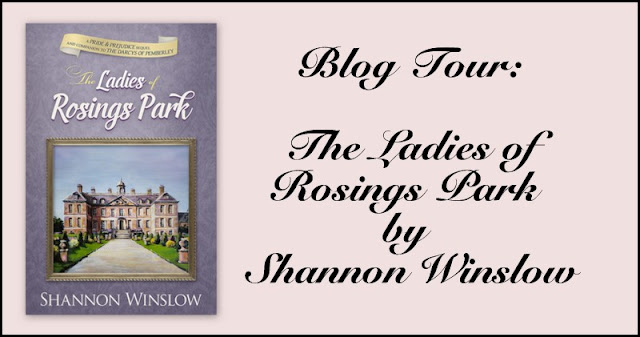 Although The Ladies of Rosings Park begins during the timeline of Pride and Prejudice, it’s primarily a sequel – what happens to Anne de Bourgh after Darcy and Elizabeth ride off into the sunset together. Jane Austen tells us nothing, but when I thought about it, two things seemed pretty clear. First, as an heiress (even a sickly one), Anne would have plenty of suitors. And second, Lady Catherine would never stop conniving until she got her daughter credibly married.

We have seen a conniving mother in an Austen story before, but Mrs. Bennet had poor daughters to marry off, not a rich one. Emma is Austen’s richest heroine, but her mother is dead and her father wants her to stay quietly at home forever! So Anne’s situation is quite different, and it brings its own unique set of problems to overcome.

Here’s a new excerpt as Anne imagines the dubious fate that awaits her:

[With Darcy and Elizabeth’s wedding past,] a long, bleak winter loomed before us. But Mama promised brighter days ahead if only I would exert myself.

“Your situation is far from hopeless, and I shall not stand idly by,” she declared. “You may be sure of that. I have already begun making plans. Once word gets out that you are free, there are any number of eligible gentlemen who will take an interest. Then it will only be a matter of choosing the best offer.”

And of course, I knew who intended to do the choosing.

In my mind’s eye, I could already see the line forming – through the hall, out the door, and down the front steps – for a chance at my tremendous fortune.

Mama would be very organized and systematic about it this time. She would designate a day (or perhaps two if the pool of suitors were too large). Each gentleman would sign his name when he arrived, present his documentation of pedigree and prospects, and then take a seat in the drawing room with the other contenders. There, he could view my portrait as he waited, to see what it was he was competing for, what the victor must be prepared to accept along with the money.

Our solicitor would first examine the evidence of eligibility provided, judging according to Mama’s stated minimum requirements. Those who failed to qualify would be sent on their way at once, while the successful candidates were passed on to Mama to be further scrutinized and interviewed, one by one.

Where would I be all this time? No doubt closeted away upstairs somewhere, playing no part in the process. If I were lucky, I might catch a glimpse from an upper window as the gentlemen came and went. I could expect nothing more. Perhaps even that would be enough for me to form some opinion, though. If I liked the look of a man in a green coat with an elegant yet manly way of moving, I might, by concentrated effort, induce him to pause and turn his gaze upwards. I would then observe his fair hair and excellent countenance. Our eyes would meet, and he would smile in a knowing way. In that instant, I would instinctively and accurately appraise his character. He was entirely honorable. He understood me and sympathized with my predicament, and he would always treat me kindly. We would surely be very happy together. Or at least we could have been.

No doubt Mama would decide on somebody else – probably a gentleman with a title, better connections, and old enough to be my grandfather. Then she would inform me who I was to marry and when. In an attempt to soothe away any protest, she might offer to entrust some minor detail into my hands – deciding what color flowers I preferred, for example, or choosing between two eligible dates for the ceremony. Should I like to be married on a Tuesday or on a Wednesday? I could not see that it much mattered, so I considered the choice again.  Tuesday or Wednesday?

“Tuesday or Wednesday, Anne? Are you listening to me?” asked Mama.

I tried to gather in my straying thoughts. “Tuesday or Wednesday for what?” I inquired, coming back to the present.

“Sometimes, child, you do try my patience! Tuesday or Wednesday for the doctor? I must send word which day we want him. Did I not tell you that I have another medical man coming to consult on your case?”

I sighed. “No, Mama, you did not tell me. What is this one called?”

“He is Mr. Essex – a younger man this time, university educated with all the latest knowledge and newest techniques. He sounds very promising to me, and he comes highly recommended. Mrs. Metcalf says he is the toast of all London.”

“Then, by all means, let him come on Tuesday,” I said sardonically. “The sooner he begins my cure, the better.”

I had been down this road a dozen times before. Most recently there had been Mr. Conner, and before him Mr. Stewart, Mr. Plowright, Mr. Parrish, and Mr. Silverwood – all tried and ultimately dismissed. A new man – always someone highly recommended – came to Mama’s attention one way or another and was called in. After he examined me, he invariably claimed to know just what the problem was and how to solve it. Six months later, however, after enduring all manner of abuse at the fellow’s hands, I was no better. Then it was on to the next, who was just as confident of a cure. I had been through it too many times to allow my hopes to be raised again.

Nobody seemed to know what the trouble was, and I remained as ignorant as all the rest. I told each one who came to consult, “I am always tired, often to the point where I can manage nothing more than getting dressed before I am exhausted. I sometimes feel terrible pains in my head that last for hours, and I often have no appetite. One day might be better and another worse, but the sickness never entirely leaves me, and it has been going on like this for years.” Ever since my father died, in truth, although I had stopped mentioning that fact since no one seemed to think it relevant.

I told the same to Mr. Essex when he came…

The standard reaction at this stage is probably, “Poor Anne!” But this is only where the rest of her story begins! I can tell you this much; Mr. Essex’s arrival represents a major turning point. With a little help from her friends, Anne ultimately finds the strength to stand up for herself, overcome her troubles, and find her HEA. I hope you will follow her on that journey!


So, which would you rather be? – a lady of small fortune like (Elizabeth, Elinor, or Marianne), likely to be overlooked and considered too poor to marry, or a lonely heiress, at the mercy of fortune hunters and never able to trust that a man cares for more than her money? Jane Austen gives us mostly the first scenario, which was her own personal situation. I wrote a novel about the other situation (For Myself Alone). As Anne de Bourgh discovers in The Ladies of Rosings Park, it’s a different set of issues, but the girl faces problems either way. 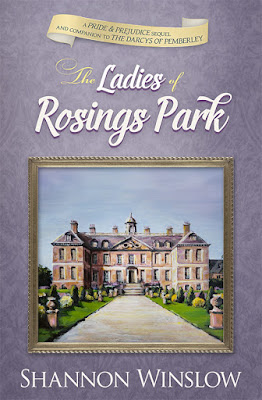 The Ladies of Rosings Park

At first glance, Anne de Bourgh doesn’t seem a promising heroine. But beneath that quiet exterior, there’s a lively mind at work, imagining how one day she will escape her poor health and her mother’s domination to find love and a life worth living.

Now Anne finally gets the chance to speak her mind. But Lady Catherine demands equal time. Even Charlotte Collins and Mrs. Jenkinson get into the act. Chapter by chapter, these ladies of Rosings Park take turns telling the tale from the moment Elizabeth Bennet sets foot in Hunsford, changing everything. Is Anne heartbroken or relieved to discover Mr. Darcy will never marry her? As an heiress, even a sickly one, she must have other suitors. Does Lady Catherine gracefully accept the defeat of her original plan or keep conniving? Will Anne’s health ever improve? And what really happened to her father?

Complete in itself, this work expands The Darcys of Pemberley series laterally, beginning during the timeline of Pride and Prejudice and carrying beyond to reveal the rest of Anne’s story. When a young lady is to be a heroine… something must and will happen to throw a hero in her way. (Jane Austen, Northanger Abbey)

It's giveaway time! Shannon is graciously giving away one copy of The Ladies of Rosings Park to one of my lucky readers!

Many thanks to Shannon for visiting us today and for offering to give away a copy of her book to one of my readers!

So, readers, which would you rather be? – a lady of small fortune or a lonely heiress?
Posted by Candy @ So little time... at 12:30 AM