Summer of Scandal by Syrie James ~ My Review 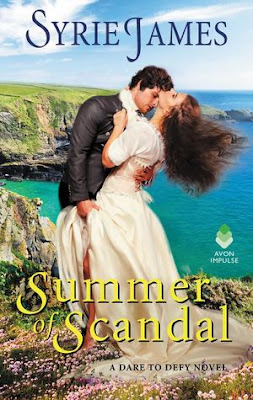 Summer of Scandal (Dare to Defy #2)
by Syrie James

Madeleine Atherton is no typical American heiress, sent to England to marry an English lord. A brilliant college graduate who secretly dreams of becoming a published author, she wants to marry for love. After receiving a proposal from a future duke, Madeleine flees the London Season for Cornwall to seek her sister's advice, never expecting her decision to be complicated by a charming, handsome earl she's certain she dislikes—even though his every touch sets her blood on fire.

Charles Grayson, the Earl of Saunders, has secrets and ambitions of his own. Although under pressure from his mother and gravely ill father to marry his cousin, Charles cannot find the words to propose. But this fascinating American visitor does not figure into his plans, either.

Thrown together unexpectedly at Trevelyan Manor, Madeleine and Charles struggle to rise above their intense attraction. But as things heat up between them over a summer that becomes increasingly scandalous, Madeleine and Charles will both be forced to make a difficult choice. Can two dreamers dare to defy convention and find their own happily ever after?

Summer of Scandal is a delightful story set in 1889, England. This stand-alone novel is the second in the Dare to Defy series focusing on Madeleine Atherton, the second daughter of a wealthy American family. I didn’t read the first book but had no problem picking this one up.

After receiving a proposal of marriage from Lord Oakley, Madeleine impulsively takes the train from London to Cornwall to discuss the matter with her sister, Alex. Only to find Alex has gone to Bath, and no one is at the station to greet her. Lord Saunders, whom Maddie has been avoiding all season, to the rescue! He offers to take her to her sister's estate to wait for her return. But a storm has washed out the road, and she has no other choice but to go to his family estate.

The summer sizzles when Maddie finds herself alone with Lord Saunders more than once, but nothing can come of it because he is bound by a promise he made to his parents to marry his cousin, Sophia. Besides Maddie would be crazy not to accept Lord Oakley’s proposal of marriage, right?! She would be a duchess for heaven's sake!

I love that both Maddie and Lord Saunders are creative and innovative beings. Maddie wants to be an author and is writing a novel. Lord Saunders is an inventor and artisan. Both hide their talents because high society would frown upon it. It’s just not done! That would be too much like being in trade, and their families would never allow that!

Madeleine is such a wonderful character! She is smart (a college graduate, not something many women of the time did), independent, and kind.  Unconventional in not only her writing but likes to discuss new ideas and explore other options, and she's not afraid to share her opinions.

Maddie also formed a dear friendship with Sophia. Not wanting to hurt Sophia, Maddie tries to steer clear of Lord Saunders, especially since every time they are alone together there seems to be kissing involved!

As much as I loved both Madeleine and Lord Saunders I was disappointed by some of their actions.

Overall, I greatly enjoyed Summer of Scandal! It was a fun read!

Note: I would recommend this for mature readers.

Disclaimer: I received an e-copy of the book from the publisher for my honest review.


Syrie James is the bestselling author of a dozen critically acclaimed novels of historical fiction, historical romance, contemporary romance, & YA. Syrie is passionate about strong women, sexy heroes, and books that keep you turning pages long into the night! Her books have been translated into eighteen languages.

Syrie's name, which was her mother's invention, is pronounced just like the iPhone App, but she likes to think her name is spelled better. :)

Syrie loves All Things British and enjoys reading in a variety of genres. Syrie lived in Paris as a child and had visited more than two dozen countries by age eight, which instilled in her a lifelong love of traveling. Her other favorite pursuits include movies, theater, great food, games with family and friends, Scrabble, photography, sewing, and the out of doors. Syrie designed and maintains her website, syriejames.com. She welcomes visitors and messages, and invites you to follow her on Facebook, Instagram, and Twitter!

Syrie lives with her husband in Los Angeles, California. She is a member of the WGA, RWA, and a life member of JASNA (the Jane Austen Society of North America). She spent many years as a screenwriter and enjoys writing both novels and screenplays.

Here is another book from Syrie James that I've reviewed:

Many thanks to Syrie James and Avon Impulse for giving me the opportunity to read and review this book!