Hello, my friends! I'm so excited to be kicking off this blog tour! A Chance Encounter in Pemberley Woods sounds like a wonderful story, and the excerpt left me wanting more! I hope you enjoy it as much as I did! But first Brigid Huey is sharing a little of her journey into writing her debut novella. Be sure to read to the bottom where you will find details to the giveaway! 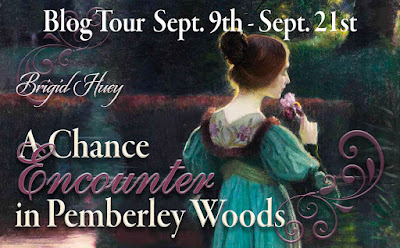 Thank you, Candy, for having me here on your blog today. I’m quite excited to be here and start my very first blog tour! ​A Chance Encounter in Pemberley Woods​ is my debut work, so I thought I would share a little about myself and my love of Jane Austen. 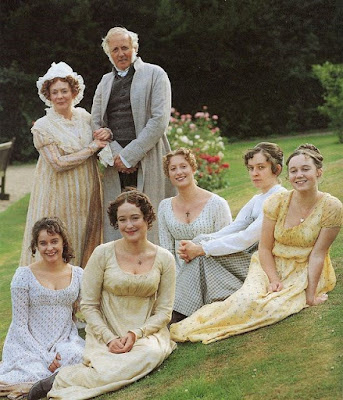 I fell in love with Jane Austen’s work back in 1995 when the BBC miniseries of Pride and Prejudice aired in the United States on A&E. My dad was the one who had heard about it, and made sure we all sat down to watch. I was enthralled.

Being only thirteen, and a late bloomer at that, it wasn’t Mr. Darcy that first caught my attention. It was the whole package. The beautiful dresses, stately homes, ballrooms, and horse-drawn carriages all drew me in. And Elizabeth Bennet? Well, she fit right in with the other strong women I looked up to as role models. 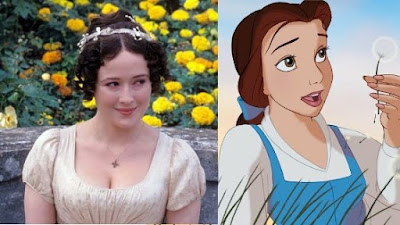 I was immediately drawn into her thoughts, feelings, and pursuits. I admired her courage and her ability to look inward and change her mind. Oh, I didn’t think about it in that way when I was thirteen exactly, but I knew there was something special about her. I’ll be forever grateful for my mom and dad who both introduced me to the miniseries and then encouraged me to read the book.

A few friends have asked how I came up with the idea for this story. The truth is, I don’t know. I can tell you that I was at a friend’s house for our playgroup (I have a nine-year-old and a five-year-old that I homeschool). My little boy had climbed high up into a pine tree, so I sat on the damp grass to wait until he called for some help getting down. And I thought of these words: “Madam! Are you quite well?”

I could see Mr. Darcy flying off his horse in concern for Elizabeth Bennet. The story had its start! Okay, I must be honest. What I really wrote down in my tiny notebook that I carry around in case inspiration hits were the words, “Madam, are you alright?” And the wonderful people at Meryton Press set me straight about the very modern origin of ‘alright’.


And now I’d like to share a scene with you from ​A Chance Encounter in Pemberley Woods​. It comes from the very first scene in the book. Darcy is riding home to Pemberley when he has an unexpected encounter! 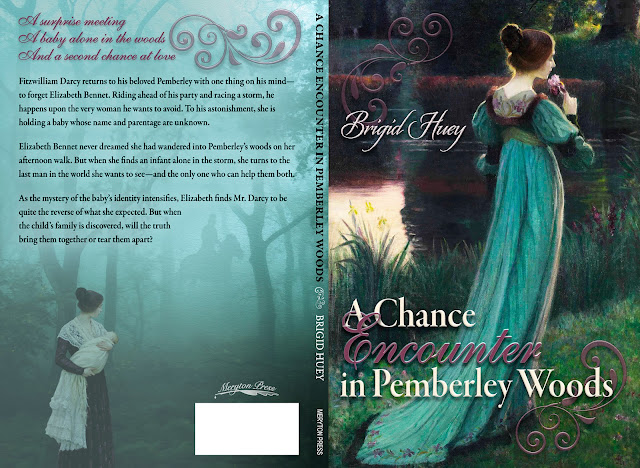 Fitzwilliam Darcy glanced at the sky, noting the ominous black clouds gathering over the hills near Pemberley. He could ​already​ hear the deep rumbles of thunder within them though they were still a few miles ​off​. He ​would​ ​likely be drenched​ in a few minutes, for there was no way he ​would​ reach his home before the skies released their torrent. Although he felt sorry that his horse Falcon ​would​ have to ride through the rain, for himself he felt only relief. ​Perhaps​ the storm ​would​ purge him of his restlessness.

It was worth a thorough drenching to have a few precious hours alone without having to endure the constant sycophantic posturing of Miss Bingley. Darcy felt a momentary twinge of regret at leaving Georgiana with the Bingley sisters. Yet he knew that she understood. He had become downright uncivil last night at dinner, and it was Georgiana who had urged him to ride ahead. She knew how much solitude calmed his temper.

What she did not know was the reason for his agitation. ​Caroline Bingley’s attempts to secure him as a husband were irritating to be sure, but it was not this alone that troubled him. Miss Bingley’s behavior reminded him of his own in months past, and he felt the sting of shame as the woman spoke ​slightingly ​of others. She was proud and unfeeling just as he had been.

Darcy thought again of Elizabeth Bennet’s just reproofs. She had accused him of arrogance and conceit, and ​rightly ​so. Her adamant refusal of his proposal still made him shudder. What a fool he had been! He had asked for her hand with such pride of purpose, absolutely ​assured of her acceptance.

A slight rain began to fall as he pulled Falcon up short and ​mentally ​shook himself. ​He was done​ dwelling on his own failings, having vowed instead to attend to his faults through action. Glancing again at the sky, he ​decided to take​ the shorter path through the woods. The path was narrow, but Falcon was surefooted, and no one would be out walking in this weather.

As committed as he was to leaving the past behind, Darcy could not rid himself of one scathing rebuke. ​Elizabeth’s words came back to him as they did almost every day. “​You
could not have made me the offer of your hand in any possible way that would have tempted me to accept it.​”

It mattered not that his respect for her opinion traveled so far as to influence his behavior. His attention to her criticisms ​would​ not change the truth. Elizabeth Bennet had no wish to know him, let alone marry him. ​She was not his, and she would never be.

Lightning flashed as the rain began to pour ​down in earnest​, and Darcy quickened his pace. As he rounded the familiar bend that took him to the clearing just a mile from Pemberley, ​he was startled​ to realize he was no longer alone. A woman was standing in the open space between the trees, staring up at the sky.

He dismounted at once and approached her, noticing as he did so ​that ​she was holding a large bundle. She had turned her back when he rode into the clearing, and her attention was now on the blankets in her arms.

She was petite, the bundle ​seemingly ​overwhelming her person. The harsh wind had blown her bonnet, so it hung from her neck by its light-blue ribbon. Her chestnut curls had fallen out of their coif, and they blew ​about​ her ​in a wild manner​. His heart clenched. Good God, she looked ​like​... 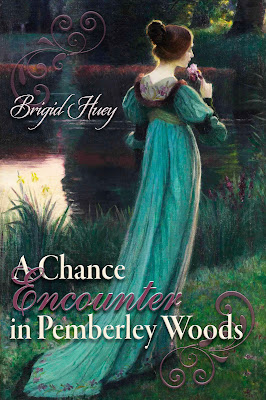 A Chance Encounter in Pemberley Woods
by Brigid Huey

A baby alone in the woods

And a second chance at love

Fitzwilliam Darcy returns to his beloved Pemberley with one thing on his mind ̶ to forget Elizabeth Bennet. Riding ahead of his party and racing a storm, he happens upon the very woman he wants to avoid. To his astonishment, she is holding a baby whose name and parentage are unknown.

Elizabeth Bennet never dreamed she had wandered into Pemberley’s Woods on her afternoon walk. But when she finds an infant alone in the storm, she turns to the last man in the world she wants to see ̶ and the only one who can help them both.

As the mystery of the baby’s identity intensifies, Elizabeth finds Mr. Darcy to be quite the reverse of what she expected. But when the child’s family is discovered, will the truth bring them together, or tear them apart? 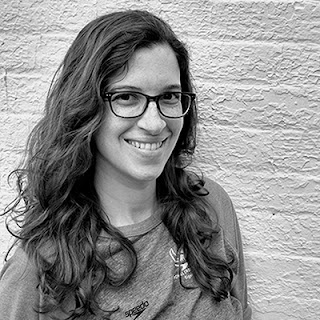 Brigid has been in love with Jane Austen since first seeing the BBC version of Pride and Prejudice as a young girl. She lives in Ohio with her husband and two kids, and spends her free time reading and writing. This is her first Pride and Prejudice variation, though many others live in her imagination.

It's giveaway time! Meryton Press is giving away 8 eBooks of Brigid Huey’s A Chance Encounter in Pemberley Woods. Enter the giveaway through the Rafflecopter below. Good luck! 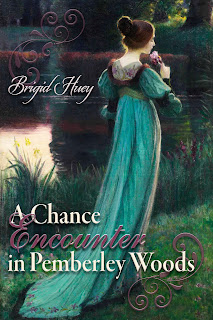 
Many thanks to Meryton Press and Janet Taylor @ More Agreeably Engaged for organizing this blog tour and inviting me along! :)

Congratulations to Brigid on her debut novella, A Chance Encounter in Pemberley Woods! It has been a pleasure hosting you, Brigid!

So, friends, what did you think? Are you as curious as me to find out what Elizabeth is doing there in the woods with a baby no less!
Posted by Candy @ So little time... at 12:30 AM 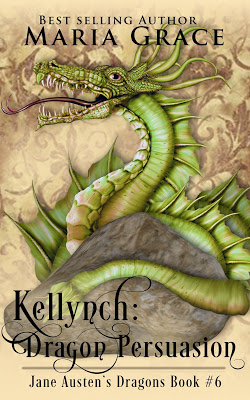