Hello, my friends! Today, as part of the Death of a Clergyman Blog Tour, Riana Everly as stopping by with a lovely interview with Alexander Lyons! There is also an excerpt and a chance to win an e-copy of Death of a Clergyman!
I don't know about you, but I've been getting more and more into mysteries. I'm looking forward to reading this!

An Interview with Alexander Lyons

We love our favourite characters from Jane Austen and love seeing them in new and different situations, and Death of a Clergyman is no different. Here, awkward and pedantic Mary Bennet finds herself thrust into centre stage when it seems she is the only one who can save Lizzy from being accused of murder! But even quiet and observant Mary can’t do it all alone. Luckily Mr. Darcy has brought an investigator along from London to acquit Lizzy of this awful charge. 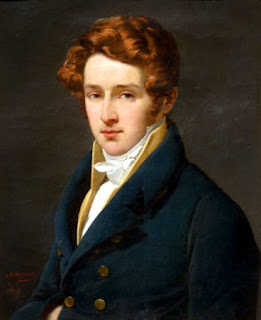 But who is this investigator? May I introduce Alexander Lyons.

Riana Everly: Thanks for joining us today, Mr Lyons. Why don’t you tell us a little about yourself?

Alexander Lyons: Och, there is not much to say out of the ordinary. Sorry – I hope my Scottish accent is not too strong. I fear most people understand me well enough, but do not hide their scorn at my low origins.

RE: No, no, that’s not a problem at all. Some of us find a Scottish accent rather, er, appealing.

AL: Aye then, glad to hear it. Well, as you’ve by now surmised, I am from Scotland – a small town not too far from Glasgow, to be precise. My father was the town doctor and the local laird was generous enough to send me to university when I came of age.

RE: One can study Investigating at university? How did you become an investigator?

AL: Would that not be an amusing course of study? Nae, one must take another degree other than investigating. In my case, I studied the law. When I moved to London to make my way in the world, I was called upon to investigate a situation in the course of my clerkship, and found I was quite successful at it. As more people came to me for help, so I decided to set myself up in that career.

RE: And is that how you met Mr. Darcy?

AL: Just so. He came to employ me just this last summer when his sister disappeared. I have little time for the toffs, as much as they keep me in business, but Darcy has some intelligence to him, and we became – dare I even think it? – friends. You can discover this adventure in a novella called The Mystery of the Missing Heiress. But we are not here to talk about that.

RE: I really want to hear about your involvement in this particular case, with Miss Elizabeth Bennet.

AL: Mr. Darcy arrived at my office one day to inform me that his aunt’s parson had been murdered. I thought, at first, he wished for me to help his aunt by proving that the woman accused, Miss Bennet, was guilty. But He surprised me by asking me to prove her innocent. I suspect he harbours affection for the young lady.

Why do you not join me as we travel to Meryton, there to discover what can be learned about the murder of Mr. Collins? I am certain there shall be a great deal of adventure to be had as we investigate the Death of a Clergyman.

Alexander Lyons wrinkled his nose in a grudging fondness for the area he claimed for both home and business. His small office, above a respectable chandler’s shop, sat in good company, with a solicitor to one side and a young bookbinder in the brightly lit rooms to the other. His living quarters were on the storey above, directly atop his office; and the bakery at the corner where the alley met the street provided inexpensive and tasty victuals. He smiled at the thought of Mr. Jacob’s leek and cheese pies. More importantly, the area provided its own amusements when there were limited funds for a night at the theatre, and he was conveniently situated for any gentlemen requiring his particular set of skills.

Deciding there was to be no more business conducted this day, he set about tidying his office before retiring up to his rooms. He swept the floors, straightened the two chairs that sat across the desk from his own, and ensured an adequate supply of tapers and firewood for the following day, and at last, perused his supply of pens and ink. Satisfied, he left one new quill lying across the pad of paper on his desk, right by the short stack of cards bearing his name and occupation: Alexander Lyons, Investigator.

He was about to draw the curtains and snuff the oil lamp when the sound of heavy feet resounded in the stairwell outside his office. It was too late for business, surely, but he stood motionless for a moment, waiting to hear where the steps would ultimately go. To some surprise, he heard the footsteps stop right at his door, and then with a knock and a tentative rattle, the visitor pushed open the door and stepped inside.

“Mr. Darcy!” This was a surprise indeed! “I am honoured by your presence, but what can I do for you?” He took a good look at his visitor, an automatic action borne of the necessities of his trade. What he saw alarmed him. The man looked upset, more rattled even than when he had first employed Alexander the previous summer to find his lost sister. Whatever could have happened?

“Lyons,” the visitor greeted him politely. Not even the most dire of circumstances could remove the deeply entrenched manners that every gentleman carried before him as his calling card in society. “How have you kept? You are well, I hope. You look well. Your mother? Your sisters? Please pass along my regards the next time you write. And please, no need for titles. We are friends, I hope. ‘Darcy’ will do well.”

Alexander regarded the tall man before him. What had begun as a business relationship had deepened into something that approached friendship during their weeks working together, first to find Miss Darcy after those rumours originated about some affair, and afterwards to determine the habitual haunts of her erstwhile lover, George Wickham. Their mutual regard, born of similar tastes and a deep respect for the other’s understanding and character, had never quite blossomed into a true friendship, for the chasm of societal and economic differences was too great between them: Alexander was a working man from a middle class family in the valleys near Glasgow, whilst Darcy was a gentleman of the highest ranks, almost aristocracy, with an income to match his status. Nevertheless, Alexander was most pleased to see Darcy once more and welcomed the chance to work for him again, should that be the man’s intention.

“Do sit, Darcy. Thank you, we are all well, and I shall pass along your regards. What news of Miss Darcy? Is she recovered from her adventures? She was a brave young lady to write to you as she did, in opposition to Wickham’s expressed commands. I wish her only the best. But sir, you did not come here to discuss my sisters, nor yours. I see on your face that you have received news that alarms you. How may I help?” He took his own chair and turned up the flame in his lamp once more, so the room was filled with enough light by which to conduct business.

Darcy took his seat and leaned forward, elbows on the desk, then straightened his back and ran weary fingers through his hair, before returning to his initial pose, chin resting on one fist. He expelled a heavy sigh and then spoke. “I need you to solve a murder,” he stated. 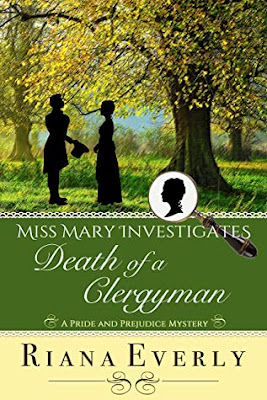 Death of a Clergyman
by Riana Everly
Mary Bennet has always been the quiet sister, the studious and contemplative middle child in a busy family of five. She is not interested in balls and parties, and is only slightly bothered by the arrival of the distant cousin who will one day inherit her father’s estate. But then Mr. Collins is found dead, and Mary’s beloved sister Elizabeth is accused of his murder. Mary knows she must learn whatever she can to prove Elizabeth innocent of this most horrible crime, or her sister might be hanged as a murderess!
Alexander Lyons has made a pleasant life for himself in London, far from his home village in Scotland. He investigates missing documents and unfaithful wives, and earns an honest living. Then one day Mr. Darcy walks into his office, begging him to investigate the murder of Mr. Collins and to prove Elizabeth innocent of the crime. It seems like a straightforward enough case, but Alexander did not count on meeting a rather annoying young woman who seems to be in his way at every turn: Mary Bennet.
As the case grows more and more complicated, Mary and Alexander cannot stop arguing, and discover that each brings new insight into the case. But as they get close to some answers, will they survive the plans of an evildoer in the midst of quiet Meryton?
Buy: Amazon • Universal Links
Add to Goodreads
FTC Disclaimer: Link to Amazon. I am an Amazon Associate. Should you purchase a copy of the book through the link provided, I will receive a small commission. Thanks!
About the Author
Riana Everly was born in South Africa, but has called Canada home since she was eight years old. She has a Master’s degree in Medieval Studies and is trained as a classical musician, specialising in Baroque and early Classical music. She first encountered Jane Austen when her father handed her a copy of Emma at age 11, and has never looked back.
Riana now lives in Toronto with her family. When she is not writing, she can often be found playing string quartets with friends, biking around the beautiful province of Ontario with her husband, trying to improve her photography, thinking about what to make for dinner, and, of course, reading!
Connect with Riana Everly
Facebook • Website • Amazon
* * * GIVEAWAY * * *
Riana Everly is giving away one eBook to one lucky blog visitor today. To enter, just leave a comment on the post and she will randomly select a winner five days after this blog is posted. Riana will contact the winner and email the book directly, so there are no concerns about not being able to receive Amazon gift copies, which sometimes happens.
Please leave an email in the comments so Riana is able to contact you! Remember to put parentheses around (at) and (dot)! Thanks! 😃
Good luck!! 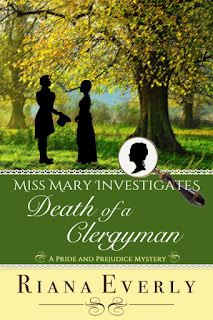 Many thanks to Riana Everly for stopping by here today and for offering one of my readers an eBook of her new book, Death of a Clergyman!
Posted by Candy @ So little time... at 12:30 AM