Review: Persuade Me By Juliet Archer 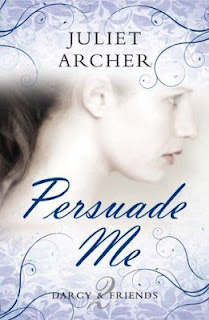 Loved it!! Persuade Me is an excellent modernization of Persuasion. Ms. Archer was able to bring it into the modern age without any major changes to the basic storyline.

Rick is returning to the UK, to promote his new book, Sex in the Sea. Anna Elliot has a ticket to his book signing, but would she go? Ten years ago, after a summer in love, Anne left him and returned home to finish her schooling. Persuaded by her father and godmother to fulfill her mother’s dream for Anna to get a degree in Russian Literature at Oxford. Rick was furious and they never spoke again. She has always regretted it.

“Never forgive, never forget” are words Rick tries to live by and he has never forgiven Anna. With his sister, Sophie, staying near Kellynch, the manor owned by the Elliots, Rick knows he will probably see Anna again. All of his good intentions of proving to himself he is over her are put to the test after the first time he sees her, and it only gets harder with every meeting.

You could feel the bitterness Rick still felt over Anna leaving him, and with a few stinging comments he lets Anna know it. Poor Anna! What I like about Anna is she is always nice, even when she is put in situations that are unpleasant for her. Not only is it torturous to be around Rick and Lou, but she receives many text messages from Mona (Mary Musgrove) with updates on how things between Rick and Lou are progressing.

In this modern age, when letter writing is becoming a lost art, Rick writes Anna a swoon worthy letter! You can’t have a Persuasion story without The Letter, and Ms. Archer did not let me down!

You know your into a good book when you’re up way too late reading and when you finally do go to bed you can’t sleep! Well, this was that book for me! It was so good! I would highly recommend it!

I purchased my own copy of Persuade Me.