Hey Everyone! I'm pretty excited about being part of the Boots & Backpacks Blog Tour! Sounds like a fantastic book, and after reading the book blurb and the excerpt below, I can't wait to get my hands on at copy! I won't have to wait long as it's due to be released November 1, 2014!! Woot! Make sure to add it to your goodreads shelf!

Meryton Press is also giving away an e-copy of Boots & Backpacks by KC Kahler here on my blog! You'll find that information at the bottom of this page. 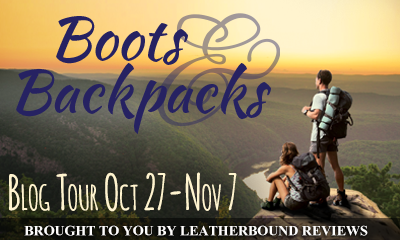 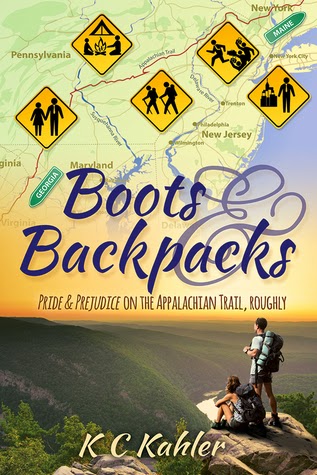 Boots & Backpacks
Pride and Prejudice on the Appalachian Trail, roughly

William Darcy counts down the last few months to his 30th birthday with dread. Orphaned as a child, his parents’ will includes a bizarre clause: Darcy must get married by his 30th birthday in order to inherit the family fortune. To make matters worse, the press knows about this deadline, as do the hordes of women chasing him in the hopes of becoming Mrs. Darcy. His family legacy hangs in the balance, but Darcy has little faith in the fairer sex. Will he find a woman he wants to marry, and quickly?

Elizabeth Bennet is determined to pursue her education and career without letting a man get in the way. When her traveling companion drops out, her planned hike on the Appalachian Trail is jeopardized. She meets the spoiled, snobby William Darcy just when he is desperate to escape the spotlight. No one will suspect that the Prince of Manhattan has gone backpacking! Darcy and Elizabeth form a tenuous partnership and begin a 300-mile journey that will transform them both.

In classic romantic comedy tradition, Boots & Backpacks follows our reluctant partners as they build trust, friendship, and even more. Six weeks together on America’s most famous hiking trail may turn out to be just what these two need!

Boots and Backpacks by KC Kahler

Notes: This is the scene from Chapter 1 where Darcy meets Elizabeth for the first time. Fair warning: he’s pretty unlikeable at the start of the story. I’ve previously posted the Prologue at my blog, where we get a glimpse of reformed Darcy. But here he is at his worst:

William Darcy was bored. Watching the Hursts get carpal tunnel syndrome wasn’t his ideal way to spend a Friday evening. But here he was, watching through the window into the next room as they closed on their new house.
Louisa and Langdon Hurst, who were expecting their second bundle of joy (their first kid was a bundle of something), had got it into their heads to move out of the city. After doing some research—namely sorting community census data by highest average household income—they had narrowed their search to northern Bergen County, New Jersey.
Caroline Bingley thought her sister crazy to be moving out of Manhattan, and Darcy had to agree. But Charles Bingley was, as ever, supportive of his older sister’s plans, even accompanying the Hursts the first time they met with a real estate agent. He then went along to see all 19 of the houses they viewed because he was enamored with “angelic” real estate agent, Jane Bennet. Apart from their house-hunting excursions, Bingley and Jane Bennet had gone on several dates, and Darcy had been subjected to his friend’s gushing about this paragon of womanhood to a nauseating degree. He wanted to see who had captured Bingley’s interest—a significant feat, since Bingley’s reputation as a playboy was second only to Darcy’s. Thus Darcy found himself in a real estate office in Ridgewood, NJ.
At the moment, Bingley was making googly eyes through the glass wall at Miss Angel as she sat at a table with her clients. She was beautiful, Darcy had to admit, though in a wholesome sort of way. She was also helpful and earnest, pointing out to her clients where to sign each form, all in triplicate. Darcy saw Langdon flex his hand in between signatures.

And it goes downhill from there. :)


Ooh! I'm so looking forward to reading Boots & Backpacks! Thank you, KC Kahler, for sharing this excerpt with us!

KC Kahler has worked as a writer and editor in both non-profit and academic settings. Until discovering Jane Austen Fan Fiction several years ago, KC’s writing had been limited to the dry and technical, which is a shame, since she considers herself witty and sparkling. Her first novel, Boots & Backpacks, will be published in 2014 by Meryton Press.

KC lives on a four-acre slice of Penn’s Woods with her husband and two dogs. They enjoy hiking, gardening, and being beer snobs.

Meryton Press is giving away one (1) e-copy (Kindle or Nook) of Boots & Backpacks to one lucky person! Fill out the Rafflecopter below to enter.


Please, leave a comment! We'd love to hear from you! Remember to enter the giveaway you MUST fill out the Rafflecopter (shown above). Please don't leave your email in the comments. If you need any help entering, email me! Just click on the icon at the top of the sidebar. Thanks!

Boots & Backpacks is now on sale at Amazon!

FTC Disclaimer: Link to Amazon. I'm an Amazon Associate, and if you should purchase a copy of the book through the link provided, I will receive a small commission. Thanks!
Posted by Candy @ So little time... at 12:30 AM