Hello, my friends! I’m so thrilled to be part of the Promised Blog Tour! This story sounds amazing, and isn’t that cover gorgeous! Below is a lovely excerpt for you to read. I hope you enjoy it! 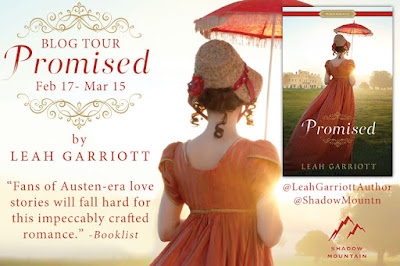 “Garriott’s impressive debut distinguishes itself with its expertly evoked Regency setting, a cast of realistically flawed yet eminently relatable characters, and a sweetly satisfying love story. Teen fans of Austen-era love stories will fall hard for this impeccably crafted romance.”—Booklist

“Promised is a sweet regency romance and one that I recommend to all of you romance fans, especially those of you that enjoy stories inspired by Jane Austen.”—The Book Diva’s Reads

“…a fun, entertaining, and perfect addition to the Proper Romance collection.”—The Readathon

“With an Austen-like focus on minute emotional detail and some amusing secondary characters, Garriott’s gentle novel promises a treat for Regency fans who like their characters well-bred, their interiors comfortable, and the romance no racier than the hero turning up in a wet shirt.”—Historical Novel Society 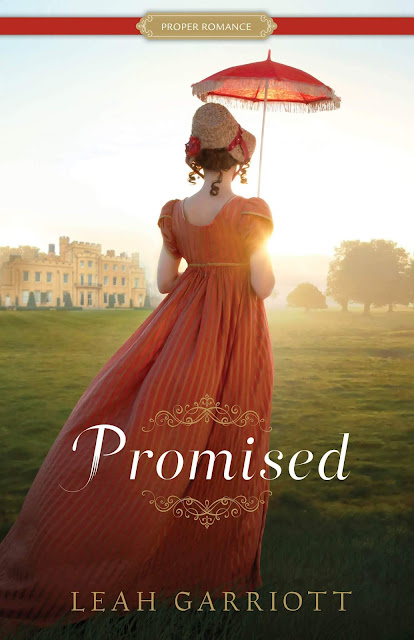 Margaret Brinton keeps her promises, and the one she is most determined to keep is the promise to protect her heart.

Fooled by love once before, Margaret vows never to be played the fool again. To keep her vow, she attends a notorious matchmaking party intent on securing the perfect marital match: a union of convenience to someone who could never affect her heart. She discovers a man who exceeds all her hopes in the handsome and obliging rake Mr. Northam.

There’s only one problem. His meddling cousin, Lord Williams, won’t leave Margaret alone. Condescending and high-handed, Lord Williams lectures and insults her. When she refuses to give heed to his counsel, he single-handedly ruins Margaret’s chances for making a good match—to his cousin or anyone else. With no reason to remain at the party, Margaret returns home to discover her father has promised her hand in marriage—to Lord Williams

Under no condition will Margaret consent to marrying such an odious man. Yet as Lord Williams inserts himself into her everyday life, interrupting her family games and following her on morning walks, winning the good opinion of her siblings and proving himself intelligent and even kind, Margaret is forced to realize that Lord Williams is exactly the type of man she’d hoped to marry before she’d learned how much love hurt. When paths diverge and her time with Lord Williams ends, Margaret is faced with her ultimate choice: keep the promises that protect her or break free of them for one more chance at love. Either way, she fears her heart will lose.

Before we had walked far, the sight of horses approaching from the direction of Rosden drove us to the side of the road. A carriage much finer than our own, with a coachman and two footmen in livery, slowed to a stop next to us.
I scarcely had time to note that its coat of arms indicated the carriage belonged to one of the aristocracy before a footman with a rather long nose stepped down. “Pardon me, miss, sir. His lordship means to inquire if you are in need of assistance.”
Daniel moved forward, but I placed my hand on his arm to stop him. Peers of the realm did not stop to offer assistance to strangers. While Daniel might not have much to fear from the encounter, the idea of being in an unfamiliar carriage with an unknown aristocrat was not a comfortable thought for me.
Daniel glanced at me. “Please thank his lordship for the inquiry, but we are enjoying a stroll to Rosden.”
“His lordship would ask you to allow him to convey you to your destination.”
My grip tightened on Daniel’s arm. Why was this man being so persistent?
Daniel shook his head. “Again, we thank his lordship, but my sister is quite intent on walking.”
“You do not wish to be conveyed in his lordship’s carriage?” The footman lifted his chin and peered down his nose at us. It was impossible that he could still see us when he assumed that stance. His nose had to get in the way of his vision.
The handle to the carriage door turned and the footman scrambled to grasp it. I stifled a gasp as Lord Williams stepped out.
With such a condescending footman, I should have known.
Daniel bowed, jostling me, and I bobbed a stiff curtsy before meeting Lord Williams’s icy blue glare with one of my own.
“It would be my honor to assist you,” Lord Williams said with a slight bow. His words were clipped, his tone formal. I could only imagine how annoying it must be for him to lower himself by offering us assistance.
“No, thank you.” The sharpness in Daniel’s response was gratifying. “We would not wish to inconvenience you.”
“I assure you it would be no inconvenience at all.” Even as he spoke the words, the baron rolled his shoulders back as though steeling himself against the probability of having commoners in his carriage.
Arrogant man. All three of us would have been much better off if he had refrained from stopping.
The sound of wheels approaching from the other direction turned my attention. An empty hay wagon had maneuvered around our broken carriage and rumbled toward us.
“Daniel, this man appears to be traveling toward Rosden. Perhaps he will be so good as to provide us with transport so that we need not impose upon his lordship.”
The driver pulled to a stop. “Is one of you needin’ a lift? The coachman down the way indicated you might.”
Daniel stepped forward. “My sister and I need to catch a stage in Rosden. Would you mind greatly?”
The driver glanced at me. “My wagon ain’t fittin’ for a lady.”
“Oh, I am not afraid of a bit of straw,” I replied.
Lord Williams stepped forward. “You should not ride in a dirty hay cart when there is a carriage at your disposal.”
Given his rudeness at the Hickmores’, I should not have been surprised that he was so impertinent as to tell me what I should and should not do. His eyes narrowed at the driver and his lips pulled into a frown, as though his disapproval alone could send the driver on his way.
Struggling to hide my indignation, I said, “There is no place to turn your carriage, my lord, and that dirty hay cart is headed in the direction we need to go. If, however, you are intent on rendering your services, perhaps you would be so kind as to provide our coachman with conveyance to Welborough. We would certainly be in your debt.”
Without waiting for a response, I walked to the back of the wagon. “Daniel?”
Daniel frowned and glanced between me, the baron, and the driver. I tapped my toe to urge him to hurry, but suddenly the baron was beside me. “At least allow me to assist you into the cart.”
I jerked away from him. “No! I mean, no, thank you. I am able to manage for myself.”
His lips thinned and he stepped back. I turned my attention to the wagon. Its bed was as high as my thighs and there was no step attached, eliminating any means of easy access. I cursed Daniel’s slowness, knowing I would look foolish insisting on his help after the baron had offered. 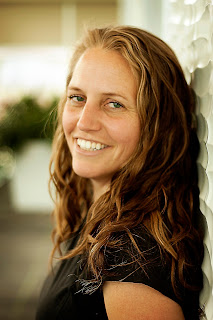 Though she earned degrees in math and statistics, Leah Garriott lives for a good love story. She’s resided in Hawaii and Italy, walked the countryside of England, and owns every mainstream movie version of Pride and Prejudice. She’s currently living her own happily ever after in Utah with her husband and three kids. Leah is represented by Sharon Pelletier at Dystel, Goderich, and Bourret.


Many thanks to Laurel Ann Nattress of Austenprose for organizing and inviting me on this blog tour!


I hope you enjoyed the excerpt as much as I did! Hmmm...... Lord Williams reminds me of someone, and Margaret sounds a bit obstinate, doesn’t she? :)
I’m looking forward to reading Promised!
Posted by Candy @ So little time... at 12:30 AM