Hello, my friends! I'm so happy to have Belén Paccagnella back again for a visit! I'm excited about her new book When Duty Calls because I love it when Darcy and Elizabeth are forced to be together! 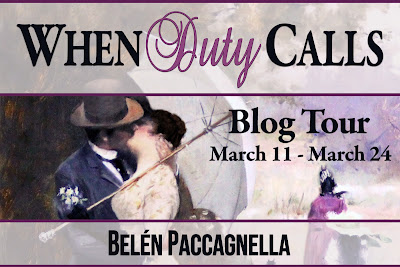 Thank you, Candy, for receiving me once again here at So Little Time... It’s always a pleasure to be part of your blog and share this experience with your readers.

As I said in my first blog tour, my love for all things Austen began in the early 2000s, after watching the 1995 BBC miniseries. Of course, the next thing I did was to buy the novel, and after reading it in Spanish (not very fond of that translation, I must confess), I searched the local libraries for an English version that wasn’t toned down for scholars. Reading the book wasn’t easy for me, believe me, I had to check a dictionary at least twice every paragraph to understand the words and catch Miss Austen’s meaning. Then, thanks to my sister, who told me of a fanfic site she found (I never imagined these things existed), a whole new world opened up for me. When I devoured all the stories there, I started searching for more sites that would satisfy my craving for more Elizabeth and Mr. Darcy.

Like many other readers, I find those stories in which Darcy and Elizabeth are brought together against their will extremely appealing. Whether it is an accident that threw them together into a cave or some tragedy at Longbourn that forces Elizabeth to reconsider and grudgingly accept Darcy’s proposal, I am a goner when it comes to our dear couple dealing with their issues face to face and not separately as it happens in the original novel. So, one Sunday afternoon, bored to death with a TV show, I imagined this little scene at Pemberley, in which the Darcys have been married for a couple of months, but the union has not been consummated yet. In this scene, I selected for your blog my first ever attempt at writing: our dear couple is already in love, having already transited that glorious phase in which most misunderstandings had been cleared. However, they have yet to talk about them and are unsure of how to approach each other for fear of being rejected.  Thus, this ‘forced marriage’ story was born. From then on, I couldn’t stop. The feedback I received from the readers was positive —despite my idiomatic limitations at the time— and encouraged me to write more. I still wanted to stay true to canon, but I knew certain scenes were not going to happen if I didn’t follow the original storyline. So, I adapted them to fit the new plot. How could I keep out the magnificent argument between Lady Catherine and Elizabeth if the wedding already happened? How can Elizabeth refuse Darcy’s proposal if she’s already married to him? Well, you’ll have to read it to find out!

Forced marriage stories had been written over and over again during the past two decades. I hope When Duty Calls still manages to surprise the readers. 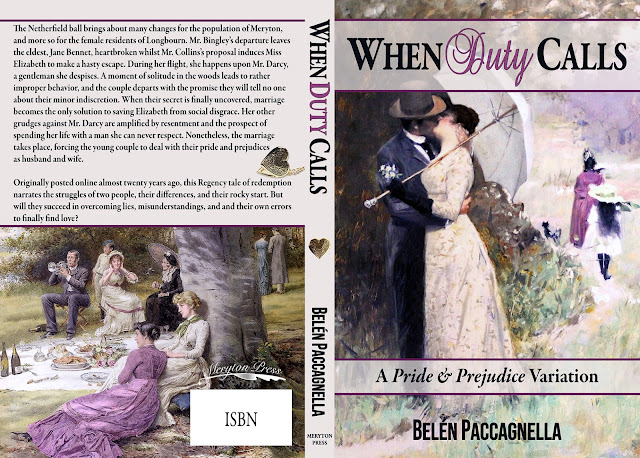 
The picnic Mr. Darcy had suggested the night before took place by the trout stream situated beyond the grove, a short distance from the house. The Gardiner children were excited about spending a day in the park, as were the gentlemen—Mr. Gardiner in particular, given his fondness for fishing. The gentlemen, together with Miss Darcy and the children, lead the way soon after breakfast while Elizabeth and Mrs. Gardiner joined them some time later, followed by a line of servants carrying baskets filled with food and drink. As they approached the site, Elizabeth and her aunt were met with excited laughter from those already gathered.

“They must be enjoying themselves very much from what we can hear,” Mrs. Gardiner told her niece as they made their way down the slope.

“Indeed! They seem to be greatly entertained!” Elizabeth replied with enthusiasm.

“I dare not imagine what they are doing to make such—”

Mrs. Gardiner’s speech was interrupted by the sound of a great splash, a clear indication that someone had fallen into the water. Screams of alarm were soon followed by giggles from the children as well as Mr. Gardiner’s resounding laughter. With expressions ranging from concern to amusement, the ladies picked up their skirts and hurried to the stream to see what commotion had inspired such merriment. They arrived in time to see a completely drenched Mr. Darcy emerging from the water.

“Dear Lord!” cried Mrs. Gardiner, almost losing her countenance. Next to her, a line of startled servants observed the scene with wide eyes.

Mr. Gardiner extended his hand to assist Mr. Darcy from the water. Even the timid Georgiana was laughing at the sight of her dignified brother in such an unbefitting state. Too stunned to move, Elizabeth observed her grinning husband as he stepped onto firm ground and shook the water from his hair. It was a most unusual sight, and it took her a moment to overcome her surprise.

“Good heavens! What happened?” she enquired after finding her voice.

“I was trying to fetch something for Matthew, and I fell into the water,” replied Mr. Darcy to his amused audience.

Elizabeth could not entertain the idea of Mr. Darcy falling into a pond simply because of a five-year-old child. Regaining her famous wit, she countered, “And what is this ‘something’ you were trying to fetch that led to your unexpected union with the water?”

“Perhaps it is better that I show you,” Mr. Darcy said as he walked towards his wife with one hand behind his back and a devilish smile on his face. Behind him, Matthew covered his giggles with both hands.

Elizabeth contrived to formulate a response with all the self-assurance she could muster, which was little, given the absurdity of their current situation. But the gentleman was already standing before her, water dripping from his hair and clothes, his eyes shining with mischief.

“This,” he declared as he presented her with a frog not two inches from her nose.

Elizabeth screamed at the sight of the fat, greenish, and decidedly horrible creature and jumped back in horror. The rest of the party erupted into laughter. Even the servants tried to hide their mirth, but their bemused smiles betrayed them.

“Mr. Darcy! How could you!” she cried, placing her hand on her beating heart. “You—”

Elizabeth’s efforts to chastise her husband were cut short when Mr. Darcy took hold of her chin with his free hand. Her eyes opened wide when he gently pressed his fingers into her cheeks forcing a pout to her lips. There he planted a firm, noisy kiss, much to Elizabeth’s—and everyone’s—surprise.

With his gaze fixed on hers, Mr. Darcy eased his hold on her chin, his smug smile never wavering, challenging her to say something else. Elizabeth looked at him in astonished silence, still trying to overcome the shock of being kissed by her husband so unexpectedly and in front of such a large audience.

“Now, if you will excuse me, madam”—Mr. Darcy’s bow was all politeness—“I shall make myself presentable for lunch.”

He then handed the frog to Matthew and marched towards the house. Elizabeth stood perplexed while the rest of the party observed her with amused grins on their faces.

“That, my dear,” said Mr. Gardiner to his wife, highly diverted by the whole occurrence, “is a jolly good way to silence a woman.”

The picnic progressed as planned once Mr. Darcy returned in dry clothes. Everyone enjoyed the day thoroughly, although, for Elizabeth, perhaps not as much since the kiss her husband bestowed earlier in the day had driven her into a state of troubled muteness. Her attitude should not be mistaken as displeasure for Mr. Darcy’s advances, however. On the contrary, she was more than happy he had taken such an enormous and completely unexpected liberty. However, she could not help but fret about what may come afterwards. Was it proof that past grudges had been overcome and they were now on the path towards a loving marriage? Would Mr. Darcy come to her bedroom and finally consummate their union?

The mere thought of having Mr. Darcy in her bed made Elizabeth bashful and fidgety. She sat in agitated silence, meditating on what the future might bring, her heart aflutter and her mind wild with images and sensations that she had not felt since her engagement when she was given a brief but ardent sample of intimacy between a husband and wife.

No matter how unsettling these thoughts were, after so many weeks of admiring Mr. Darcy from afar, Elizabeth felt her efforts were finally rewarded. She had kissed him; he had returned her affections. Their intentions and expectations, albeit not voiced directly, had been tacitly expressed and acknowledged by each other. To settle matters between them, the only thing left was to admit their true and deepest feelings. 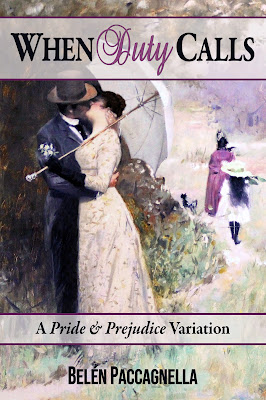 When Duty Calls
by Belén Paccagnella

The Netherfield ball brings about many changes for the population of Meryton, and more so for the female residents of Longbourn. Mr. Bingley’s departure leaves the eldest, Jane Bennet, heartbroken whilst Mr. Collins’s proposal induces Miss Elizabeth to make a hasty escape. During her flight, she happens upon Mr. Darcy, a gentleman she despises. A moment of solitude in the woods leads to rather improper behavior, and the couple departs with the promise they will tell no one about their minor indiscretion. When their secret is finally uncovered, marriage becomes the only solution to saving Elizabeth from social disgrace. Her other grudges against Mr. Darcy are amplified by resentment and the prospect of spending her life with a man she can never respect. Nonetheless, the marriage takes place, forcing the young couple to deal with their pride and prejudices as husband and wife.

Originally posted online almost twenty years ago, this Regency tale of redemption narrates the struggles of two people, their differences, and their rocky start. But will they succeed in overcoming lies, misunderstandings, and their own errors to finally find love? 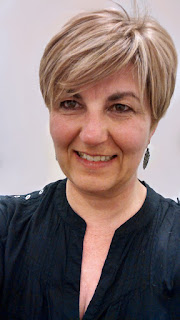 Born in Buenos Aires, Argentina, Belén Paccagnella discovered the world of Jane Austen fan fiction after watching the 1995 BBC miniseries of Pride and Prejudice. In her teens, she lived in Brazil when her family moved to the city of Curitiba due to her father’s work. She moved back to Buenos Aires a few years later, where she studied agronomy but finally pursued a different career and started working in the development and administration of shopping centers.

In 2001, she began writing both Regency and modern stories, adapting the Pride and Prejudice storyline to different backdrops, merging drama, humor, and adventure while creating characters with unique traits. Almost two decades later, she published Obstacles, a modern variation released in 2018 by Meryton Press.


Belén still lives in the suburbs of Buenos Aires where she shares her home with her pets while spending her time working, reading, and writing.

It's giveaway time! Meryton Press is generously giving away 8 eBooks of When Duty Calls! Enter through the Rafflecopter below. Open Internationally! 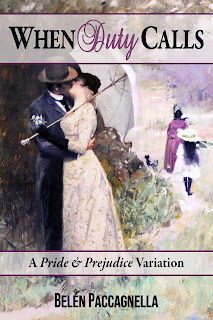 Many thanks to Belén for being here today! It's always a pleasure to have you!

Also, a big thanks to Janet Taylor @ More Agreeably Engaged for organizing and including me in this blog tour!

So, friends, what did you think of that excerpt? What are your thoughts about forcing Darcy and Elizabeth together? And as always, please feel free to leave any comments or questions for Belén below!
Posted by Candy @ So little time... at 12:30 AM