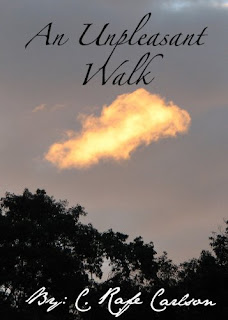 An Unpleasant Walk is a Pride and Prejudice variation that begins at Hunsford. While walking on one of her favorite paths, Elizabeth encounters Colonel Fitzwilliam. Things turn ugly when the Colonel suddenly pins her to a tree and attacks her. He tells her she will become his mistress and he will come to her later that night to make her his. Darcy finds her bruised and upset as she is making her way back to the parsonage. After learning the truth, he vows to help her. He forms a plan to get her to London without anyone finding out what happened and before the Colonel can come back to finish what he started.

I really like the idea of this story. I wasn't happy about Colonel Fitzwilliam being a scoundrel of the worst kind, but I thought I could get over it and love Darcy being a hero and saving Elizabeth. But most of the time her recovery is with the Gardiners. It seems to take her a long time to recover.

I did like how before getting to London, Darcy and Elizabeth were able to talk and clear the air about Jane and Bingley, and Mr. Wickham. Her shock in learning the truth about Wickham, and Colonel Fitzwilliam’s behavior makes her question her ability to judge people’s true character. Darcy is so patient and kind to Elizabeth with how he handles himself around her, especially right after the attack when she startles easily.

One of my favorite characters in this story is Mrs. Higham, the widow of the previous parson. Knowing the need to have a chaperone, Mr. Darcy asked Mrs. Higham to accompany them back to London. She is instrumental in explaining the situation to Mr. and Mrs. Gardiner and on occasion, counseling Mrs. Gardiner about Lizzy’s condition.

For me, there was just too much sadness in this story; it took too long to resolve. Elizabeth is not the strong woman who is able to reason out what happens to her and jump back quickly. It does end well and I enjoyed that. But overall it's not one that I would read again.

I purchased my own copy of the book.

Buy a copy of An Unpleasant Walk  here.