The Spinster’s Vow By Enid Wilson 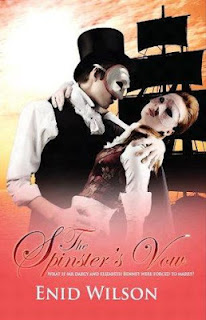 This is one of the books I won in February from Coffee Times Romance. I wasn’t sure how I would like it but the book description sounded good so I gave it a try. After a rough start, I enjoyed the story very much.
The beginning was not my cup of tea. I thought it was unrealistic, but I pushed through it and I’m glad I did! I’m sure if you are in anyway a purist you might not enjoy the story, but I’m not, so I just let it take me away without worrying about the logistics.
It’s been six years since Mr. Bennet suddenly disappeared. After leasing out Longbourn, the Bennet women are now living in Broadstairs of Kent. The girls have been invited to a masquerade ball for single men and women only. The ball put on by the militia is being held to encourage the young people to get to know each other, marry and have children, to replace the men that were lost during the war. At the ball they are served wine that has been infused with herbs that make people lose their inhibitions, in hopes to make them marry quicker.
Elizabeth and Darcy meet at the ball, and after he insults her he is drawn to her and won’t leave her side. They end up in a compromising position and get married. With her father’s disappearance Elizabeth is afraid to give her heart away. She has also broken her vow never to marry but she realizes marrying Darcy will help her family since her father will be declared legally dead in another year and they will lose Longbourn. Darcy offers to help in the search, with his resources and connections, will they find out what happen to Mr. Bennet? Will they also find love along the way?
There are a few twists and turns along the way and a few dead ends in their search. There are also a few people objecting to their marriage, causing trouble. Wilson puts a different spin on Wickham and makes him a long lost relative of Mr. Bennet and the heir to Longbourn.
Overall, I enjoy the story and I’m glad I read it!
I give this a 4 out of 5 stars.
I would rate this mature for some sexual scene.