Take a Chance On Me by Jennifer Dawson ~ My Review 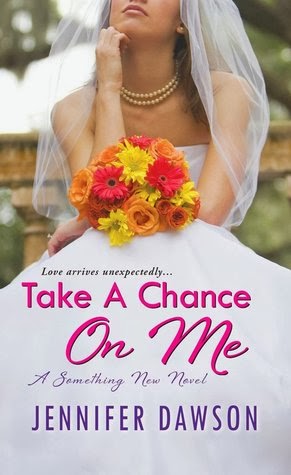 Take a Chance On Me  by Jennifer Dawson

I really liked Take a Chance On Me! It’s a fast-paced, humorous, hard-to-put-down read!

At 28, Maddie Donovan has never been on her own. She still lives with her mom, and has been with Steve, her fiancé since she was 15! She has always had her mother, brother, and Steve telling her what to do. On her wedding day, as she is getting ready to walk down the isle, panics sets in, and she makes her escape by climbing out the church window! Several hours later, still in her wedding dress, she finds herself walking down a dark highway in the middle of nowhere.  She heads toward the only thing she can see, a red neon bar sign. She has no idea what she’s going to do, but one thing is for sure...she’s not going back home.

When Maddie walks into his bar, Mitch Riley is very intrigued by her, not to mention she is completely adorable, especially wearing her wedding dress and tiara. She looks like a princess, which is what he calls her. He offers to help, but with her newfound independence, she refuses him. He finally persuades Maddie to let him help her, but it's not easy, and she fights him every step of the way. Being with Maddie makes Mitch feel more alive than he's felt in years.

Maddie is really cute and funny. She is so determined to do this on her own, but with no clothes and no money it is kinda hard to do without some help. Mitch is falling hard for her and tries everything he can think of to convince her to stay, but he also understands her need for freedom. As one day turns into another, the closer they become. Maddie finds she can tell him things she could never tell anyone else, and Mitch also confides in Maddie. He tells her all about how he was a big lawyer in Chicago and how he came to own the bar.

When scandal hits Mitch's family, and someone threatens to take Mitch down with his father. Mitch withdraws from Maddie, and their relationship becomes fragile. Maddie wants to help and enlists the aid of her brothers. But when Mitch finds out he feels betrayed, will he ever forgive her?

I love the small town atmosphere in this story (because, well, it is a small town). Everyone knows each other and news spreads like wildfire! For example, Mitch’s neighbor Gracie brings Maddie some clothes early the next morning before she even meets her because her brother Sam told her about Maddie showing up at the bar the night before. There are NO secrets!

Take a Chance On Me is a great book, and I really enjoyed reading it! There were more than a few times it had me laughing out loud. It's one I would recommend reading.

I would give this story a mature rating for sexual content and strong language.

Disclaimer: I received an e-copy of the book for my honest opinion.