Tree of Life: Charlotte and the Colonel by Ginger Monette ~ Review & GIVEAWAY! 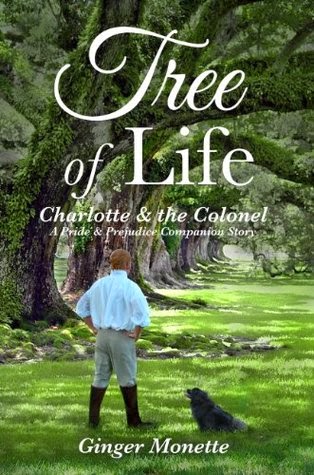 Tree of Life ~ Charlotte & the Colonel by Ginger Monette


"Would loving him always be bittersweet?"

In this, the Colonel and Charlotte knew each other as children. Charlotte’s aunt had married well and was a neighbor and close friend of Lady Matlock, the Colonel’s mother. Charlotte would visit her aunt during the summers, and often the two families would be in each other's company. Charlotte and the Colonel grew to love each other, but as the Colonel needed to marry someone with a large dowry, he knew he could not marry Charlotte. Sadly, he tells her so and encourages her to finds someone else to marry and have the family she wants to have. Eventually, Charlotte does marry. She sees an opportunity to escape spinsterhood and marries Mr. Collins. A decision she would regret.

We go with the Colonel into battle on the Southern Coast of France and again at Waterloo. During one fight, the Colonel is seriously burned in a cannon explosion. Fortunately, there is a good surgeon aboard the ship taking him home. Dr. Scott, who has just come into an inheritance, is retiring from the army and is on his way to London. The Colonel invites Dr. Scott to stay with him while he is in London.  Although the Colonel’s body heals, mentally he spirals into despair. Darcy (yes, Elizabeth and Darcy are in some of the story) and Dr. Scott admonish him, but it’s Scott’s words “sometimes I pray” that turns his life around. Scott and the Colonel become good friends.

Anne de Bourgh is in this story quite a bit. She has learned to trust and focus on God. She and Charlotte become friends. I really liked getting to know this Anne. She’s in the novel quite a bit with a wonderful story of her own. Could there be love in Anne's future?

I found Tree of Life a lovely story about being content in your life and waiting for God’s timing in all things. Anne is content with her life at Rosing and finds peace in forgiving her mother. On the other hand, Charlotte wasn’t content with being a spinster, and rushed into marriage with Mr. Collins.

I also liked how the story touched on honoring your parents. When the Colonel went to his father to ask for his blessing on marrying a woman that would bring nothing to the marriage. His father said no. Now, the Colonel could have married her anyway, but he decided to honor his father’s wishes and wait for God’s timing.

I really liked Tree of Life. It’s a story of faith and enduring love.

Disclaimer: I received an e-copy of the book for my honest review.

Ginger has generously offered to give away ONE copy, paperback (US only) or e-copy (US or International), of her book,
Tree of Life ~ Charlotte & the Colonel
to one lucky winner!
To enter fill out the Rafflecopter below.

Hop over to Austenesque Reviews to read an interview with Ginger and comment there for another chance to win a copy of Tree of Life!

Comments are always welcome! Remember, to enter the giveaway you must fill out the Rafflecopter above! Good luck!
Posted by Candy @ So little time... at 12:30 AM