True to the Highlander by Barbara Longley ~ My Review 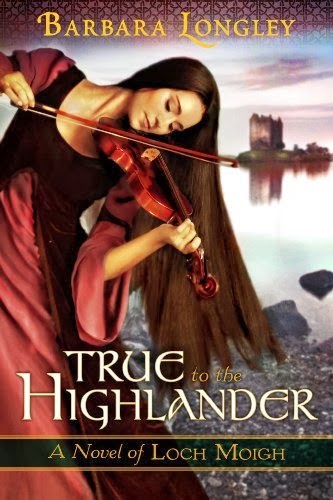 True to the Highlander by Barbara Longley

I loved True to the Highlander! In this time-travel romance, a modern day girl finds herself in the Scottish Highlands during the 15th century!

While working at the Renaissance Festival, Alethia Goodsky knew to keep her distance from Madame Giselle, the fortune teller. The old woman always seemed to be watching her. But when Alethia hears crying coming from the fortune teller's tent, compassion gets the better of her, and she goes to see what's the matter.  The old fortune teller spins a tale about someone that she cares about being in trouble, how Alethia has certain gifts and that she would be able to survive anywhere...Alethia soon finds herself in the Scottish Highlands of 1423, and right in the path of Malcolm MacKintosh.

Malcolm was on his way back to Moigh Hall with a group of his men, when they find Alethia alone, without any guardsmen or servants to protect her. He insists she come along with them, and he scoops her up and puts her on his horse. He is not about to leave her alone in the wilderness, especially with the likes of Hugh in their party. Hugh is not to be trusted. But, Alethia is not going to be taken that easily! She has taken self-defense classes and uses some techniques to free herself, taking Malcolm by surprise! It is pretty hilarious!

Alethia had me laughing with her modern language and independence that baffled and frustrated Malcolm, but he also enjoyed her sharp wit, and he loved to goad her. Soon, she was fitting right in with the MacKintosh clan. Her violin had made the trip with her, and she was able to charm them with her musical abilities. They were also intrigued with the mystery that had brought her to them. With a bit of twisting the truth and “era-blending”, she came up with a story that was believable.

After being in the Highlands for some time, Alethia was becoming torn as to what century she wants to belong to, and a bit nervous because she did not know when or if Madame Giselle would send her back. She was falling in love with Malcolm. Plus, there was Hunter, a little deaf orphan whom she had begun caring for. He had become her ward. She couldn’t leave them behind, but there was her deaf grandmother in the future, who needed her, and all of her dreams. Alethia was to graduate from Juilliard next spring and was to start working soon after in Los Angeles, working for a Hollywood orchestra that made soundtracks for movies.  Either way, she was in for heartache.

I love the Scottish accents and those sneaky Scottish marriage laws! You have to be careful because you’ll end up married before you know it! ;)

True to the Highlander is a humorous, time-travel romance! I seriously can’t wait to read the next book in  The Novels of Loch Moigh series, The Highlander’s Bargain, where Robley, Malcolm’s cousin travels to the 21st century!

Disclaimer: I received an e-copy of the book for my honest review.