A Will of Iron Blog Tour ~ Guest Post & Giveaway!

Hey, Everyone! For my stop on the A Will of Iron Blog Tour, Linda Beutler is here with us today to discuss the interesting topic of Regency Funerals in conjunction with her new book, A Will of Iron! Now, this is one topic I haven't thought much about, but I found it fascinating! 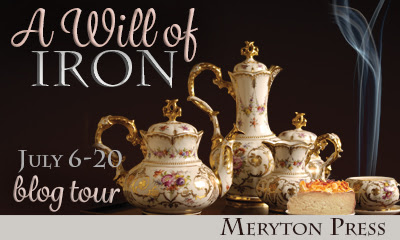 Many thanks to Jakki at Leatherbound Reviews for organizing this Blog Tour!

Also, Meryton Press is giving away a paperback of A Will of Iron to one lucky person! You'll find the information for the giveaway at the bottom of this post.

Thanks so much for the opportunity to guest post! It is always great to have So Little Time... offer to host a stop on a blog tour.

What follows might seem a tad morbid to some, but honestly, my best friend Jacky and I had a great time researching Regency era funeral fashions, customs, and slang for A Will of Iron. You see, there are a lot of deaths in this story, and three funerals (—ending with two weddings! Hmmm…one is a double ceremony. How do we count that, I wonder?). Anyway… thanks to The Regency Encyclopedia and similar sites for making my tale more authentic and stoking me with knowledge to make Lady Catherine de Bourgh reach new heights of pretension.

Rest assured, A Will of Iron is not a mystery. It is a macabre romp. Thanks to Anne de Bourgh’s journals being spirited into the guarding hands of Charlotte and Lizzy, readers learn the truth as Lizzy and Charlotte read the pertinent entries. There are murders here, but also enough foreshadowing to sink a battleship. The main death scene in the story is so weird that I hope it will also be relatively angst free. (There’s an author’s twisted logic for you. Or perhaps, there’s a twisted author’s logic?)

The first death in the story is the most important: Anne de Bourgh. Because she is the heiress to Rosings Park, Anne is first laid out for viewing in the largest, most splendid drawing room. Sadly, is it a warm April, and because Lady Catherine will have none but the Archbishop of Canterbury perform the funeral rites, and he has to preside at a royal event first, Anne must be removed to a cooler location (the basement of the Hunsford Church, where she is protected from rats and what-not by Mr. Collins).

Go ahead and start saying “Ewww!” now, because it gets rather worse. But for the timing and unseasonable heat, Anne would have been transferred from the table in Rosings to her casket, the service would have taken place in the drawing room with no ladies present, and the casket would then travel via black-draped hearse to the de Bourgh family crypt in the Hunsford churchyard. Pallbearers would have carried the casket from the hearse to the crypt.

As it was, Anne’s “eternity box” (coffin) had to be built quickly around her, even in the cool cellar. It was built by a “cold cook” (undertaker). Yes, “Eww” again as needed. The cold cook and his assistants carried her casket to the lych-gates in front of the church. These were covered structures under which the caskets were perched before the pallbearers came to carry them inside the church for the service.

The number of carriages in a funeral procession denoted high rank—more carriages (even if they were empty!) indicated a higher regard for the dead. Imagine Lady Catherine’s surprise when Darcy reminds her his father’s procession had a mere ten carriages:

“No, only ten. It was but three miles from Kympton to the family vault at Pemberley. We did not wish for the cortege to meet itself coming and going.”

But of course, Darcy would not wish to appear pretentious in making his father’s arrangements. However, he did agree with his aunt in the use of “mutes”: leather booties (presumably black) worn by horses in a funeral procession to dampen the vulgar clop-clopping. Procession horses also wore special, non-clinking bridles. This give Lady Catherine a chance to show-off her daughter in death as she never could in life, what with Anne’s weak constitution and all.

After the services, which for the upper classes never included the ladies of the family, a “shoulder-feast” would have been held to honor the pallbearers (who carried the casket on their shoulders). Anne’s pallbearers were: “…Mr. Fitzwilliam Darcy; Colonel Alexander Fitzwilliam; Theodore Fitzwilliam, the Earl of Matlock (Colonel Fitzwilliam’s father); James Fitzwilliam, the Viscount Scofbridge (the colonel’s elder brother and the earl’s heir); Kenneth Sapwater, Lord Dirthbevridge (elder brother of Regina, Countess of Matlock), and Sir Everett Sapwater (Lord Dirthbevridge’s eldest son).” [Okay, I admit I had fun making up names–lb]

In 1812, the Archbishop of Canterbury was—and this is the truth—Charles Manners-Sutton. For the purposes of this story, Darcy’s paternal grandmother was a Manners, making Darcy the Archbishop’s distant cousin. The following is also true: his eminence had twelve children, ten daughters and two sons. Such research as I had time for did not reveal the birth order of these children. Try as I might, I could not finagle the plot to include a conversation in which the Archbishop could advise Mr. Bennet (with his mere five daughters) that Mr. Bennet should have kept trying. But this is simply a silly side shoot, and did not bear fruit (of either sex).

After the shoulder feast, dignitaries of the local neighborhood could have been invited around for somber refreshments. In A Will of Iron, it is in this scene we first bring Elizabeth and Darcy back together, although both have espied each other without the other knowing. He watches Elizabeth from the safe distance of a sitting room at Rosings:

“I have seen her, and I do not appear to love her any less than I did seven days ago. Yet I know myself better, and her too. I must see her happily settled…”

Elizabeth is reading about Darcy in Anne de Bourgh’s journal while sitting in the vicarage garden, when his carriage rolls to a stop to acknowledge the welcoming Mr. Collins:

“Her observation could not completely restore Elizabeth to her former dislike of Darcy, or anything near it. She felt a sinking sensation. There had been no doubt she would see him again, but with Anne de Bourgh’s insight and the forlorn gentlemanly tone of his voice, she found within herself naught but forbearance and a desire to comfort.”

But back to funerals… Let me leave you with one last disgusting intriguing nugget. Plumbers were often called in to fashion caskets for those to be “interred out of the usual way”. I have NO idea what that means, and I find myself holding my hands over my eyes.

You’re saying, “Enough already!” Yes, I’ll stop. But I have not given all of the gruesome traditions and terms away, and I’ve only hinted at the romance. I hope you will all laugh, and cry, and say “Ewww!” as you enjoy A Will of Iron.

It is a pleasure to have you here, Linda! Wow! Thank you for the fun and a bit gruesome post! You certainly have piqued my interested in A Will of Iron! I am also intrigued in Anne's journal! I can't wait to see what she has written in there. 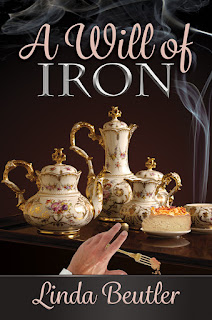 The untimely death of Anne de Bourgh, only days after his disastrous proposal at the Hunsford parsonage, draws Fitzwilliam Darcy and his cousin Colonel Alexander Fitzwilliam back to Rosings Park before Elizabeth Bennet has left the neighborhood. In death, Anne is revealed as having lived a rich life of the mind, plotting rather constantly to escape her loathsome mother, Lady Catherine de Bourgh. Anne’s journal, spirited into the hands of Charlotte Collins and Elizabeth, holds Anne’s candid observations on life and her family. It also explains her final quirky means of outwitting her mother. Anne’s Last Will and Testament, with its peculiar bequests, upheaves every relationship amongst the Bennets, Darcys, Fitzwilliams, Collinses, and even the Bingleys! Was Anne de Bourgh a shrewder judge of character than Elizabeth Bennet and Fitzwilliam Darcy combined? 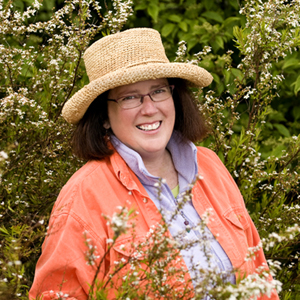 Linda Beutler is an Oregon native who began writing professionally in 1996 (meaning that is when they started paying her...), in the field of garden writing. First published in magazines, Linda graduated to book authorship in 2004 with the publication of Gardening With Clematis (2004, Timber Press). In 2007 Timber Press presented her second title, Garden to Vase, a partnership with garden photographer Allan Mandell. Now in 2013 Linda is working with a new publisher, and writing in a completely different direction. Funny how life works out, but more on that in a minute.

Linda lives the gardening life: she is a part-time instructor in the horticulture department at Clackamas Community College, writes and lectures about gardening topics throughout the USA, and is traveling the world through her active participation in the International Clematis Society, of which she is the current president. Then there's that dream job--which she is sure everyone else must covet but which she alone has--Linda Beutler is the curator of the Rogerson Clematis Collection, which is located at Luscher Farm, a farm/park maintained by the city of Lake Oswego. They say to keep resumes brief, but Linda considers Garden With Clematis her 72,000 word resume. She signed on as curator to North America's most comprehensive and publicly accessible collection of the genus clematis in July 2007, and they will no doubt not get shut of her until she can be carried out in a pine box.

And now for something completely different: in September 2011, Linda checked out a book of Jane Austen fan fiction from her local library, and was, to put it in the modern British vernacular, gobsmacked. After devouring every title she could get her hands on, she quite arrogantly decided that, in some cases, she could do better, and began writing her own expansions and variations of Pride and Prejudice. The will to publish became too tempting, and after viewing the welcoming Meryton Press website, she printed out the first three chapters of her book, and out it went, a child before the firing squad. Luckily, the discerning editors at Meryton Press saved the child from slaughter, and Linda's first work of Jane Austenesque fiction, The Red Chrysanthemum, published in September 2013. Her second work of fiction, From Longbourn to London was published in August of 2014.

Linda shares a small garden in Southeast Portland with her husband, and pets that function as surrogate children. Her personal collection of clematis numbers something around 230 taxa. These are also surrogate children, and just as badly behaved.

It's giveaway time!! Meryton press is giving away one paperback copy of A Will of Iron to one lucky person!  To enter, fill out the Rafflecopter below and leave a comment.

Many thanks to Meryton Press!


Please, leave a comment! We'd love to hear from you! Remember, to enter the giveaway you MUST fill out the Rafflecopter (shown above). If you need help entering, email me by clicking on the email icon at the top of the sidebar. Thanks!