Emma Knows All by Laura Briggs and Sarah Burgess ~ Excerpt

Hey, Austenesque Friends! Laura Briggs and Sarah Burgess, authors of Dear Miss Darcy and Ask Eleanor, have come out with a new Austenesque story called Emma Knows All! It sounds really cute, and I will be reading and reviewing it soon. 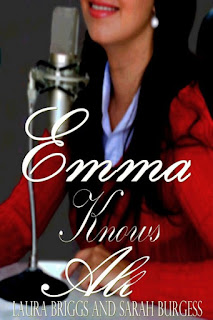 Emma Benton—known as ‘Doctor Emma’—has a knack for advising the lovelorn and lonely on her radio show Heart Therapy. Em’s sympathetic manner and spot-on instincts provide the perfect answers, or so claims her boyfriend, the handsome and clever psychologist Frank, her producer Isabel, and her ever-expanding audience of listeners.

But Doctor Colin Ferris disagrees. During a guest segment on Em’s show, he challenges her advice on the air and offends her personally in their brief, private exchanges. Rude and pretentious, he’s the last person Em would imagine as the author of a best-selling guide on being a gentleman in modern times. He’s also the last person she would choose to work with—but Fate makes that decision before Em can avoid it.

In her worst PR nightmare ever, Em finds herself paired with Colin in a reality show quest to help a romantically-challenged young woman. Shy, awkward Harriet Smith needs more than just a little advice, but can two people so vastly different in their opinions really help her? As Em struggles to find common ground with Colin, she learns there’s more to him than meets the eye…and maybe more between them than opposing ideas about love.

He was waiting for her at the restaurant. A noisier spot than Em would normally pick, but it was the closest lunch spot to the station. He looked out of place in his suit and tie — did he ever wear anything else? — as he sat at a table for two in the middle of the skylight dining area.
She exhaled deeply, then approached. "Doctor Ferris," she said, sliding into the chair across from him.
"I was surprised by this invitation —" he began, but Em didn't let him finish.
"Look, doctor, I won't waste your time. I asked to meet you here because I want to change your mind about agreeing to this — this ludicrous suggestion by the station to pit us against each other on the air again."
Behind those square-framed glasses, she saw a flicker of surprise in the dark eyes. "You do," he stated, flatly. "I would have thought the suggestion would have appealed to you."
"Well, it doesn't," she answered. "I have to confess, I'm astonished you actually agreed to do it. Did you? Or did I misunderstand my boss?"
"I did," he answered, calmly.
"Then you want us to be paired up for some kind of matchmaking contest?" Em's voice couldn't contain either her disgust or astonishment.
"No. Of course not," he answered, sounding equally revolted for a split-second. "I think it's a horrible idea. But I can't refuse. My agent insists. I'm not the easiest client to engage in public relations, so I'm rather limited now on what I can refuse."
That he regretted refusing less repulsive ideas than this one was evident in his voice. Em, however, didn't soften towards him in response.
"You hate the idea also, I gather?" he asked, dryly.
"Hate is a strong word. But maybe not strong enough." A shadow of a grin on Em's face before she grew serious again. "No, it's better than cheapening my show with a gimmick. But the thought of us paired up together for six weeks, like the psychology version of  What Not to Wear..."
"Six weeks? I thought it was eight. Thank God." Her lunch companion's stony expression relaxed slightly.
"Feeling better?"
"A little, Miss Benton."
"You really should stop calling me that." Em hesitated. "Enough with the formalities. Since we're going to be working together for awhile, you should call me something else."
"I'm not calling you 'Doctor Emma,'" he answered, with a slight grimace.
"Fine." She shrugged. "Emma is good, or Emmy —" She saw him blench again at this second suggestion, "Or Emma," she concluded, politely — if by a thread.
"Emma, then," he answered.
"And I'll call you Colin. Is that all right?"
With a twinge of pain, she thought of an old joke of her father's, about calling him any name in the book, just don't call him her mother's husband.  Maybe Doctor Ferris found it insulting, to have a quack-psychiatry radio therapist call him by his first name. If so, he showed no sign of it this time.
"Of course," he answered. "Apparently, we're colleagues now." He said it in a tone of voice that made it sound like a bad joke. "In that spirit, Emma, I think we're in agreement on three subjects. First, that this project is barbaric. Second, that we're hardly qualified to be meddling in this young woman's love life. Third, that we both want to get through this as quickly and gracefully as possible, for the sake of our respective careers."


She was astonished by this speech, the longest and friendliest he had ever made in front of her. "Agreed," she answered.