Hey, Everyone! I'm thrilled to be part of the Miss Georgiana Darcy of Pemberley Virtual Blog Tour! On this stop of the tour, you'll read a delightful interview, and you'll have a chance to enter a wonderful giveaway! Details about the giveaway are located at the bottom of this post.

So without further ado...

Thank you, Candy, for inviting me here today to share a little bit about my new book: Miss Georgiana Darcy of Pemberley. I thought it would be fun to let Georgiana speak for herself, though, via this recent interview!

After his inauspicious beginning as a clergyman, William Collins has successfully reinvented himself as a talk show host – a profession to which he is much better suited. His specialty is interviewing literary figures of some renown, and today he congratulates himself on having secured an exclusive with Miss Georgiana Darcy of Pride and Prejudice fame.

Collins: Welcome, Miss Darcy. I appreciate your agreeing to speak with me today, especially since I know you almost never grant interviews.

Miss Darcy: That is true, Mr. Collins. Although I have come a long way since the crippling shyness of my youth, I still generally prefer to avoid the spotlight. I was willing to make an exception in this case, however. After all, you and I share a common history.

Collins: Very true. And as for this little visit, just think of it as two old friends having a chat over a cup of tea. Give me your full attention and I daresay you will barely notice the lights, cameras, microphones, etc.

Miss Darcy: I will bear your advice in mind, Mr. Collins. The important thing is that I be allowed to set the record straight about this new book, Miss Georgiana Darcy of Pemberley.

Collins: Of course. Rumors have been circulating. Some sort of conflict between you and the author they say.

Miss Darcy: I have heard these rumors too, unsubstantiated tales of how I supposedly badgered and bullied Ms. Winslow into writing the book to flatter my vanity or some such nonsense.

Collins: No truth in the idea, then?

Miss Darcy: Certainly not! In fact, the situation was quite the reverse. Ms. Winslow told me it was her own conscience that demanded she write the story. I am sure she will bear me out on this if you asked her.

Collins: Her conscience? How so?

Miss Darcy: As she explained it to me, she had been feeling for a long while like she hadn’t given me and my courtship story ‘enough space on the page’ in The Darcys of Pemberley. I believe those were her exact words.

Collins: Ah, now we’re on to something. What about that, Miss Darcy? You can tell me. You were secretly dissatisfied with the first book, weren’t you?

Miss Darcy: Good heavens, no! I liked TDOP very well indeed! (That’s often how we in the business refer to it, you know: TDOP.) And my supporting role in the book suited me exactly at the time. I was given the honor of inclusion without anybody prying too much into my personal thoughts and actions. But I am older now, and more confident. So I was perfectly willing to take a more prominent part this time when Ms. Winslow suggested it.

Collins: Well, then, if you say your relationship with Ms. Winslow is on amicable terms, I suppose I must believe you. So, even if this new book was not your idea, I understand you did have a tremendous amount of input – hours and hours of detailed conversation with the author, I am told.

Miss Darcy: That is correct. How else would she have known what really happened? With the earlier book, she was so focused on my brother and Elizabeth that she had no opportunity to delve very deeply into my side of the story, specifically what was going forward in my world when I was “off camera,” so to speak.

Collins: It sounds as if the process of setting down your full story was as much a revelation to Ms. Winslow as it will be to her readers.

Miss Darcy: I believe that is the case. Of course the same was true for me when I read The Darcys of Pemberley. That was the first time I really understood what I had missed whilst I was away in London and what had been said behind closed doors those times I was not present. It is only when the two books – TDOP and now MGDOP – are put together that one has the complete story, a more well-rounded picture.

Collins: Innovative concept. Now, I regret to say that we are almost out of time, Miss Darcy. Am I correct in calling you ‘Miss Darcy,’ by the way? You are a married lady, of course. After all, your courtship story, which is the primary topic of the book we have been discussing, concluded with a wedding, according to my briefing, but only after a well-fought campaign between your worthy suitors. And may I say that I was not surprised at hearing of your having had as many as three men in love with you at once.

Miss Darcy: You flatter me, sir. You may not be surprised, but I was – surprised and amazed! They are all very fine gentlemen too, in their own ways, and I hated to disappoint any one of them. I can tell you it made for many shed tears and sleepless nights before things happily sorted themselves out for the best. To answer your question, though, I continue to use my maiden name for professional purposes. It saves confusion and prevents spoiling the ending for those who have not yet read the story.

Collins: Of course. So it is “happily ever after” again for you, I suppose. But what I want to know is if I fare any better in this book than the last. I don’t mind telling you I was shocked to discover four years ago how quickly, and by what undignified means, Ms. Winslow saw fit to dispose of my character in The Darcys of Pemberley. And I admit that I haven’t yet had time to read this new release. It is a variation, so presumably there are differences. Perhaps the author had second thoughts and has now corrected her previous error. Yes?

Miss Darcy: Oh, dear. I’m sorry to disappoint you, Mr. Collins, but that simply is not the case. Although Miss Georgiana Darcy of Pemberley is written from an entirely different point of view and encompasses mostly new material, the basic facts have not changed. The two books must agree in the end.

Collins: I see. Well, I cannot say that I much admire that unfortunate aspect of the project, but perhaps there are other redeeming values making the book worth reading. In any case, Miss Darcy, I must thank you for being my guest today and wish you continued success in all your future endeavors.

Miss Darcy: How kind of you to say so, Mr. Collins. It has been my pleasure, I assure you. 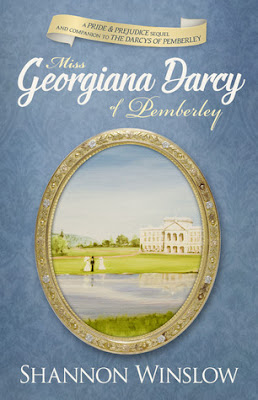 What’s Georgiana Darcy’s story? Jane Austen tells us so little in Pride and Prejudice that we’re left to wonder. How did the early loss of her parents shape Miss Darcy’s character? And what about her near-disastrous affair with Mr. Wickham? Is that the true source of her shyness? She adores her brother and his new wife Elizabeth, but will their guiding influence be enough to steer Georgiana clear of new trouble as she comes of age and falls in love again?

This work is intended as a companion of sorts to The Darcys of Pemberley (sequel to Pride and Prejudice), with the timelines of the two running parallel. Both novels are unique and complete in themselves, but together they supply a richer reading experience than either one alone. The earlier book focused primarily on Darcy and Elizabeth’s relationship during their early married life. There was a third Darcy represented in the title, however. Now she and her courtship story take center stage in Miss Georgiana Darcy of Pemberley.

FTC Disclaimer: Link to Amazon. I am an Amazon Associate. Should you purchase a copy of the book through the link provide, I will receive a small commission. Thanks! 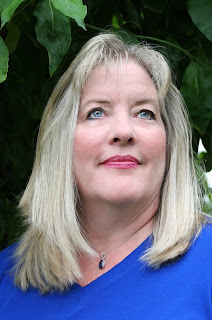 Shannon Winslow specializes in writing fiction for the fans of Jane Austen. Her popular debut novel, The Darcys of Pemberley, immediately established her place in the genre, being particularly praised for authentic Austenesque style and faithfulness to the original characters. Since that bright beginning, the author has followed with two more Pride and Prejudice sequels (Return to Longbourn and Miss Georgiana Darcy of Pemberley), a stand-alone Austen-style story (For Myself Alone), and a novel starring Jane Austen herself (The Persuasion of Miss Jane Austen). With no shortage of inspiration, Winslow promises more romance and happy endings to come.

Her two sons now grown, Shannon Winslow lives with her husband in the log home they built in the countryside south of Seattle, where she writes and paints in her studio facing Mt. Rainier.

For more stops on this Blog Tour, you can click here!

It's giveaway time! Shannon is very generously giving away ONE signed paperback (U.S. only) and TWO e-copies (Internationally) of
Miss Georgiana Darcy of Pemberley!
To enter, fill out the Rafflecopter below and leave a comment.


Many thanks to Shannon Winslow for being a guest on So little time...! It was a pleasure to have her here, and I so enjoyed her interview with Mr. Collins and Georgiana!

Remember, to enter the giveaway you MUST fill out the Rafflecopter (shown above), and leave a comment. If you need help entering, email me by clicking on the email icon at the top of the sidebar. Thanks and good luck!
Posted by Candy @ So little time... at 12:30 AM