Hello, friends! I'm very excited to have Mark Brownlow visiting us today! His new book Cake & Courtship is a Pride and Prejudice variation from Mr. Bennet's point of view. Which, to tell you honestly, is something I had never thought of before. I've always loved Mr. B's dry sense of humor! Well, I've started reading Cake & Courtship, and I'm really enjoying it!

I hope you find Mark's post as amusing as I did! And be sure to read to the bottom of the post! There you'll find details about the giveaway! 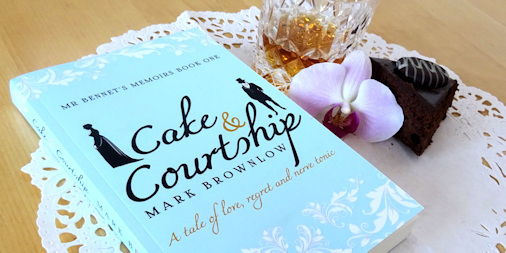 Thanks, Candy, for hosting me today!

My novel, Cake and Courtship, began life as something completely different: a tongue-in-cheek copy of Mr Bennet’s diary for a book of Austenesque humour. As we near the end of the blog tour, I thought it might be entertaining to resurrect some of those original diary entries.

So put out the port, cut yourself a slice of sponge cake and open the journal of one Mr James Bennet of Longbourn, father to five daughters and husband to one wife. Unfortunately, only a few pages have survived…

[Ed: This entry pre-dates the events of Pride and Prejudice. The final sentence suggests it was not Mr Bennet’s first on the topic of fashion.]

Lydia returned from Meryton yesterday with another collection of ribbons from Craddocks.

These items of clothing remain a mystery to me. A ribbon enjoying a wealth of admiration one day may become a subject of studied indifference but a few weeks later. I made enquiries at the society, but none of the gentlemen could offer an adequate explanation. Similar enquiries among the girls merely led to a collective rolling of the eyes and exclamations of “Oh, Papa”.

It seems there are subjects on which a father must remain ignorant (see last month’s note on bonnets).


[Ed: This entry seems to anticipate events at the Netherfield Ball.]

Spent the day with an unfortunate headache brought on by an excess of Sir William’s brandy. Mary’s endeavours to coax some form of melody from the pianoforte only made matters worse. As a consequence, I wrote to Herr Beethoven asking if he might compose a requiem for me. It is the least he can do, since my middle daughter’s attempts to play some of his arrangements may very well lead to my untimely demise.


[Ed: We were fortunate to find some entries relating to Mr Bennet’s time in London, looking for Lydia and Wickham after their elopement.]

I decided to proceed with my search systematically, beginning with the most obvious locations for a man of Wickham’s disreputable character: the gambling dens. Mr Jackson furnished me with a list of addresses; his nefarious youth has finally proved to be of some use. Though I do wonder whether his memory (and the gambling dens) have survived the intervening thirty or so years fully intact.

Jackson’s list proved as useful as a butterfly net on a whaling ship.

The second address was unmistakably a fishmonger, a disappointment which at least proved brief and allowed the procurement of some rather fine haddock for the Gardiners’ cook.

The third address was the home of a Mr Mortimer Willcott, who, as it turns out, is a very late sleeper with an ugly temper.

The fourth address was indeed a gambling den, though dice and cards were merely one of the diverse entertainments available. I was introduced to a somewhat mature, overdressed lady named Madame Felice, who enquired most politely as to my needs. After I asked after a young man named Wickham, she inexplicably answered “I’m sure we can manage something”. She then disappeared upstairs, leaving me in the hands (and I use that phrase in all its ambiguity) of a young lady named Persephone. I left immediately.


[This entry is undated but likely to be sometime before or during the events of Pride and Prejudice, since Lydia is named.]

Much excitement at home with the arrival of a party of gentlemen in Meryton. According to a reliable source (Mrs Bennet), they are passing through on their way to London for some modest entertainment put on by the Prince Regent.

There was some argument concerning the gentlemen’s titles and how the party should be addressed by Kitty or Lydia. I pointed out the futility of the conversation given an introduction was impossible. I may also have mentioned that no titled gentleman would see fit to fall for a Bennet girl from an entailed estate.

Once again, I was punished for my honesty. My wife declared me cruel, saying “Oh, Mr Bennet. How can you ruin all our hopes so? You have no understanding at all.”

Yet it was precisely my superior understanding that caused me to “ruin” their hopes. I chose to remain silent on that point. Wisely it seems, for my wife continued in her usual understated manner, fleeing the room in tears to tend to her nerves upstairs. I anticipate another bill from Mr Jones shortly.


I spent the rest of the day classifying my dragonflies, an activity that carried little risk of offending anybody. Mind you, I recall an incident at the Meryton Natural History Society when Fielding and Stanhope fell into argument over the correct spelling of the silver-washed fritillary. The ensuing duel was no less impressive for the protagonists’ use of insect pins rather than swords. It only ended when Stanhope backed into a recently-acquired narwhal skull. I shall never forget the look of shocked surprise on his face. 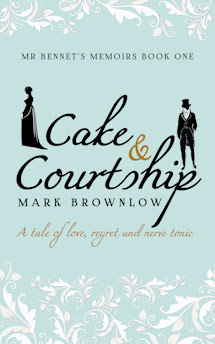 When John Barton falls in love with the elusive Anne Hayter, there is only one man he can turn to for advice. Unfortunately, that man is Mr Bennet of Longbourn, a world-weary gentleman with five daughters pursuing their own marital ambitions.

To help John, Mr Bennet must emerge from his beloved library and face the challenges of the tearoom and dance floor one more time. In doing so, he finds his own romantic past catching up with him.

In this Pride and Prejudice variation, Mark Brownlow takes you on an Austenesque journey full of wry humour and Regency romance (with a few slices of sponge cake).

“As you get older, Lizzy, you will discover that life does not bow easily to the wishes of even the most romantic of souls. Quite the opposite. Life must be mastered with pragmatism and sense, which explains why so few people succeed at it.“


Cake and Courtship is a standalone story, but also the first book of Mr Bennet’s memoirs. Look out for the sequel in 2018. 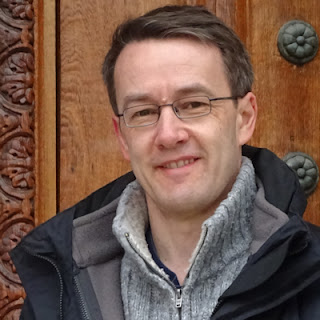 Mark Brownlow is a British-born writer living in Vienna, Austria. His debut novel, Cake and Courtship, is a Regency romance narrated by Pride and Prejudice’s Mr Bennet. He has also written a novella, The Lovesick Maid, a cozy mystery set in Jane Austen’s fictional village of Hunsford. You can find Mark at LostOpinions.com, where he is known for his reimagining of classic literature as emails.

Science degrees from the Universities of Oxford, Aberdeen and Reading prefaced a short-lived career as a research academic. Since turning from facts to fiction, Mark has also worked as a translator, agony aunt, marketing consultant, journalist, business writer, web publisher and copywriter. None of which kept his soul happy in the way that creative writing does. When not writing, he works as a part-time lecturer in medical and scientific English at a local university.


If there is no pen to hand, he can be found watching his kids play football or sharing a glass of wine with his wife in front of a costume or historical drama.

It's giveaway time! Mark Brownlow is generously offering one of my readers a choice of paperback of Cake & Courtship or some Viennese chocolates! Wow! Thanks, Mark! To enter, please leave a comment below! 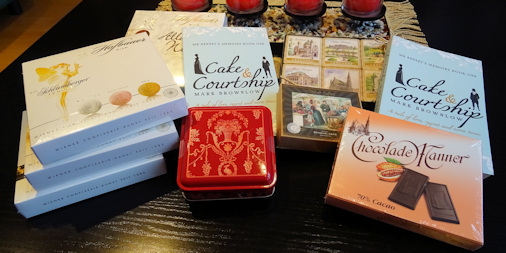 A special thanks to Mark Brownlow for stopping by So little time... today, and for his lovely giveaway! Also, congratulations of the release of Cake & Courtship!

So, what do you think, didn't you love the diary entries? Have you ever read a book from Mr. B's POV? Do you have any questions for Mark?